Latest Updates on the Southern Front of Hudaydah and Marib, 20 November 2021 (Map Update) 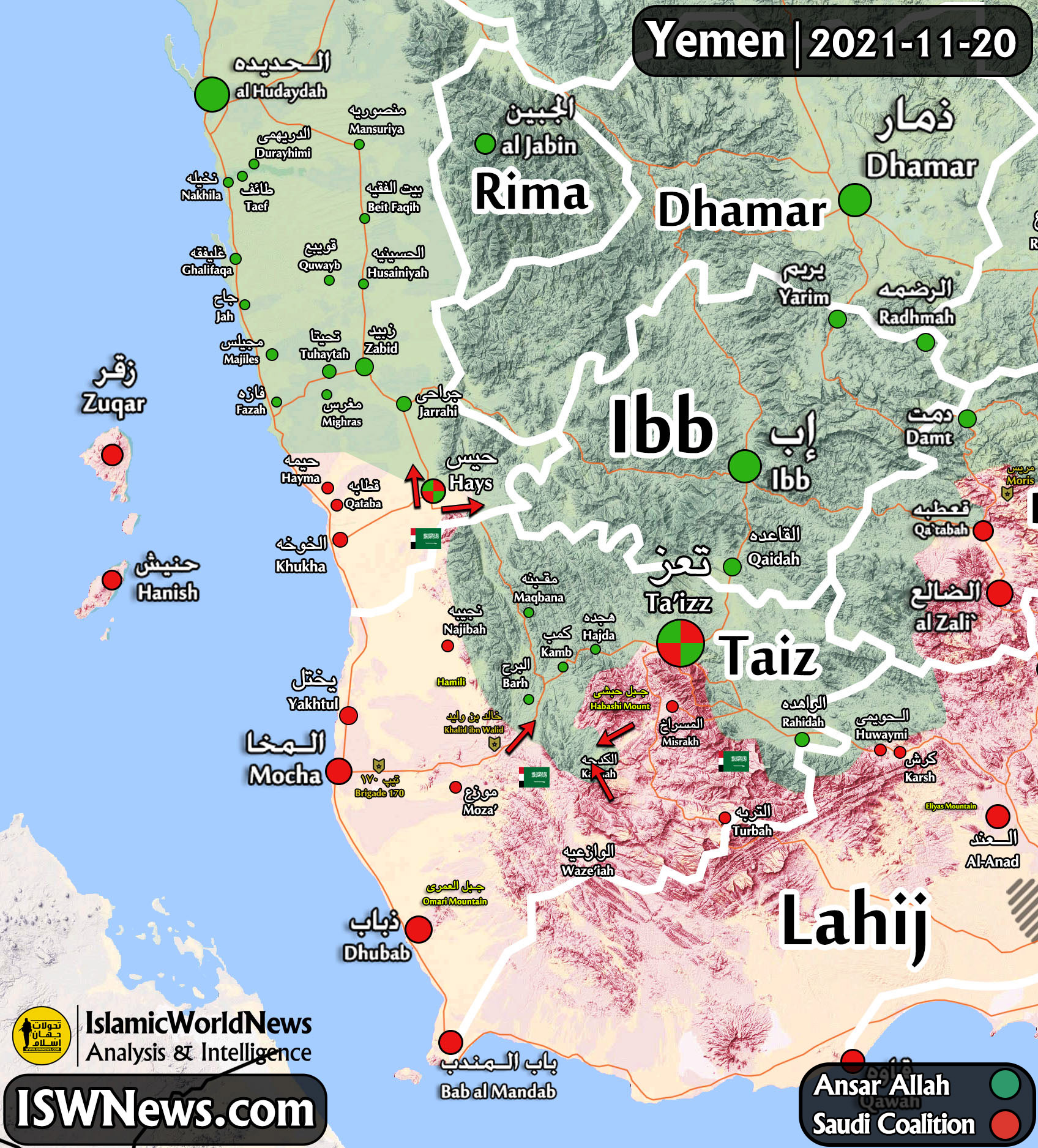 ISWNews Analysis Group: Heavy clashes between Ansar Allah and Saudi-led forces continue on the southern front of al-Hudaydah province, as well as the southern and western fronts of Marib province.

On November 18, Tariq Saleh forces with support of the Saudi coalition and accompanying STC forces, have launched an operation called “Golden Arc” on three axes of Hays in the south of al-Hudaydah province, Wazi’yah region and Habashi mountain in the west of Taiz province.

Currently, clashes are taking place around the town of Hays and the al-Kadhah area in the west of Taiz province, and Tariq Saleh forces have not made much progress on the mentioned fronts. The areas mentioned in the media as the advance of the Saudi coalition have not been under Ansar Allah control in the past, and the Saudi coalition media exaggerates in this regard.

Ansar Allah has also launched heavy missile and drone strikes against the positions and gatherings of Tariq Saleh forces since yesterday evening. According to Ansar Allah media, more than 125 members of the Saudi coalition have been killed and wounded as a result of the attacks.

On the Marib front, clashes are taking place near the Falaj al-Gharbi, Balaq al-Sharqi and Balaq al-Awsat heights, as well as Tala’at al-Hamra and Wadi Nakhla area, And Saudi coalition warplanes are constantly bombing these areas to prevent Ansar Allah advancement.

In general, by activating the fronts in the south of al-Hudayidah and the west of Taiz, the Saudi coalition intends to reduce Ansar Allah’s pressure on Marib, which has been successful so far. Ansar Allah must capture or destroy the military posts and bases in the Khokha and Mocha areas in order to defeat the attacks of Tariq Saleh. To break the coalition resistance in Marib, it also needs to attack from several axes (east of al-Jawf, south and west of Marib), which requires extensive manpower and military equipment.