US: We will not punish the perpetrators behind the UAV attack against civilians in Kabul! 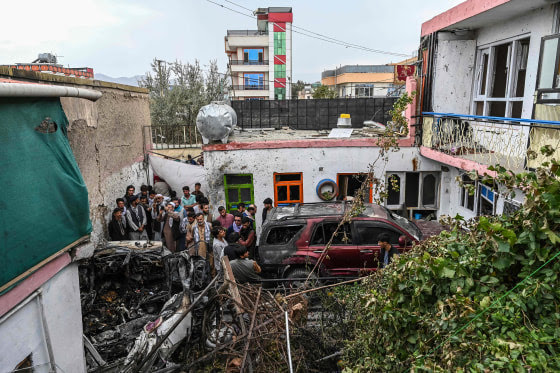 ISWNews Analysis Group: Lloyd Austin, United States Secretary of Defense, in a talk with the New York Times said that the perpetrators behind the attack against civilians will not be punished

United States Secretary of Defense with complete obscenity has announced that the military personnel who were behind this UAV attack, against a house in Khaje Baghra in Kabul which led to the martyrdom of several civilians including 7 children, will not be punished. He added that he made this decision because two high-ranking US Army commanders requested it.

While operating this attack the United States Army at that time claimed that the target was an ISIS-K hide-out. However after the attack, on August 19, the US Army accepted that the victims were civilians and apologized!

After this crime, The United States Air Force inspector general, lieutenant-general “Sami D. Said”, began investigating the incident. the Inspector General of the Air Force in his final report announced that in this attack Laws of War were not violated, also the military personnel did not commit negligence or abuse in this attack. Therefore there will be no disciplinary action.

On the other hand, the critics from International Organizations about this attack have increased. for instance, Dr. Steve Kwon, the president of Nutrition & Education International (NEI), in an interview with an American channel said “How can our military wrongly take the lives of ten precious Afghan people, and hold no one accountable in any way?” Kwon asked. In a statement, NEI founder and president Dr. Steven Kwon called the decision not to punish anyone for the drone strike “shocking.”

It needs to be mentioned that the American and NATO forces during their 20 years of occupation of Afghanistan have frequently targeted and killed civilians, women, and children, but the perpetrators of these crimes faced no trial or punishment.

All of Afghanistan (The Graveyard of Empires), From a marriage ceremony in southern Afghanistan to the Grand Mosque of Dasht-i-Archi in the north, have tasted the fire of the American airstrikes. In their so-called “wrong attacks” they have taken the lives of many women and children and faced no punishment.

The last crime of America in Afghanistan was the UAV attack against Afghan civilians in Khaje Bughra, Kabul airport’s countryside, which led to the martyrdom of 10 Afghan people ( or 12 according to a source). The US Army murdered 7 innocent children and didn’t hold itself accountable to the family of victims and the International Organizations. Of course, this shamelessness of the American is no surprise to the world, because the nature of the American military forces is occupation, savagery, and murdering civilians, both women and children.