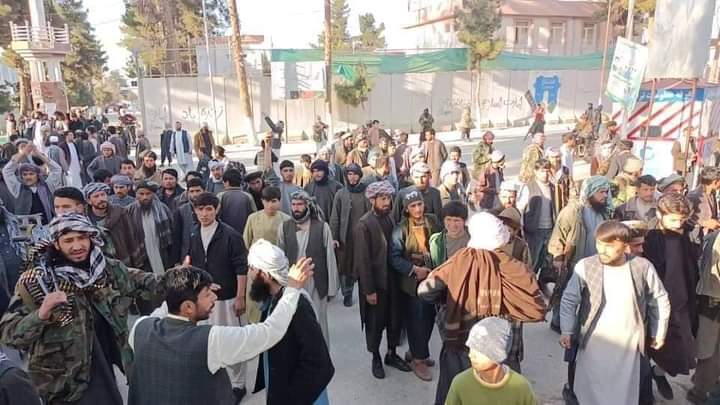 ISWNews Analysis Group: Nine people have been killed and wounded in clashes between Uzbek and Pashtun Taliban members in Faryab province.

According to local sources, protests and rallies against the Taliban in the city of Maimana resumed after the deadline announced by supporters of Mulavi Makhdoom Alam for his release has ended.

The protests escalated into an armed conflict with the arrest of two other non-Pashtun Taliban commanders, Qari Wakil and Damla Shir Mohammad Ghazanfar, for allegation of collaborating with ISIS. As a result, a Taliban commander named Mullah Janan (from the Pashtuns of Almar district) and one civilian were killed and four Pashtun Taliban and three Makhdoom Alam supporters were wounded.

The Taliban media are now reporting peace and security in the city of Maimana. Mulavi “Ataullah Omari”, the commander of the 209th Fatah Corps and the person in charge of investigating the riots in Faryab, also announced the release of Makhdoom Alam and denied the continuation of the riots in Faryab. However, local sources have denied this news and reported the continuation of clashes and insecurity in the city of Maimana.

According to ISWNEWS field source, the unrest spread to Sar-e-Pul and Jawzjan provinces after the arrest of other Tajik and Uzbek Taliban commanders, and the central government sent a large contingent of reinforcements to Faryab province.