Imam Khamenei in a meeting with Putin: Americans should leave the region east of the Euphrates in Syria 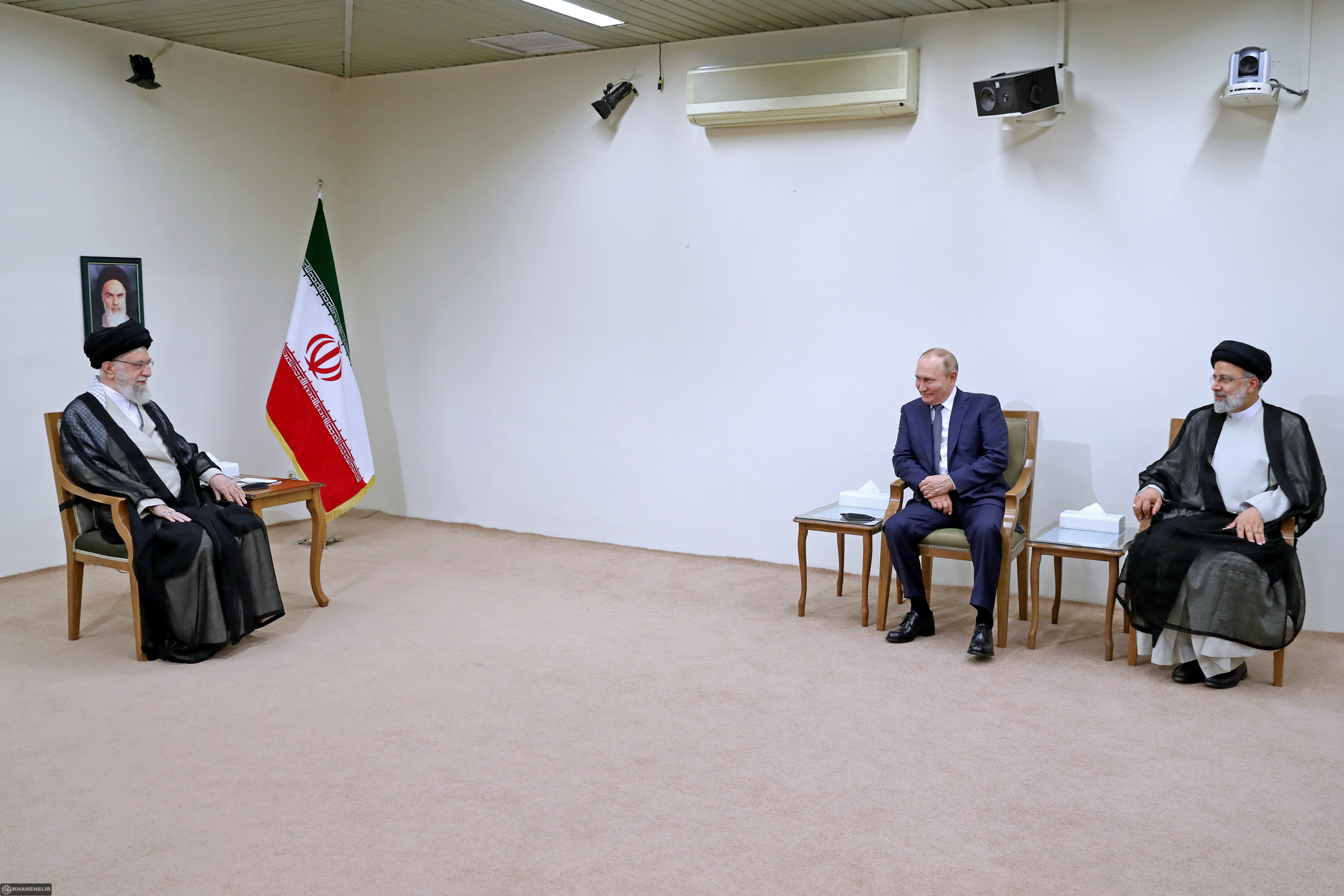 ISWNews Analysis Group: Russian President Vladimir Putin met and discussed with Imam Khamenei, the Leader of the Islamic Revolution, about bilateral issues and the region of West Asia and Europe in Tehran.

Imam Khamenei, the Supreme Leader of the Islamic Revolution, in his meeting with Mr. Vladimir Putin, the President of Russia and the accompanying delegation, emphasized the necessity of operationalizing the understandings and contracts between the two countries and considered long-term cooperation to the benefit of both countries. In this meeting, Imam Khamenei pointed out the necessity of increasing and mutual cooperation between Iran and Russia in global events and confronting Western sanctions, and added: “There are many understandings and agreements between the two countries, including in the oil and gas sector, which must be operational and followed up to the end. Your Excellency and our president are both action-oriented and follow-up, so the cooperation between the two countries should reach its peak in this period.”

After confirming the words of the President of Russia about the necessity of starting the Rasht-Astara railway line, he considered this work to complete the North-South transportation line and benefit both countries.

Imam Khamenei said about the events in Ukraine: “War is a harsh and difficult category, and the Islamic Republic is not at all pleased that ordinary people suffer from it, but in the case of Ukraine, if you did not take the initiative, the other side would cause a war with its own initiative. Westerners are completely against a strong and independent Russia. NATO is a dangerous entity and knows no boundaries if the way is open to them, and if it was not stopped in Ukraine, they would have started the same war some time later under the pretext of Crimea. Of course, today America and the West have become weaker than before, and despite the great effort and expense, the success of their policies in our region, including in Syria, Iraq, Lebanon, and Palestine, has been greatly reduced.”

He added: “It is necessary to be vigilant against the deception of the West. The Americans are both forceful and cunning, and one of the factors of the collapse of the former Soviet Union was being deceived in front of American policies, although Russia has maintained its independence during your highness’s period.”

The Leader of the Islamic Revolution, Ayatollah Khamenei, condemned the interference of the Zionist regime in the affairs of the region, praised the recent positions of the Russian President against the Zionists, and emphasized the position of the Islamic Republic of opposing a military attack on Syria and the need to prevent it, saying: “Another important issue in Syria is the occupation of the fertile and oil-rich areas east of the Euphrates by the Americans, which should be resolved by expelling them from that area.”

He further emphasized: “The Islamic Republic will never tolerate policies and programs that lead to the closing of the border between Iran and Armenia.”

Imam Khamenei also approved the policy of replacing national currencies in the relations between the two countries and using other currencies instead of the dollar, saying: “The dollar should be gradually removed from the path of global transactions, and this is possible gradually.”

In this meeting, Vladimir Putin also said about the war in Ukraine: “No one is in favor of war and the loss of lives of ordinary people is a great tragedy, but the behavior of the West made us have no choice but to react.”

Enumerating the factors and roots of the differences between Russia and Ukraine, especially the provocative actions of the West and the United States in recent years, including the coup in Ukraine, as well as NATO’s expansion policy despite their previous commitments to avoid any advance towards Russia, Putin said: “Some European countries said that we were against Ukraine’s membership in NATO, but we agreed to it under American pressure, which shows their lack of sovereignty and independence.”

The President of Russia considered the assassination of General Soleimani as another example of the evils of the Americans, and in another part of his speech, referring to Western sanctions against Russia, he said: “These sanctions are to the detriment of the West, and the result is problems such as the increase in oil prices and the food supply crisis. The US abuses the dollar tool to embargo and loot other countries, and this ultimately harms them and weakens global trust in this currency. Also, countries are going to use alternative currencies and we are designing new ways to use national currencies in the relations between the two countries.”

Confirming the position of the Leader of the Revolution regarding the Caucasus region, the President of Russia called the positions of the two countries on the Syrian issue, including the opposition to the military attack on the north of this country, completely compatible with each other and said: “The region east of the Euphrates should be under the control of the Syrian military forces. Iran and Russia are jointly fighting terrorism in Syria, and in the military field, we are also trying to develop cooperation between the two countries, as well as trilateral cooperation and maneuvers with China.”

Read more: Imam Khamenei in a meeting with Erdogan: Any military attack in northern Syria will definitely be detrimental to Turkey, Syria and the entire region