Imam Khamenei in a meeting with Erdogan: Any military attack in northern Syria will definitely be detrimental to Turkey, Syria and the entire region 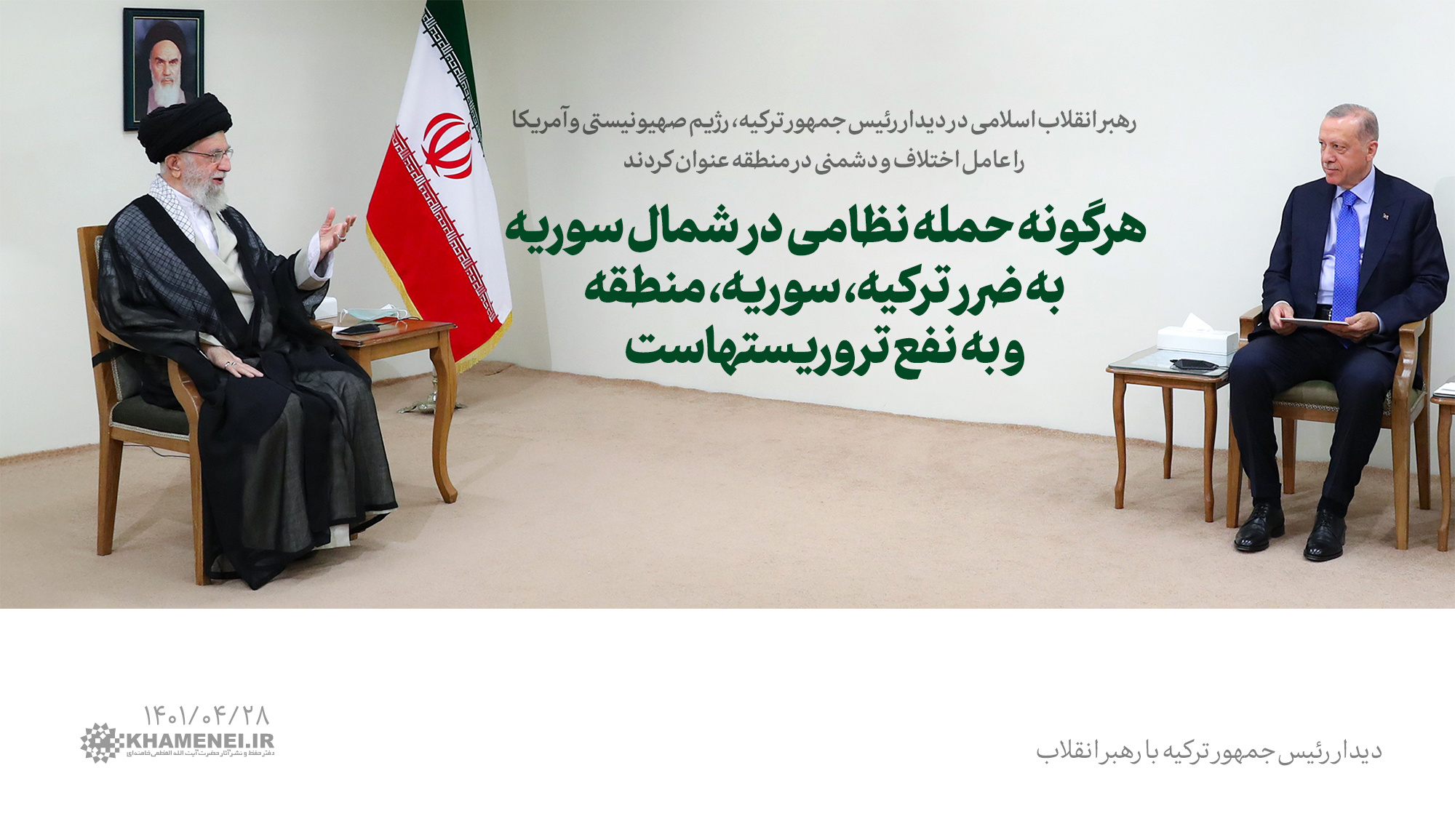 ISWNews Analysis Group: The President of Turkey, Recep Tayyip Erdogan, met and discussed with Imam Khamenei, the Leader of the Islamic Revolution about bilateral and regional issues in Tehran.

The Supreme Leader of the Islamic Revolution, Imam Khamenei met and discussed with Turkish President Recep Tayyip Erdogan and his delegation about bilateral and regional issues.

He further pointed to the developments in the region and listed the Zionist regime as one of the main causes of discord between Islamic countries and emphasized that US and the usurping regime cannot stop the deep movement of the Palestinians and despite the favor of some governments to the Zionist regime, the nations are deeply against this usurping regime.

Imam Khamenei said about the recent developments in northern Syria and the news about Turkey’s military operation: “Maintaining the territorial integrity of Syria is very important, and any military attack in northern Syria will definitely harm Turkey, Syria and the entire region, and benefit terrorists, And the expected political action from the Syrian government will not be realized either. Terrorism must be opposed, but a military attack in Syria will benefit the terrorists, and of course the terrorists are not limited to a specific group.”

In response to the Turkish President’s request for Iran’s cooperation in fighting terrorist groups, the Leader of the Islamic Revolution said: “We will certainly cooperate with you in the fight against terrorism. We consider the security of Turkey and its borders to be our security, and you also consider the security of Syria to be your security. The Syrian issues should be resolved through negotiations, and Iran, Turkey, Syria and Russia should end this issue through dialogue. We have always defended your government in internal issues and against interference, and as you said, we are friends in difficult times and we pray for the Muslim nation of Turkey.”

Imam Khamenei further pointed to the issues of the Caucasus region and said: “We are pleased with the return of Karabakh to Azerbaijan. Of course, if there is a policy to block the border between Iran and Armenia, the Islamic Republic will oppose it, because this border is a communication route that is several thousand years old.

Congratulating on the holidays of Qurban and Ghadir Khom, the President of Turkey considered it necessary to unite the Islamic Ummah and increase the solidarity between Iran and Turkey and said: “Turkey has never been silent in the face of atrocities against Iran, and the brotherhood of Iran and Turkey must be expanded in all fields. We have always been and will be against unilateral sanctions against Iran. In Syria, terrorist groups are supported by heavy weapons from Western countries such as Germany, England, France and especially the US. We expect the Syrian government to start political processes. At the Astana summit, the Syrian issue is on the agenda, and we hope to achieve good results.”

Read more: Imam Khamenei in a meeting with Putin: Americans should leave the region east of the Euphrates in Syria