Erdogan’s invasion north of Aleppo; What will be the reaction of Syria? 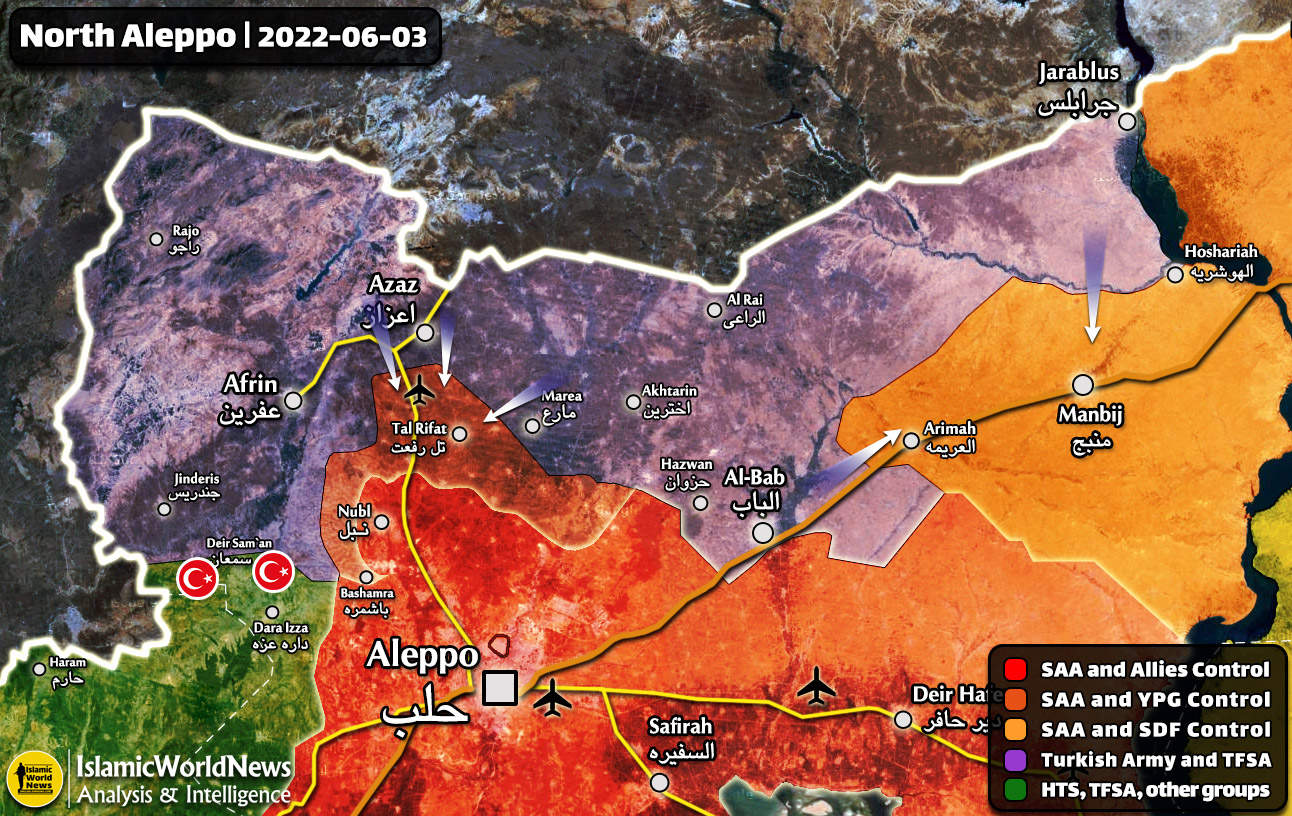 After the Syrian war subsided and a period of unofficial ceasefire between Russia, Iran, the United States and Turkey in the north of the country passed, Erdogan rekindled the fire under the ashes by laying his hands on areas north of Aleppo.

It was in late May that the Yeni Şafak newspaper revealed the intention of the Turkish army to carry out operations in all northern regions of Syria, focusing on Tal Rafaat, Ain al-Arab, Ain Issa and Manbij. But Russian moves and joint Russian-Syrian-SDF military patrols in northeastern Syria reduced the Turkish army’s operations to the towns of Manbij and Tal Rafaat in Aleppo province and canceled operations in northeastern Syria.

As usual, Turkey weighs the aspects of the issue with the viewpoint of Russia and the United States before starting any operation in Syria, and then goes on an adventure. In fact, the US behind-the-scenes satisfaction and Russia’s indifference to the situation in northern Aleppo have drawn all of Turkey’s attention to the reaction of Iran and the Syrian government. The reason for this is also clear! The Russians and the Americans have been so involved in the Ukraine war that issues such as Turkey’s cooperation with Sweden and Finland in NATO membership, Black Sea shipping, and wheat exports, etc. can help them a lot!

Looking at the latest developments in the region and the latest military map in northern Aleppo, several important issues are of interest. These are as follows:

1- What’s Turkey’s military goal in northern Syria?
According to Erdogan, Turkey’s main goals by conducting military operation in northern Syria are to prevent the growth of Kurdish groups based in northern Syria, to keep the PKK away from the territory of the Republic of Turkey and to establish a 30-kilometer-wide security zone in the remaining 458-kilometer-long strip of land between the region of Afrin and the town of Qamishli in the east.
But that’s not all! Erdogan’s main goals by the operation are to revive the nationalist sentiment among voters and boost his declining popularity a year before the presidential election in June 2023; so, it’s to gain points to win the presidential and parliamentary elections. And reducing the risks of the presence of Syrian refugees in Turkey and their transfer to northern Syria is another goal of this operation.

2- Who will confront Turkey?
The military power of the Syrian army alone is not enough to confront Turkey, and they need the Russian army. The view of the main supporter of Syria, namely Russia, is such that he will not enters into wars and conflict unless it jeopardise its interests. On the other hand, the Kurds living in northern Syria have so far not been very supportive of the positions and actions of the Syrian government and its allies. Therefore, in the eyes of the Russians, Kurdish groups are not worth that much for them to be the source of confront with Turkey.
The relations of the Kurds in the north of Aleppo with the United States have weakened after Trump betrayed them during the 2019 conflicts, and also the United States no longer has military bases in the north of Aleppo that can protect Manbij and Tal Rafaat from Turkey.
In the meantime, eyes are on Iran and the resistance groups. So far, no clear position has been taken by Iran and the leaders of the resistance groups on a possible Turkish operation in northern Aleppo, but their response is important.
If Kurdish groups lean towards Iran and the Syrian government, the support of Iran and the Syrian government will surely change Turkey’s agenda. The support of the Iranians will undoubtedly draw the Russians to the region, and Turkey will have to change its plan. It is not clear how this will change, but Turkey with no doubt will avoid a direct military confrontation with Iran. But if the Kurds remain skeptical about their relationship with Iran and the Syrian government, they will certainly be under Erdogan’s boot, and Tal Rafaat and Manbij, and wherever they are based, will face the fate of Afrin, Tal Abyad,etc. It should be noted that according to the field sources of “Islamic World News” from northern Syria, the resistance forces are actively present around Deir Jamal, and yesterday the Russian army deployed a large number of its forces at Minnagh airbase in south of Azaz. These moves reinforce speculation about cooperation between Russia, Iran and the Kurds in northwestern Aleppo province.

3- Axes of possible Turkish operations:
Despite Erdogan’s statements about attacking Tal Rafaat and Manbij, the details of their military operations in northern Syria have not yet been finalized, and Ain al-Arab and Ain Issa are also possible targets for Turkey.
In general, the Turkish army will not have much trouble capturing Kurdish positions north of Aleppo unless Syrian and Iranian forces enter the battlefield. They can attack Tal Rafaat from the south of Azaz and west of Marea and blockade Tal Rafaat by cutting off the road to Aleppo. After this, work will remain on the capture of Minnagh Airbase and about twenty villages, which of course pose a threat by Turkey and its militants against the Shiite towns of Nubl and Al-Zahra.
On the Manbij front, attacks can begin fromt the al-Dadat area north of Manbij and the al-Arimah suburb west of Manbij, and continue along the Euphrates River. Turkey’s advance on this axis will strengthen its position on the northern front of Aleppo and will let Turkey to prepare for another campaign n towards Ain al-Arab.

ISWNews
ISWNews Analysis Group is a completely independent organization maintained by a team of experts and volunteers which focuses on armed conflicts and crises. Our mission is to tell the untold, which is usually censored by the main stream media. Step in battles of the region with us!
Share it:
Aleppo Erdogan Manbij Minnagh Syria Tal Rafaat Turkey