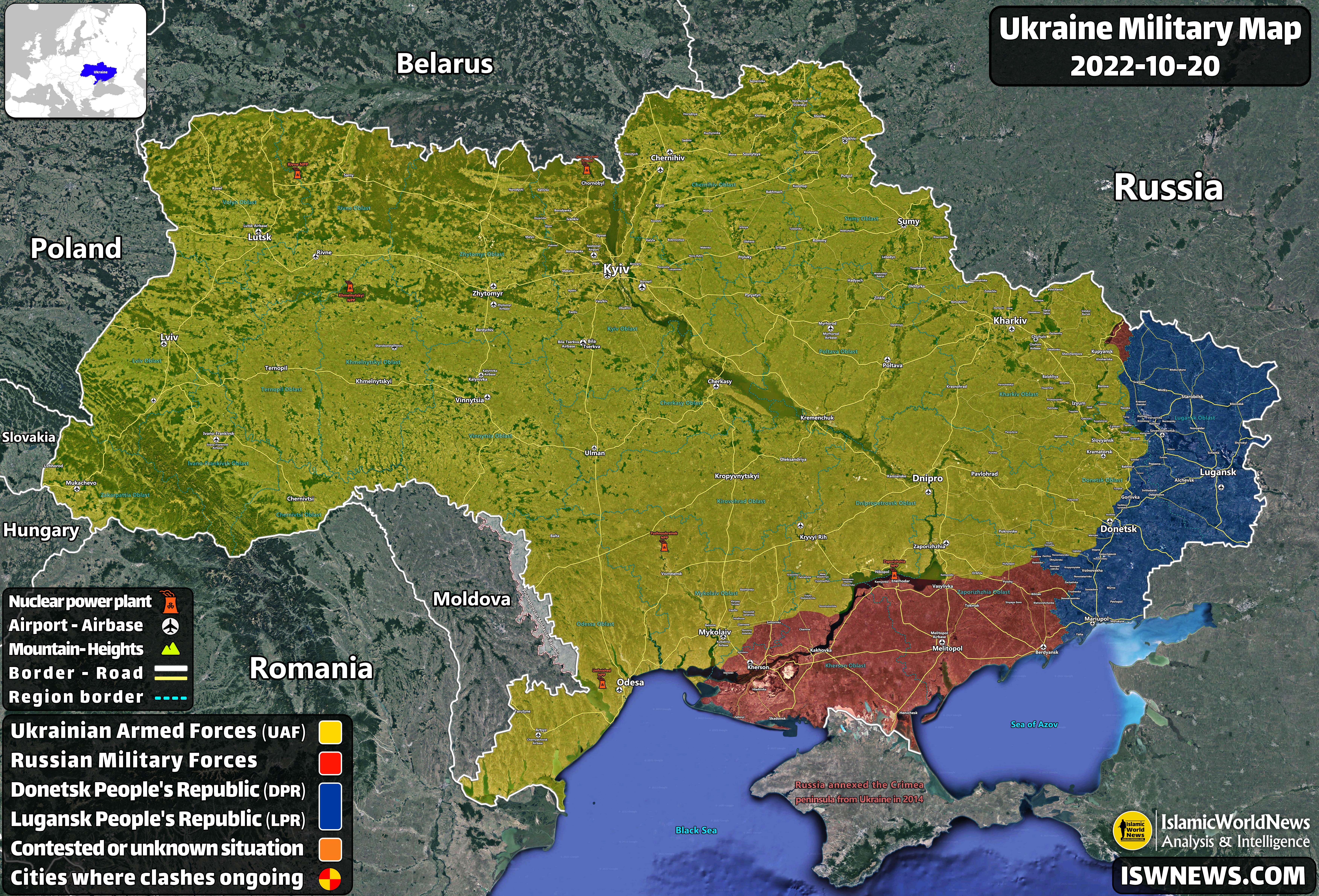 1- Ukraine’s Foreign Minister Dmytro Kolba, announced the proposal to cut off diplomatic relations with Iran. He raised this request with the President of Ukraine. This request was made because of the prominent role of Iranian Shahed-136 drones in the battles of Ukraine.

2- Yuriy Ignat, a spokesman for the Ukrainian Air Force: “Russia is no longer firing its missiles at Ukraine from the Caspian Sea, but from near Rostov. Therefore, the time to prepare for attacks and take shelter is reduced. Russian strategic bombers use Kh-101 and Kh-55 missiles. These missiles fly at a speed of 900 kilometers per hour, and if they are launched from the Caspian Sea, the air force has more time to react and people have more time to enter the shelter. Now the distance is shorter and the time is also shorter.”

3- The Parliament of Estonia officially declared Russia a terrorist state. This parliament also asked the parliaments of other countries to do the same and identify Russia as a sponsor of terrorism. They also demanded Russia’s exclusion from permanent membership in the UN Security Council and asked the European Union to impose more sanctions against Russia and Belarus.

4- The Ministry of Foreign Affairs of Ukraine officially announced the request to purchase air defense systems from Israel. In response to this request, Benny Gantz, the Israeli Minister of Defense, announced that they will not hand over any weapons to Ukraine.
In this regard, Benjamin Netanyahu, the former Prime Minister of Israel, also stated that if Israeli weapons are sent to Ukraine, they may fall into the hands of the Iranians. Whenever we have provided military assistance to one side of the field, in the end, the same weapons have fallen into the hands of the Iranians and they have used them against us.

5- The New York Times published a report claiming that Iranian advisers were sent to Russia. This report states: “Iran has sent advisers from the Islamic Revolutionary Guard Corps to Russia to help solve the problems of drones. These advisers have been stationed in a military base in Crimea to train the Russians.”

6- Hossein Amirabdollahian, Iran’s Foreign Minister: “We have told the Ukrainian authorities to provide a document about the use of Iranian drones in the war in Ukraine if there is any.”

7- Donetsk:
In the Bakhmut axis, the AFU 54th Brigade attacks to recapture the asphalt factory near the city of Bakhmut failed. The conflict in this axis between the parties continues and the Russian army and its allies have increased the attacks on the important city of Bakhmut. Currently, Russian forces have reached the eastern and southern entrances of Bakhmut city, and heavy clashes continue for several days in a row. After Russian retreats from the Kharkiv axis, the main focus of the Russians has been directed to the city of Bakhmut. It seems that the capture of Bakhmut has an important role in determining the future of battles for the Russians in this axis.

8- Kharkiv:
In the southern axis of Kharkiv, sporadic clashes between the Russian and Ukrainian armies continue in the southeast of Kupyansk and northwest of Svatove. In the last two weeks, the Ukrainian forces have made extensive advances in this axis and have pushed the Russian forces back several lines.

9- The Russian army attacked positions of the Ukrainian forces in the city of Mykolaiv, with several “Shahed 136” suicide drones. The video below is about the failure of Ukrainian air defense to counter the Russian drones and the moment it was hit the target.

10- Ukrainian Army and Volodymyr Zelenskyi, the president of Ukraine, claimed that they shot down 223 “Shahed-136” suicide drones in the past 36 days. The first Shahed drone allegedly was shot down on September 13 over the sky of Kupyansk.

11- During the last two weeks, Geran 2 and 1 suicide drones (Shahed-136 and its smaller model known as Shahed-131) have targeted Ukrainian military and economic infrastructures in the cities of Kyiv, Lviv, Zhytomyr, Mykolaiv, Kharkiv, Poltava, Dnipro, Zaporizhzhia, Kremenchuk, Odessa, Rivne, Ternopil, Khmelnitsky, Ivano-Frankivsk. Despite the claim of Ukrainian officials about shooting down these drones, most of the drones hit their targets with high accuracy and the Ukrainian air defenses were unsuccessful in intercepting and destroying the drones. The city of Kyiv has been the host of the most Shahed-136 suicide drone attacks, and Russian attacks using these drones on different regions of Ukraine continues aggressively!

12- On the front of Kherson and Mykolaiv, sporadic clashes between the Russian and Ukrainian armies continue. After the retreat of the Russian army from the eastern areas of the Ingulets River in the north of Kherson province, the clashes continue in the south of Davidyv Brid and Sukhanove area. Yesterday, the Russian army repelled the large-scale attack of the Ukrainian forces in the Sukhanove axis. Currently, most of the conflicts are concentrated in this axis, i.e. in the northwest of Kherson province. The Russian army is strengthening the Kherson front and has sent more troops to this area. Therefore, the Ukrainian forces are trying to break the Russian resistance in this axis and reach Kakhovka as soon as possible and bypass the city of Kherson from the left flank.