Protests Resume in Iraq; But Why?! 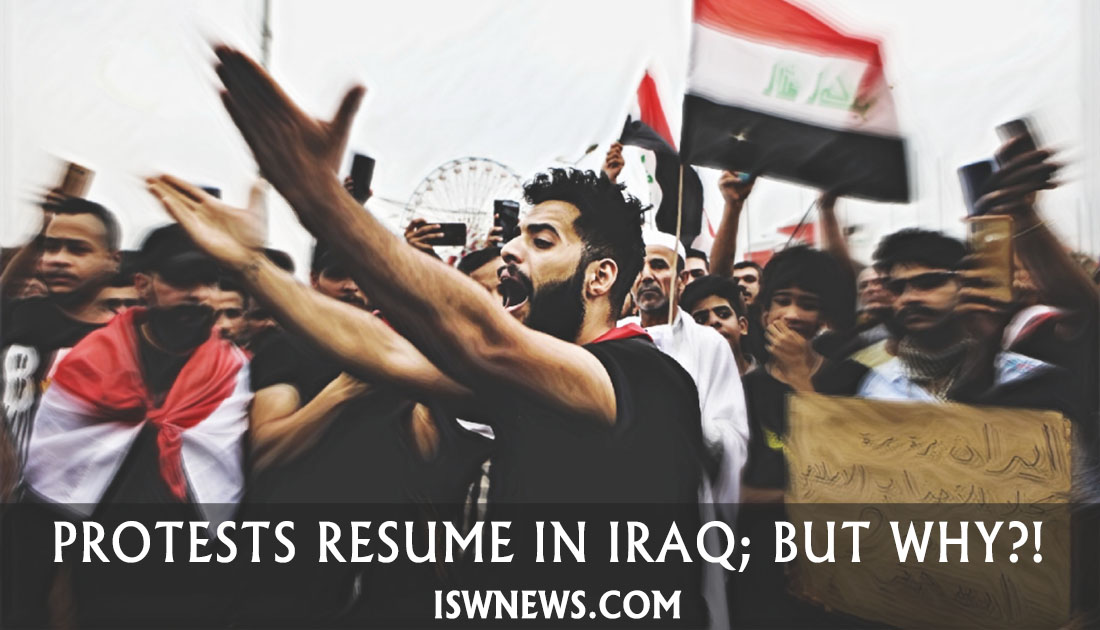 The Iraqi people protests against corruption and the economic situation, has entered the new step after the Corona cold era. Whatever the origin of these protests is, it was surely accompanied with surfing some of Arabic countries like Saudi Arabia and UAE and also the Westerns and in top of them US. that were opponent of Iraqi Shiite government; and they pulled the peaceful (al-Selmiah)approach of these protests to a square for chaos and bloody clashes(al-Damawiah).

Due to the recent protests in the Karbala, Basra, Waset, Babil and some other parts of Iraq, it is possible that the US will challenge the central power by reactivating the protests; and thus, to put pressure on the Iraqi government and military forces. Due to the Iraq cyberspace especially Twitter, the propaganda and planning for restarting the protests in Iraq.
For example, on April 13, Iraqi protesters promised the million demonstration after ending the Corona, by trending the “مليونية_بعد_الحظر“; that we see implementing of this promise these days.

Why we say there are the US footprints in the Iraqi protests?

The Iraqi parliament decision based on withdrawal of the US troops, that was held on January 5, provoked widespread US officials reaction.
Even if we see the decisive decision by Iraqi current government with Mustafa al-Kadhimi prime ministry in expelling the to US troops from Iraq, the US will naturally implement its scenarios in reaction to this decision.
One of these scenarios is the continuation of protests in Iraq, so that the Iraqi central government has been disrupted in the confrontation with protesters or enters into a ransom space; otherwise the protests will lead to a civil war.

For example, among the pro-protest groups, we find NGOs that are mostly registered in the US and have been involved in the form of humanitarian aids to social networking in Iraq; but in recent months have changed their approach and laid the groundwork for the two main streams of unrests that are the weakening of Iraqi resistance forces and confrontation with Iran.

Diverting the protests, from the Iraqi people demands to the American demands, in addition to putting the pressure on the central government in taking a passive approach to the protesters, is also there is the matter of diverting the main demands.
These protests were initially following the Iraqi governmental and administrative reformation and paying attention to people livelihood, but these days are seen the slogans and actions by some protester groups is that are trying accuse the Iran for killing the protesters, or consider the cooperation with Iran, as the cause of governmental corruption in Iraq.

The issue goes even further, and like the last few nights event, in the  protesters attack on the offices of Badr organization, al-Daawa party and Asaib Ahl al-Haq in Kut an Wasit, and burning them is so surprising.

The Hashd al-Shaabi dissolution scenario and discussion about this issue that existence of militant groups in Iraq after ISIS, has no justification, is one of the most important topics of Arabic and western think tanks that try to weak the Hashd al-Shaabi among the people and then diplomatic pressure for its dissolution.

For example, the American base FOREIGN POLICY considers Hashd al-Shaabi wandering on a crossroads, and pretending that the Iraqi people mobilization should decide for its future.
Will it continue its cooperation and communication with Tehran and stand up against the Iraqi people protests, or will choose an independent path, that Iraq decide for them?

So, the protesters enthusiasm that have spent the Corona cold and silent era, and now have came to the streets again to determine their demands fate, are threatened by diverts that not only marginalize their demands, but also  puts them on the playing ground of countries that want the civil war in Iraq and its instability.
So, the scholars, politicians and political and religious fractions should keep their awareness in recognizing these  deviations and maintaining the unity for persuasion of people demands, and without the foreign countries involvement in these matters, maintain the protests in their main path.

Share it:
Hashad Sha'abi Iraq Iraq News Iraq protests US US in Iraq