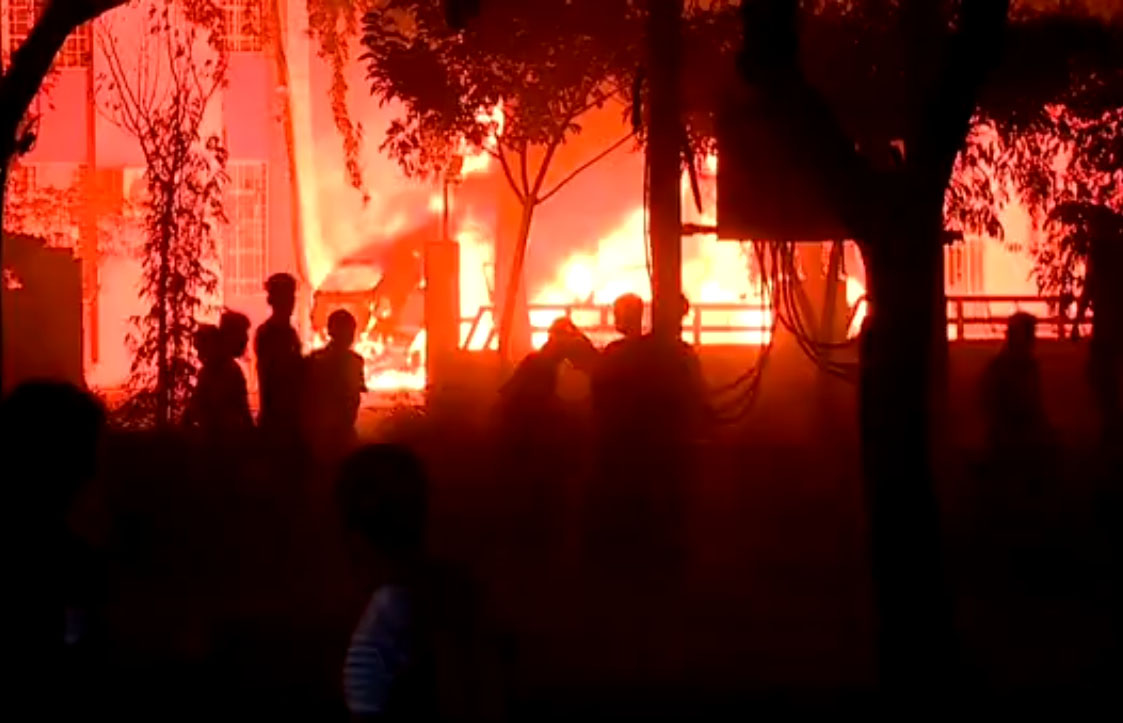 – Demonstrations in areas under the control of the Iraqi Kurdistan region in protest of the poor economic and living conditions.
The region is in a very bad economic situation, so that now, in the eighth month, the local government has not paid the salaries of its employees and armed forces for 5 months this year.
Barzani party officials in Erbil and Dohuk provinces prevented people gatherings by bringing the anti-insurgency forces, while demonstrations took place in PUK-controlled areas.
Reports from Kalar town indicate that the town municipality was set on fire by protesters. The sound of gunfire was also heard in the area. (Image)

– Discovery and seizure of significant quantities of explosives belonging to ISIS in Anbar province by Hashad al-Shaabi (PMU).

– A motorcycle bomb exploded in Al-Habubi Square in Nasiriyah.
According to some sources, three people were injured in the blast.

– Sources close to Barzani’s party reported the arrest of a gang of ISIS in the city of Erbil, the capital of the Iraqi Kurdish region.
Erbil province is under the control of Peshmerga militants affiliated with Barzani’s party.

– A Turkish military vehicle exploded in the Bradost area of ​​Erbil province in northern Iraq.
According to unofficial sources, a number of Turkish soldiers were killed and wounded in the blast. PKK claimed responsibility for the blast.

– The martyrdom of Colonel Hisham Mohammad, Commander of Special Operations of Counter-Terrorism Forces in Salahuddin Province.

– The Turkish Ministry of Defense announced that 5 members of the PKK were killed during the Turkish operation in northern Iraq.

– By order of Iraqi Prime Minister al-Kadhimi, four joint operations center for Iraqi and Peshmerga forces were established in the Khanaqin area of ​​Diyala, the Chiman in Kirkuk, the Makhmour in Ninawa, and the Kasik in western Nineveh.
The purpose of establishing these centers is to coordinate and fill the existing areas between the joint Iraqi forces and the Peshmerga to counter ISIS movements in these areas.

– Some sources: US forces installed the Patriot system in all directions of the Ain al-Assad air base in the western part of Anbar province.

– Iraqi Prime Minister Al-Kadhimi met with the Speaker of the US House of Representatives and had a telephone conversation with the Republican leader in the US Senate.

– Al-Kadhimi: US troops will leave Iraq in three years.
Qais al-Khazali, secretary general of Asaeb Ahl al-Haq, in response to al-Kadhimi: It is illegal for US troops to remain in Iraq for another three years.

– News sources: Attack on the military convoy of American terrorists in Ghazaliyah, west of Baghdad.