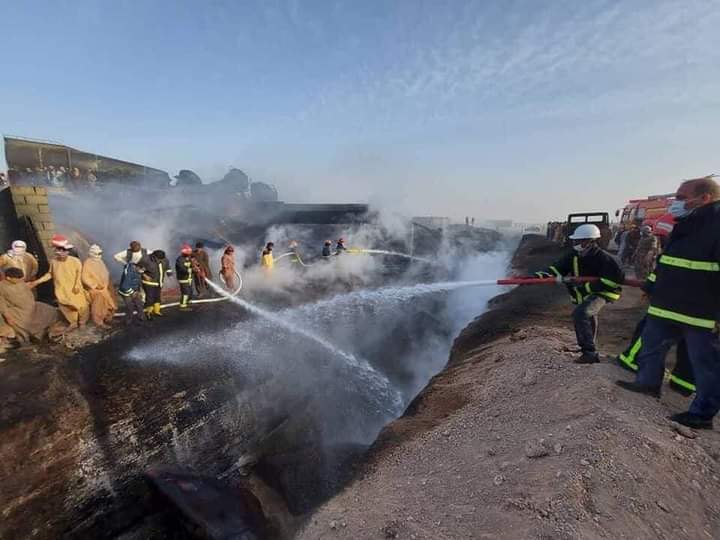 ISWNews Analysis Group: The massive fire at the Abu Nasr Farahi border crossing was contained with the help of Iranian firefighters.

1- Farah:
The massive fire at the Abu Nasr Farahi border crossing was contained with the help of Iranian firefighters. 3 storages and 2 fuel tanks were destroyed by fire in the area.

2- Peace talks:
Zalmay Khalilzad met with Mullah Baradar and the government’s negotiating team. During these meetings, the issue of forming an interim government in Afghanistan was discussed.

3- Kandahar:
– Taliban spokesman Zabihullah Mujahid announced release of 53 government prisoners in Kandahar province on the orders of the group’s leader.
– According to the Afghan Ministry of Defense, 62 Taliban members were killed and 52 were wounded during the recent clashes between the army and the Taliban in the districts of Arghandab, Panjwai, Zharey and Shah Wali Kot. Also during these clashes, 76 mines and explosive traps were discovered and neutralized.
– Army airstrikes on Taliban positions in Mianshin district.

4- Helmand:
A terrorist blast on the outskirts of Lashkar Gah Police Command killed the head of the National Security Prosecutor’s Office, Seyed Mahmoud Sadat, and injured eight others.

5- Balkh:
– An Israeli- made drone, Heron 3 belonging to German Army crashed in the east of Balkh province.
– Taliban attacked Army positions in Nahrshahi district. 10 members of the security forces were killed and 4 others were wounded.

6- Kunar:
One person was killed and 18 others were injured in a terrorist attack in Asa’adabad.