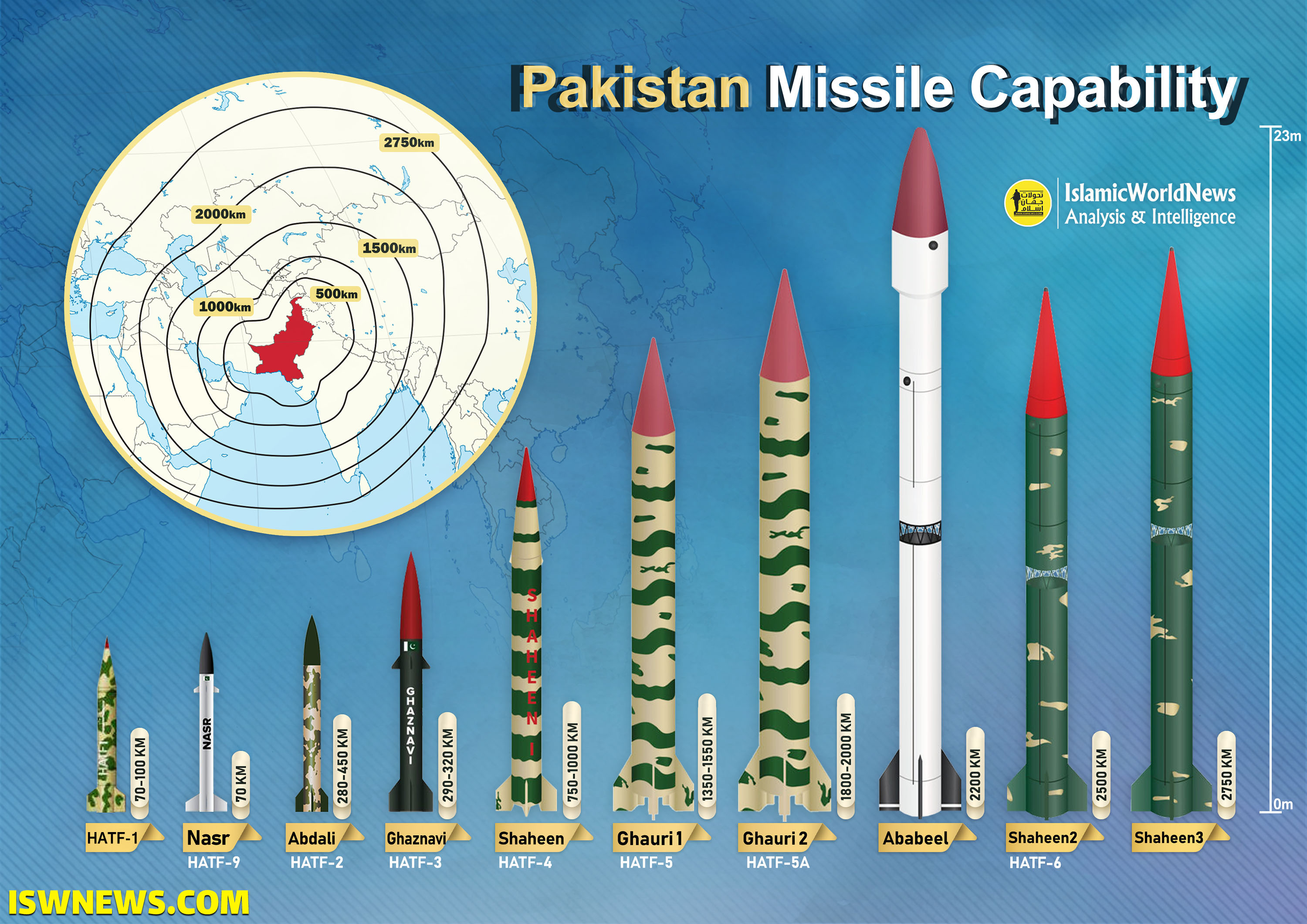 Pakistan is constantly upgrading its missile arsenal and this is considered to be Pakistan’s main defense strategy against its traditional rival, India.

Pakistan’s missile arsenal consists mainly of short-range and medium-range ballistic missiles, and important steps have been taken in the production of cruise missiles. Pakistan has received significant technical assistance from China in its nuclear and missile programs, and in addition to China, it has also benefited from military cooperation with Iran and North Korea.

The culmination of Pakistan’s missile program is reflected in the Shaheen 3 (Shaheen-III) missile project, which was successfully tested in the waters of the Arabian Sea on January 20, 2021, after modifying its technical design and carrying capacity.

Pakistan also has two prominent examples of cruise missiles, classified as “Babur” and “Ra’ad”. Babur is fired from land and sea at the target, and the Ra’ad can be fired from the warplane.

Pakistan has been building ballistic missiles since the 1980s under the Hatf project, which has continued unabated to this day with the support of the Pakistan government and military, and has achieved many goals for Pakistan.

1- Hatf-1 missile:
Hatf-1 short-range ballistic missile, which is made in four types. The missile weight is 1,500 kilograms, 6 meters long and 0.56 meters in diameter, the warhead weight is 500 kilograms and has a range of 70 to 100 kilometers.

3- Ghaznavi missile:
Hatf-3 or Ghaznavi short-range ballistic missile (named after the Ghaznavid dynasty), the missile weight is 5,256 kg, 9.64 m long and 0.88 m in diameter, with warhead weight of 700 kg and with a range of 290 to 320 km, capable of carrying nuclear warhead.

5- Nasr missile:
Hatf-9 or Nasr short-range ballistic missile is a missile with a weight of 1,200 kg, with warhead weight of 400 kg, with range of 70 km and accuracy of 1 meter.

6- Ababeel missile:
The Ababil medium-range ballistic missile is a missile with a length of 21.5 meters and a diameter of 1.7 meters, with warhead weight of 500 kg, and range of 2200 km, which is also capable of carrying nuclear warhead.

9- Ghauri 3 missile:
The Hatf-8 medium-range ballistic missile, or Ghauri 3, was a 3,000 km missile which did not reach the production stage and its design was stopped. After the halt of Ghauri 3 project, Pakistan claimed to have built another ballistic missile called Tipu missile with a range of 4000 km, about which no information has been released yet.

10- Shaheen 2 missile:
The Hatf-6 or Shaheen 2 medium-range ballistic missile is a missile with a weight of 25,000 kg, 17.5 meters in length and 1.4 meters in diameter, with a range of 2500 km, which is also capable of carrying nuclear warhead.

11- Shaheen 3 missile:
The Shaheen 3 medium-range ballistic missile is a missile with a length of 19.3 meters and a diameter of 1.4 meters, with a range of 2750 kilometers.
The missile is capable of targeting all of India, including its islands, from positions south of Islamabad, as well as targeting Israeli if deployed in Balochistan province.