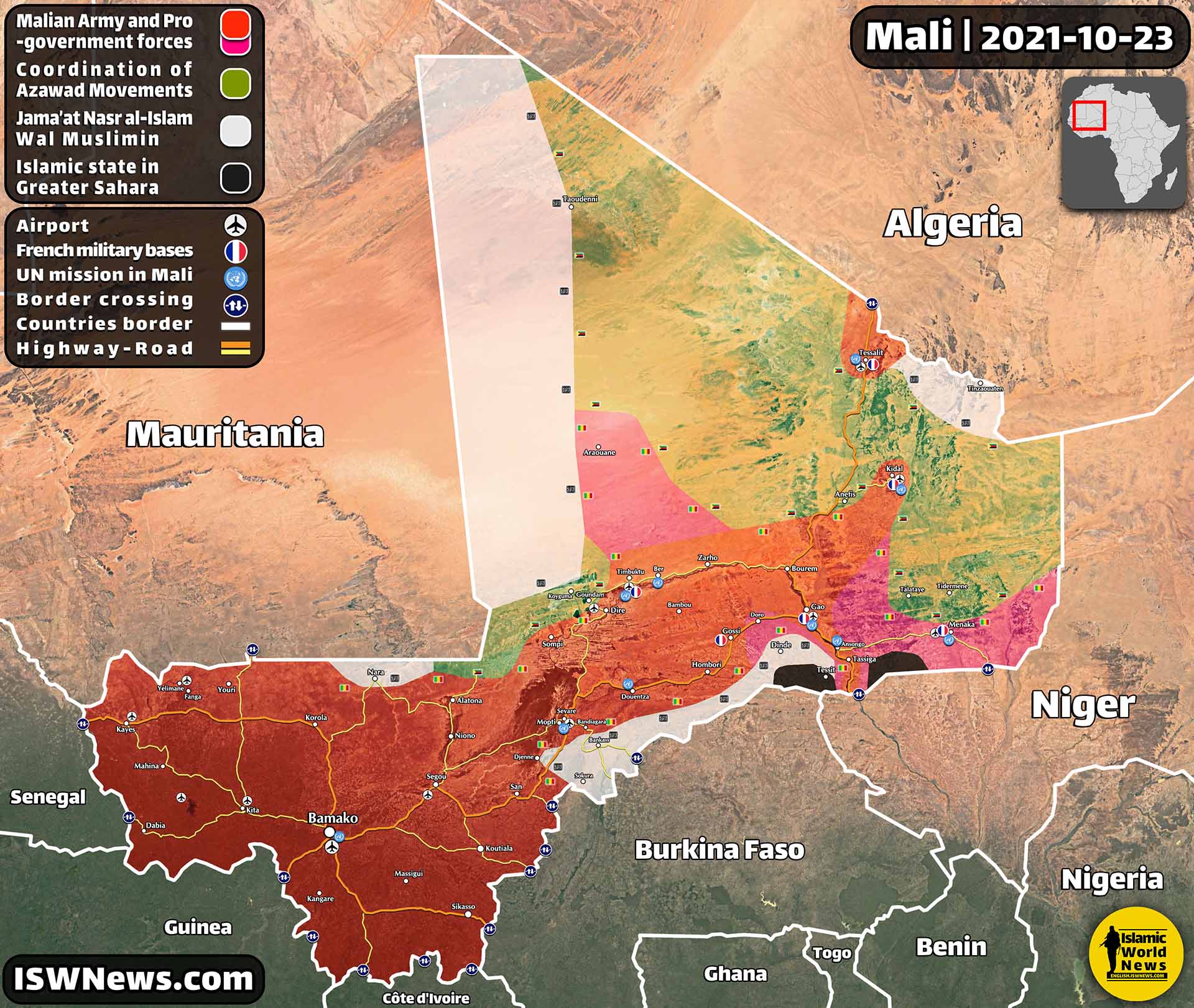 Investigation of groups involved in the Mali war, from the Mali government to the Azawad movement and supporters of al-Qaeda and ISIS

Mali is a landlocked country in West Africa bordering with Algeria, Niger, Burkina Faso, Côte d’Ivoire, Guinea, Senegal and Mauritania. The country has an area of ​​1240192 square kilometers and a population of about 20 million people who have different ethnicities and languages. About 90% of the Mali population is Sunni. The official language of Mali is French, the legacy of years of colonization by Europe and France; However, only 5 to 10 percent of Mali people are fluent in French, and the local dialect of Mali is Bambara, and about 80% of Mali people speak it as their first or second language.

The northern Mali deserts have vast resources of oil and gas that have not yet been exploited. Mali also has huge resources of gold, uranium, etc. However, despite having such vast and valuable mineral and fossil resources, Mali is at the lowest possible level of development and more than half of its population lives below the poverty line. Overall, Mali is one of the poorest countries in Africa and the world.

Mali has a civilization and history of two thousand years ago and has been under the rule of the Sudanese Empire and Morocco for several periods. The region was occupied by France before the outbreak of World War I and finally gained independence on September 22, 1960.
After gaining independence under Modibo Keïta and eight years of socialist rule, Mali became the scene of a military coup by General Moussa Traoré, which ruled until 1991. With the beginning of the popular protests, Traore was removed from the throne and various parties took control of the Mali government through elections until 2012. In 2012, another military coup led to the dissolution of the government and armed groups took control of various areas in Mali.
The Azawad separatist movement in the north and al-Qaeda militants in other parts of Mali were able to seize parts of the country, and the French-backed government retained the capital and recaptured the lost cities and towns in a short time. In recent years, there have been several rounds of talks between the government and the opposition groups, which have not yet reached a conclusion. Conflicts are also raging across Mali, and the people of Mali are still waiting for the government’s promise to end the conflict, the withdrawal of foreign troops and the holding of a solid national election.

Classification of parties involved in the Mali war:

Mali government and foreign allies:
Following the military coup in 2012 against the Malian president, Amadou Toumani Touré, the Azawad movement, in collaboration with Ansar Dine and other armed groups, occupied three northern Mali provinces. After occupying northern Mali, they announced the formation of an independent Azawad government.
The leaders of the Azawad movement eventually clashed with the Ansar Dine group because of disagreement on how to govern the country and after months of fighting lost the war to Ansar Dine militants, which had the support of other extremist groups in the region, such as Al-Qaeda in the Islamic Maghreb (AQIM), Movement for Unity and Jihad in West Africa (MUJWA), etc.
The Ansar Dine group enforced strict and fanatical laws in the areas under their control, which were opposed by the people and provoked popular protests. In 2013, the French army saw the situation ready to return to Mali, hence, under the pretext of countering terrorism, intervened militarily in Mali war with several African countries under the name of Operation Barkhane. With foreign intervention in Mali, government forces recaptured northern towns, and opposition groups from Azawad to other extremist groups lost their positions.

Operation Barkhane is the French military operation with cooperation of the G5 (Mauritania, Mali, Niger, Burkina Faso and Chad) countries in Africa’s Sahel region against the Islamist groups that started on August 1, 2014. The Sahel is the ecoclimatic and biogeographic realm in ​​central Africa that stretches from west to east between the Atlantic Ocean and the Red Sea.

The French army has set up military bases in Chad, Niger and Mali, including six bases of Gao, Tessalit, Kidal, Menaka, Gossi and Timbuktu in Mali. Other bases are located in areas such as Abecheh, Faya, N’Djamena in Chad, Niamey, Madama, Aguelal in Niger. The Operation Barkhane is permanently headquartered in N’Djamena, the capital of Chad.

In recent years, several ceasefire and peace agreements have been signed but the conflict has resumed under various pretexts. Among the reasons for the continuation of these disputes are the refusal of the Mali government to grant autonomy to the North, the non-compromise of jihadist groups with the government, the pressure of foreign countries, especially France.
The French involvement in the Mali war created a good excuse for the extremists. Because the northern opposition used the France colonization behavior as a pretext, therefore the jihad against the Crusaders again became the basis for the recruitment of Salafi groups.

On the other hand, the Mali government has faced political decline and has faced two coups in its capital in the last year. Of course, French pressure on the Mali government not to negotiate with the opposition and to exert influence on Mali through countries in the region has been effective in Mali’s political deadlock; to the point that in recent months relations between Mali and French government officials over political pressure and ceasefire violations become more strained than ever.

The dispute has escalated in recent weeks after the French government announced a decision to reduce its troop numbers in the Mali and Sahel region. France currently has about 5,000 troops in the region under Operation Barkhane and also 15,000 UN peacekeepers in Mali as part of the United Nations Multidimensional Integrated Stabilization Mission (MINUSMA). France is said to have decided to reduce the number of its troops to 2,500 by 2023.
On the other hand, the Mali government has also come up with a solution, and there have been widespread rumors in the media recently about the Mali government willingness to hire Russian Private Military Contractors to replace French troops. Russia has welcomed the request and donated four Mil-17 helicopters to the Mali army in June 2021. These actions have provoked France serious protests and warnings to Mali. An issue that the French did not like and that upset them deeply!

Azawad Movement:
Azawad is the name of a political and military movement in northern Mali whose members are Tuaregs. They attribute their civilization to the Gao Empire in northern Mali, which was formed in the ninth century AD and joined the Mali Empire in the fourteenth century.
Azawad declared its existence after the military coup in 2011 with the aim of dividing northern Mali. The group had between 9,000 to 10,000 armed forces and it is said that some of the Tuareg members of the Libyan army during Gaddafi and the Tuareg insurgents in 2007 in northern Niger have been members of the movement. The movement weakened after the defeat by Ansar Dine and the group’s allied militias, and its remnants joined the Coordination of Azawad Movements (CMA) in 2014.
The Coordination of Azawad Movements is a coalition of Tuareg independence and Arab nationalist groups which formed in Mali, most of whose militants and supporters are currently present in the three northern provinces of Gao, Kidal and Timbuktu.
This coalition (cooperation) includes the following groups:
1- The National Movement for the Liberation of Azawad (MNLA)
2- The High Council for Unity of Azawad (HCUA)
3- The Arab Movement of Azawad (MAA)
4- The Coordination of Patriotic Resistance Movements and Forces (CMFPR)
5- The Coalition for the People of Azawad (CPA)

Jama’at Nasr al-Islam wal Muslimin:
The Jama’at Nasr al-Islam wal Muslimin (JNIM) is an extremist organisation that was formed in 2017 with the merger of Ansar Dine, the Macina Liberation Front, Al-Mourabitoun and the Saharan branch of Al-Qaeda in the Islamic Maghreb. This group can be considered the official branch of the al-Qaeda terrorist group in Mali, because in 2017, they pledged allegiance to al-Qaeda leader Ayman al-Zawahiri. The group also considers itself an ally of Abu Musab Abdel Wadoud, (former) Emir of Al-Qaeda in the Islamic Maghreb and Taliban leader Hibatullah Akhundzada in Afghanistan.
The Jama’at Nasr al-Islam wal Muslimin militia has repeatedly attacked positions of the Mali army and foreign forces in recent years. The leadership of JNIM is in the hands of Iyad Ag Ghaly, the former leader of Ansar Dine group. He is one of the most prominent leaders of the Tuareg insurgency between 1990 and 1995, with a long history of guerrilla warfare.

ISIS:
ISIS was formed in Mali with the separation of some commanders of the Al-Mourabitoun group in 2015 under the name of “Islamic State in the Greater Sahara”, which in addition to Mali, also operates in Niger and Burkina Faso. In the following years, ISIS recruited a large number of militants from Gao.