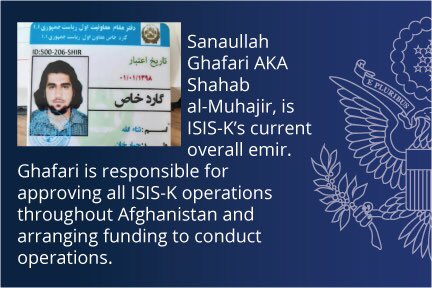 Prior to this action, US Department of State on November 23, in addition to Sanaullah Ghafari, put ISIS spokesman for Afghanistan Sultan Aziz Adham, Esmatullah Khalouzi a financial supporter and Mawlawi Rajab head of Kabul faction on its sanctions list.

The US Department of State claims that Sanaullah Ghafari and ISIS members are stationed in north of Kabul and they also plan and carry out all terrorist operations in Kabul from this area. US also claims that Sanaullah Ghafari was among bodyguards of Abdul Rashid Dostum, leader of National Islamic Movement of Afghanistan, or Amrullah Saleh, former vice president. But the claim was rejected by National Islamic Movement party.

Amrullah Saleh believes Sanaullah Ghafari is from Shekar Dare district of Kabul and claims he was part of Haqqani Network until 2015. He said Shahab al-Muhajir is a 31 years old engineer and graduated from Kabul Polytechnic University.

Khorasan fraction is part of ISIS terrorist group started its activities from 2015 in Afghanistan. The domain of activities covers middle Asia countries such as Afghanistan, Pakistan and Kashmir.