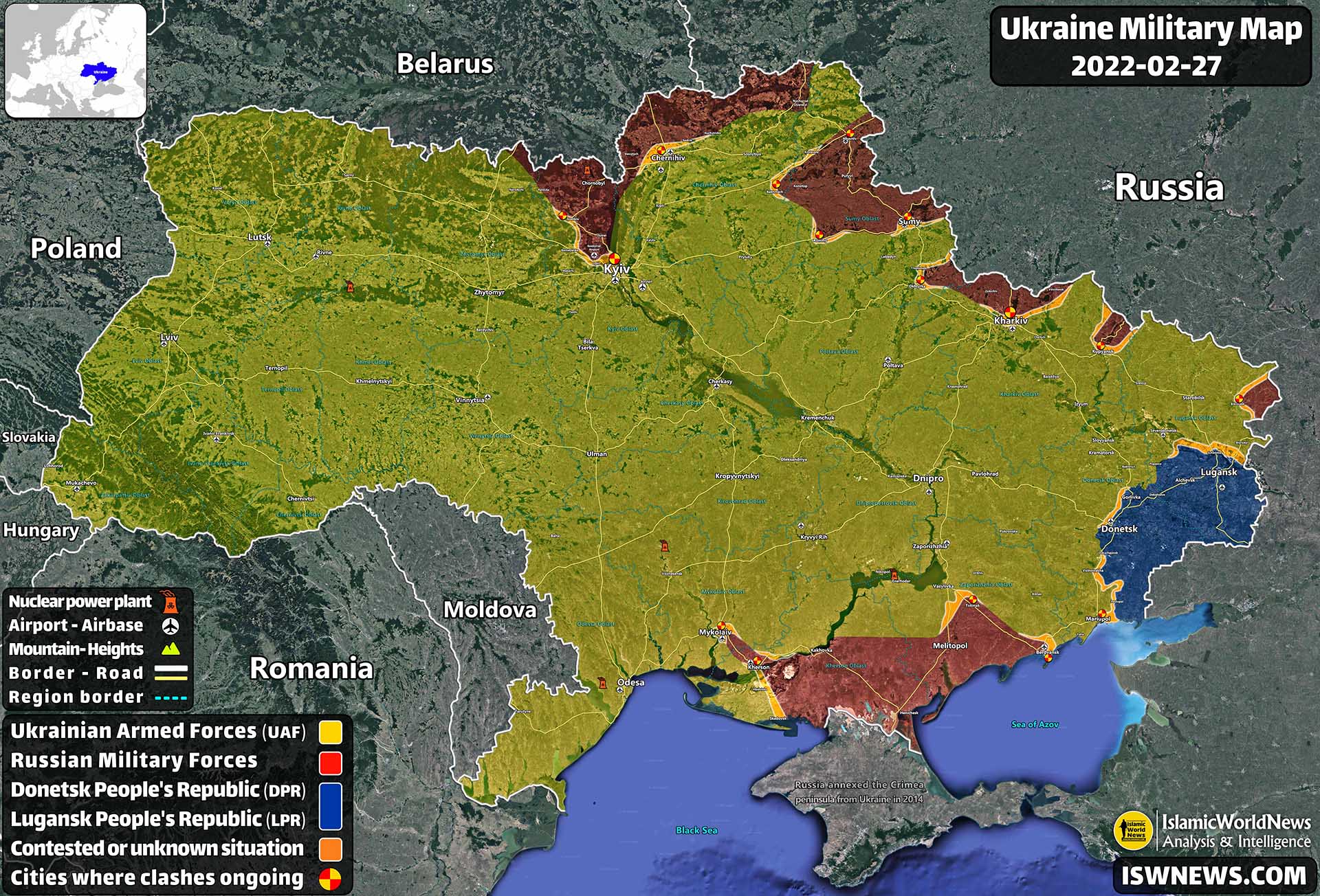 Review of the latest military changes in the north, east and south of Ukraine fronts until February 27.

In the last four days and following heavy missile and air strikes against Ukraine’s military and strategic infrastructure, the Russian military operation in Ukraine has entered into a ground advances. Currently, the clashes are taking place in the three axes of east, north and south of the country. Details of the progress and changes in the lines of conflict are as follows:

Northern front:
In general, after four days of heavy fighting on the outskirts of Kiev and its environs, the situation in the regions has reached a relative stability. In the Chernihiv region (Oblast), Ukrainian troops repelled Russian attacks on the city of Chernihiv, and Russian forces are now stationed in northern areas of Chernihiv city.

On the Kiev front, the Russian troops still control Gostomel (Antonov) Airport west of Kiev. The airport is considered the main base for Russian forces to attack the city of Kiev.
On February 27, the southern areas of Gostomel Airport, including Bucha and Irpin, witnessed one of the heaviest battles in the past four days between Russian and Ukrainian forces. Russian forces trying to block the western entrances to the city of Kiev by advancing in this area.

There is no clear information about the situation of the forces on both sides inside the city of Kiev. In recent days, contradictory videos have been released of Russian troops inside Kiev and their battle with Ukrainian forces. Summarizing the available information, it can be concluded that there is still chaos in Kiev and the situation of the forces involved has not been fully stabilized. However, it should be noted that most of the clashes were reported in the northwestern and western parts of Kiev, and the presence of Russian forces in this part of the city is confirmed. On the other hand, the Russian Ministry of Defense has issued a statement announcing the control of the western axis of Kiev by Russian forces.

Eastern front:
After several days of fighting on the outskirts of Kharkiv, the clashes have reached to streets of Kharkiv city since this morning, and Russian troops have been able to advance into the city’s neighborhoods. Clashes between Russian and Ukrainian forces continue fiercely in the city of Kharkiv.

On the Donetsk front, the DPR advanced on the Volnovakha axis to a depth of 25 km. Over the past two days, the DPR forces have captured the areas of Oktyabrskaya, Trudovskoye, Vsilevka, Andriivka, Prokhorovka, Rybinsk, Chicherino, Pavlopol, Pishchevik, Nizhne, Granitne, and Gnutovo. Clashes between the two sides are currently ongoing in the suburbs of Mariupol.
On the Luhansk front, according to sources affiliated with the Luhansk Republican Forces , the LPR forces advanced to a depth of 52 km and captured the towns of Schastie, Muratovo, Stanitsa Luhanskaya, Muratovo and other villages in north of Luhansk.

Southern front:
In the past four days, Russian troops have begun advancing from the Crimean peninsula to Kherson region. Hence, during the advance of the Russian army, the town of Henichesk and other southern villages of Kherson region came under Russian control. Subsequently, as Russian forces advanced into the northern part of Kherson province, they also advanced east and west of the province and entered the provinces of Zaporizhzhia and Mykolaiv.

In Kherson region, the important cities of Kakhofka and Nova Kakhovka on the banks of the Dnieper River came under Russian control. The Russian army continued its advance in the western part of Kherson region and entered the city of Kherson by crossing the Dnieper River. Kherson Airport and much of the city are now under Russian control. But sporadic clashes are still reported in the city.

After Kherson, Russian troops entered Mykolaiv region, and now the fighting has reached to the south and west of Mykolaiv. The city of Mykolaiv is under the control of the Ukrainian army and Russian airstrikes have begun on the city.

Another important news on the southern front is the capture of a number of Ukrainian forces on the Snakes island in the Black Sea. There is contradictory news about this story. The Ukrainian side claims that 13 Ukrainian soldiers were stationed on the small island, all of whom were killed by Russia navy after they refused to surrender. The Russian side also rejects the claim and stated that about 80 Ukrainian troops have surrendered to Russia after faced a warning by the Russian navy. Russia has released a video of food and water being distributed among the captives Ukrainian soldiers.

Read more:
Latest military situation in Eastern Ukraine, 26 February 2022 (Map Update)
What is happening in Ukraine? What is the story of the Russian military invasion of Ukraine?