Opinion: The Battle of Technological Structures 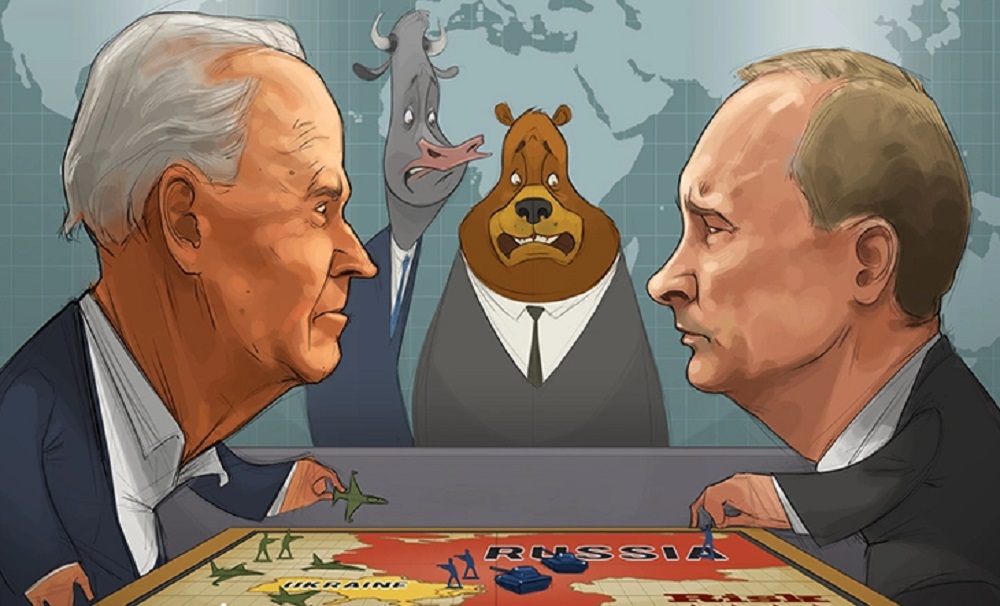 The war in Ukraine caused not just a crisis in international relations, it is a turning point for the whole history and those who claim that we are in the initial stage of the Third World War are right. The complexity of the situation lies in understanding the true sides of the conflict, since most experts in international law are supporters of the thesis of a conflict of interests between different alliances, and they are certainly right in this, but only when it comes to the confrontation of the West against China or the Islamic World.

The situation with the Russian Federation is complicated by the fact that after 1991 the Kremlin is no longer an independent factor and voluntarily signed up as a member of the collective West. From that, many have problems in understanding what is happening in Ukraine.

I will try to outline my point of view on the war in Eastern Europe. What is happening is certainly a “world war”, but this is not a battle of military-political blocs by analogy with the two previous world wars, now we are witnessing a clash between corporations located in the shadow of national sovereignty.

The simplest explanation for the term “technological way” is this – it is “a set of related industries that have a single technical level and are developing synchronously.”

The history of the term originates from the Soviet scientist Nikolai Kondratiev (1892-1938). In his works, the famous economist pointed to “periodic cycles of alternating ups and downs of the modern world economy lasting 45-60 years.” Based on Kondratiev’s cycles, Technoprom-2013 identified six technological orders.

So, according to the cycle table, the current Russian Federation is the main core of the fourth technological order, as evidenced by the creation of Gazprom, Lukoil and Rosneft. While the United States is in full swing moving from the fifth to the sixth scientific and technological revolution.

Biden is a “political symbol of green energy,“ which means that Americans are beginning to actively lobby for the transition from oil and gas directly through nuclear power in favor of nano and biotechnology. The turbulence of economic cycles always entails a series of wars that threaten to escalate into several global conflicts with the use of weapons of mass destruction.

The struggle between technological orders under the cover of corporations explains any complexity of the plot of the theater of military operations and political confrontation. For example, the Americans are lifting sanctions against several Venezuelan oil companies, this happened as part of the “substitution of Russian oil” and “squeezing the Russian Federation out of the world market,” but the facts suggest that the same Venezuelan companies are associated with Rosneft. That is, we see that there are interested parties inside the United States, for whom it is extremely important to continue cooperation with the Russian Federation in terms of oil and gas.

Moreover, the continued dependence of American society on oil and gas is a kind of subversive work of the global oil and gas lobby, the purpose of such work is to block any innovations in the field of energy resources and stake out a leading position for oil and gas for another 60 years. The same reason concerns the history of arms supplies from EU countries to the Russian Federation. The Americans groundlessly accused China of supporting the Kremlin’s “special operation,” but they themselves supplied chips for the tanks of the Russian army.

What’s the matter? Why does the West, accusing Russia of aggression, supply weapons to the Kremlin itself? The answer is simple – information about the supply of advanced weapons and spare parts for military equipment from the West to the Russian Federation is a carefully planned operation of the global oil and gas lobby. Thus, the main component of the fourth technological order is trying to fight for a place in the sun against the background of the beginning of the era of nuclear energy and the total dictatorship of nano-technologies.

The current events in Ukraine were preceded by a “guerrilla war” between corporations representing their own economic cycle. For example, the explosion of the Fukushima nuclear power plant became an “iron argument” for the then German Chancellor Angela Merkel to abandon nuclear energy for a long time. The anti—nuclear sentiment was preceded by a sabotage at the Soviet nuclear power plant in Chernobyl, after which European politicians paid for by the oil and gas lobby began to claim that supposedly “nuclear energy is a “transitional” technology, not the future, and no new commercial nuclear power plants were built after 1989.”

Now we can say that oil and gas corporations have “unleashed” a war in Europe, but to be more precise, there was a “strike ahead”, this is what Putin said at the Valdai Forum in 2015. Ukraine is important for Gazprom from the point of view of regular oil and gas supplies to the EU, it has been so since the first days of Putin’s rule, and when the first Maidan took place in Kiev, it became clear to the EU that the region would soon burn (we must not forget about the hot spots in Moldova and the Balkans). After that, it was decided to preserve the corridor with Moscow by any means to continue the functioning of the oil and gas corporations of “Russia”, which in fact do not belong to it.

This explains why the Americans (those who consider themselves Republicans) easily got rid of Yukos Khodorkovsky in favor of the “Putin’ corporation. Influential people from Berlin and Paris played their role. Therefore, behind the screen of “Putin’s patriotism” lies the striking force of the fourth technological order, the whole point of which is to protect the interests of Gazprom and its comrades (other holdings) in the post-Soviet space.

If you analyze the entire board of directors of Gazprom, you will find about sixteen Western politicians of various ranks and status, Schroeder, Berlusconi and the late Chirac stand apart. I will also add here that Lukoil immediately after its official creation carried out its first delivery to Canada (the beginning of the 90s). The infamous American oil company Halliburton has been producing oil in Russia since 1991 and did not stop production even after the Crimean events in 2014.

As for the “Eurocentricity” of Putin himself, then it should be recalled about the meeting with Macron in 2019, where at first the French president said – “I have said this many times… Russia is a European (country). And we deeply believe in this Europe, which stretches from Lisbon to Vladivostok.” Putin then replied: “Even General Charles de Gaulle “expressed this idea in essence when he spoke about Europe from Lisbon to the Urals.” He added that Russia “stretches to the Pacific Ocean,” and all this space is the space of European culture, which is important to understand.” It is hard to believe in the words of the head of the Kremlin, especially against the background of the current “anti-Western rhetoric”, but the idea of a “Greater Europe”[1] fully corresponds to the plan of the oil and gas lobby to create a huge military enclave with nuclear weapons and capable of staying afloat for about sixty more years.

By the way, Putin has been talking about this every ten years. First, in 2010, the head of the Kremlin said that ”Unfortunately or fortunately, neither solar energy, nor firewood, nor dried manure will replace hydrocarbons for the next 15-20 years.” Then, in early February 2022, the President of the Russian Federation extended the period of dominance of oil and gas, indicating that “it is premature to abandon hydrocarbons. They will be actively used for maybe another 50 years.” As we can see, the “Tsar of the Russian Federation” defends the interests of the oil and gas lobby by faith and truth, even at the cost of using nuclear weapons.

Since the time of the first technologies in the history of mankind, we have been witnessing the war of these very economic cycles with each other, where the most modern and creative always wins, the one who meets the needs of people, victory is expected for him, but always at the cost of huge human losses, the breakdown of political systems and global stress in the economy, which lasts for decades.

1- By the way, the Nazis were one of the first in recent history to promote a plan to create a “Europe from Dublin to Vladivostok.”