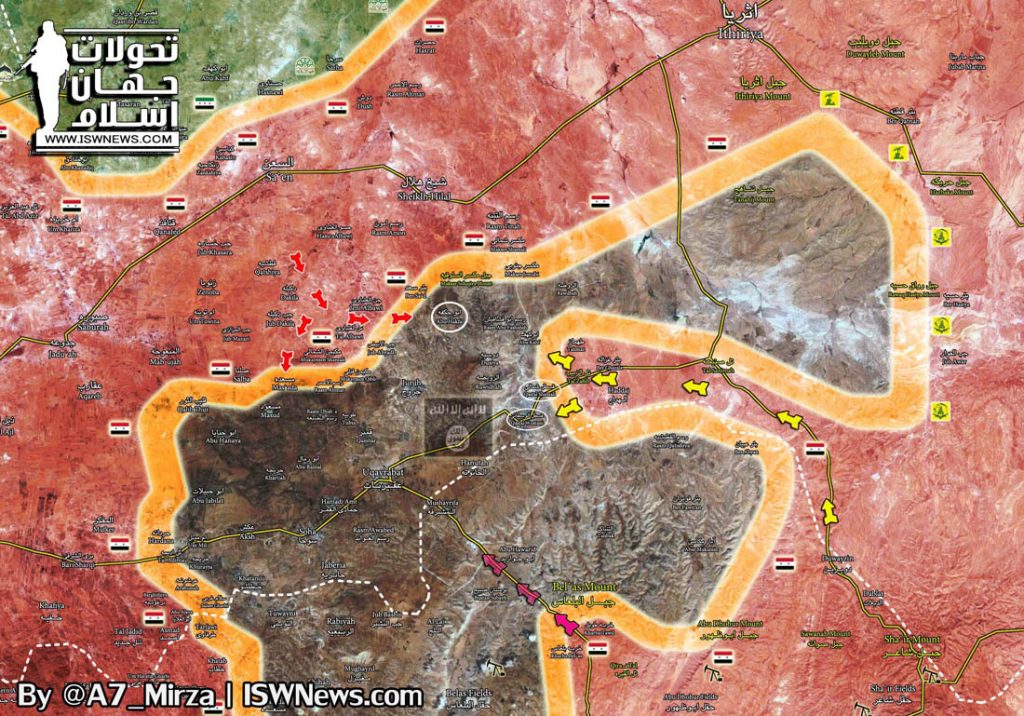 According to the news and analytics outlet of Islamic World News last week with the advances of the Syrian army in eastern Hama, the ISIL siege rings in the Uqayrabat region became tighter.

The Uqayribat is the last ISIL castle in the east of Hama and the closest current point to the crowded western Syria . After completing the ISIL siege in the east of Hama and the Uqayribat region, we will see the liberation of the whole area sooner or later, and ISIL’s access to Syria’s west and important cities such as Hama and Homs will be practically ended. Although it seems unlikely, but considering the nature of the Tahrir alsham and some inter-group affiliations with ISIS, the probability of any option is conceivable.

It should be mentioned that in the past week, after completing the blockade in eastern Hama, ISIL and Tahrir al-Sham at the same time attacked on al-Sa’n and Sheikh Helal, from both sides of the south and north showed signs of their hidden cooperation.

Of course, the hidden cooperation between these two groups and the attacks on this route along the Hama-Aleppo road are not unprecedented and we have seen it in the past and will probably repeat.

on the middle axes

The Syrian army and the National defense are progressing slowly in the south of Al-Sa’en, and over the past two weeks, with the liberation of villages and areas such as Hasso-Jinni-Tel- alAbavi, dominated the heights of Abu Hakfa. Also by liberation of Northern/Southern Dakila and the Salba safety of al-Mub`ujah remarkably achieved.

On the other hand, the Syrian Resistance and the Syrian Army, by advancing in the Duwayzin-Haddaj axis, cutting ISIS and releasing the unevenness of the south, and are acting with the least direct involvement.

Of course, the last week and before the official announcement of the advances, the ISIL media spoke of targeting the army tanks in Tahmaz, which determined the purpose of the Resistance forces in this direction, and now, with the arrival of the army around Abu Hakfa, everything is completely clear.

Based on the latest information, ISIL has sent some of its own special soldiers to the Qastal of Al-Wastani to prevent the possible withdrawal of their troops from the Qastel, which is now the first defensive line of Uqayribat.

Good progress was made on the Bel`as Mount axis and northern Huwaysis, and the Syrian army managed to liberate areas such as Kharab al-Tawil and Kharab al-Bel`as.

Not so long ago, moving forward in these axes was a dream! But it’s happening now.