President Rouhani: We have not asked and will not ask permission from anybody for the development of our missile capabilities. 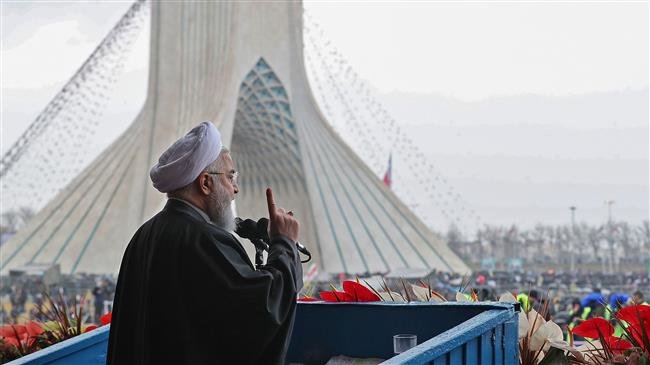 Iran will vigorously continue to boost its military power, President Hassan Rouhani underlined, stressing that the country will never ask permission from anybody for the development of its missile capabilities.

“We have not asked and will not ask permission from anybody to manufacture various types of anti-armor missiles, air defense missiles, ground-to-ground, sea-to-sea and air-to-air missiles,” President Rouhani said in a large gathering of people celebrating the 40th anniversary of victory of the Islamic Revolution at Tehran’s Azadi (Liberty) Square on Monday.

He said “This presence makes it clear that the enemy will never succeed and the Revolution will continue on the same path as in the past 40 years,”. “We will not let America succeed,” he added.

The Iranian president made it clear that Tehran would not ask for permission to strengthen its defenses. He said Iran was not going to roll back its regional influence either.

President Rouhani mentioned about Iran’s assistance for the regional countries, saying the Islamic Republic helped the nations of Syria, Iraq, Lebanon, Palestine and Yemen to achieve freedom and decide their own fate.

Iran’s role in the region is more essential than ever, he added, noting that Iran is the only country that can help establish security in the regional nations.

“Iran’s role in the region has reached a historical peak and no matter what other countries and superpowers say, Iran is the only country that can rush to help regional states,” Rouhani said.