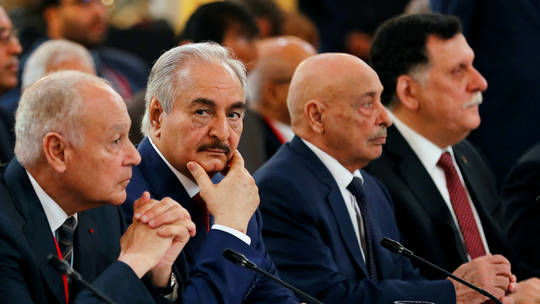 ISWNews Analysis Group: After several days of efforts by Russian and Turkish FMs in Moscow to make ceasefire in Libya, it ended by General Haftar’s walk out.

Due to the enforced ceasefire by Russia and Turkey on their supported parties in Libya, yesterday General Haftar and Fayez al-Sarraj travelled to Moscow for the preliminary talks.
Both sides reached agreement apparently but General Haftar asked time until today to investigate the issue before signing it and finally he walked out on them and returned to Libya.

According to Erdogan, Haftar fled from Moscow not to sign the ceasefire. He expressed conditions that were not acceptable by Turkey and GNA.
He said: If Haftar continues his attacks we won’t hold back from answering his actions.

Next Sunday, Turkish, European, African and Arabic leaders will talk about Libya issue in Berlin conference.