Forming an Islamic government from the US viewpoint; first the green light and finally the destruction 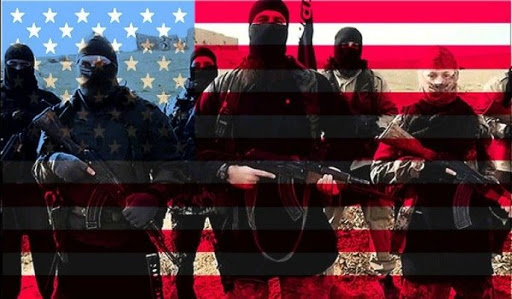 US effort in forming and reinforcement of Islamic states by a Takfiri Salafist group and then destroying it, has been this country’s repetitive scenario in foreign policy in recent decades. The green light that the ISIS group received from the US regarding its formation, has been off for a while and now it seems that we should wait for the formation of a new Takfiri Salafi group in the northwest of Iraq, due to its plan for leaving the Iraq.

Effort for achieving to Islamic civilization through the Islamic system and state in the Iranian Islamic revolution’s Shiite belief, and from the other hand establishment the Islamic caliphate of Messenger of God and establishment of the caliphate state or the Islamic state are from duals that the West have much emphasis for discussing them in the world religious and political literature.

As if the Islamist countries and groups policy is only that to form a government anyway and every religion call its followers right and issue the jihad fatwa for maintaining and helping to this government, to consider killed persons in this way as martyr, and interpret their blood as a strong reason for proving the truth of way and its aim.

Is this really the most important fight of Islamists? or the West hegemony with the help of its powerful media empire has created a problem and has entered the Islamic world problem-solving field as a master? Why is it always the US that removes the terrorist Takfiri groups leaders from the scene so that the world knows that the US is the unique hero in fighting against terrorism?

The West and US in the top, always are a part in the fights arised from sectarian conflicts and civil war in the Islamic countries.

In the conflicts between Iran and Jaish Al Adl, Afghanistan and Al Qaeda, Iraq and Jamaat Al Tawhid and Al Jihad, Syria and Jibhat Al Nusrah and the ISIS, Yemen and Ansar Al Shariah (Al Qaeda branch in Jazeerat Al Arab), Africa and Al Shabab(Al Qaeda branch in African countries of Morocco, Mali,Libya and Tunisia) , US overt and covert efforts indicates how much cares about formation an Islamic state.

How can spend so much to forming an Islamic government while its sanctions draft for other Islamic states are always in the Senate agenda? What is the difference between these Islamic states? Is there any key for solving this puzzle ?!

William McKentes the US former state department adviser and one of the most prominent experts in Middle East studies and Islamist groups, in his book “The ISIS Resurrection” while accounts the ISIS as born of Iraqi Al Qaeda, says: “The powerful foreign countries were provoked to attack on the Jihadist global movement. Remember that the traditional and universal school of jihadists like Bin Laden intended to before forming the government, expel Western infidels from Islamic lands and gain the Muslims public support”.

The riddle is over in our opinion! Saying following two examples are the interpretation for the riddle answer that had occupied your mind for a few minutes.

Blackmail and exaggeration in showing the devil face of Takfiri Salafist by the West and their media and officials pretends that the jihadists are common enemy and a great damage for the whole world, and the world must fight united against them. This coalition is also US-led and make it one step closer to dominating on the whole world and presenting the unique hero (Superman) face.

Let’s go become a little deeper and see behind the scenes. The US first supports Al Qaeda that by spreading it and killing and looting among Muslim countries, that was mentioned before, flame the war fire among Muslims. Then enters Afghanistan and Iraq for fighting with Al Qaeda, and draws the rest of Muslims into this abyss with its allies.

Of course in this battle, the US economy is growing good, first by weapon sale, and second by importing goods into these countries.

The Islamophobia project is also started. After that the Al Qaeda organizes its branches in other countries such as Iraq, Yemen, Syria, Tunisia and Libya and is known around the world, it is time that US enter to the field and by assassinating the Al Qaeda leader Osama bin Laden, to show itself as the savior of Muslims and people of the world. It takes some time that Al Tawhid and Al Jihad (the Iraqi Al Qaeda early core) to grow and establish an Islamic state in Iraq, and after some conflicts between its leaders, the ISIS announces its caliphate; and by this, the most media terrorist group of world claims that revives the prophet caliphate.


Now, this scenario about Islamic State of Iraq and the Levant is repeated again. Military base of Tanaf in the southeast of Syria and same border with Jordan and Iraq, is a place for training of terrorist groups by US. ISIS is spreading fast in Syria and Iraq, while there is no news about American troops presence. After the ISIS horror as a Islamist group in the world becomes the headline of news and Islamophobia is reinforced, and also after ISIS massacres thousands of innocent people and displaces millions of people, now the US and anti-ISIS coalition led by US enter the scene.

The parts that were not destroyed in the Takfiris attacks, are bombed and destroyed by American fighters; because whatever Infrastructures and Muslim residential areas are destroyed, is better for the US and is effective in economy and its Islamophobic project. It supports the flee and withdrawal of terrorists by drone, and protects them to prevent from Resistance forces infiltrate and killing of the remaining Takfiris. It also bombs residential areas under the pretext of terrorists.

In fact, the place that has survived from Takfiris, is destroyed by US and coalition forces. Therefore, end of several years of killing and looting and rape and displacing thousands of Muslim man and woman and child, is that US assassinates its valuable figure Abu Bakr Al Baghdadi in the drone attack and introduces itself as superhero in fighting against ISIS. For more than five years, in the countries of Iraq and Syria, the security, welfare and economy are damaged severly and Resistance axis has got in crisis. As long as these countries and other Islamic countries are involved, in Yemen war, American missiles be dropped on Yemeni innocent people by Saudis, and also in Palestine by secure margin that has been created for Zionist regime, the deal of century and transfering US embassy to Quds are on agenda.

We now understand why McKentes considers forming a united front against Takfiri groups important and why Hillary Clinton former secretary of state, in her book “Difficult Choices” has said surprising remarks and has acknowledged that ISIS is made by the US with the aim of dividing the Middle East.

Earlier, he also had spoked in an interview with Fox News, about creation of Al Qaeda early cores by US in Afghanistan for countering the Soviet Union.The result is clear! Islamic countries must always be in the war to be weaken by themselves and finally be destroyed. Now the green light that had been set for creation of Islamic the Islamic state for the Takfiris, must be destroyed before it turns to a major threat against the US.