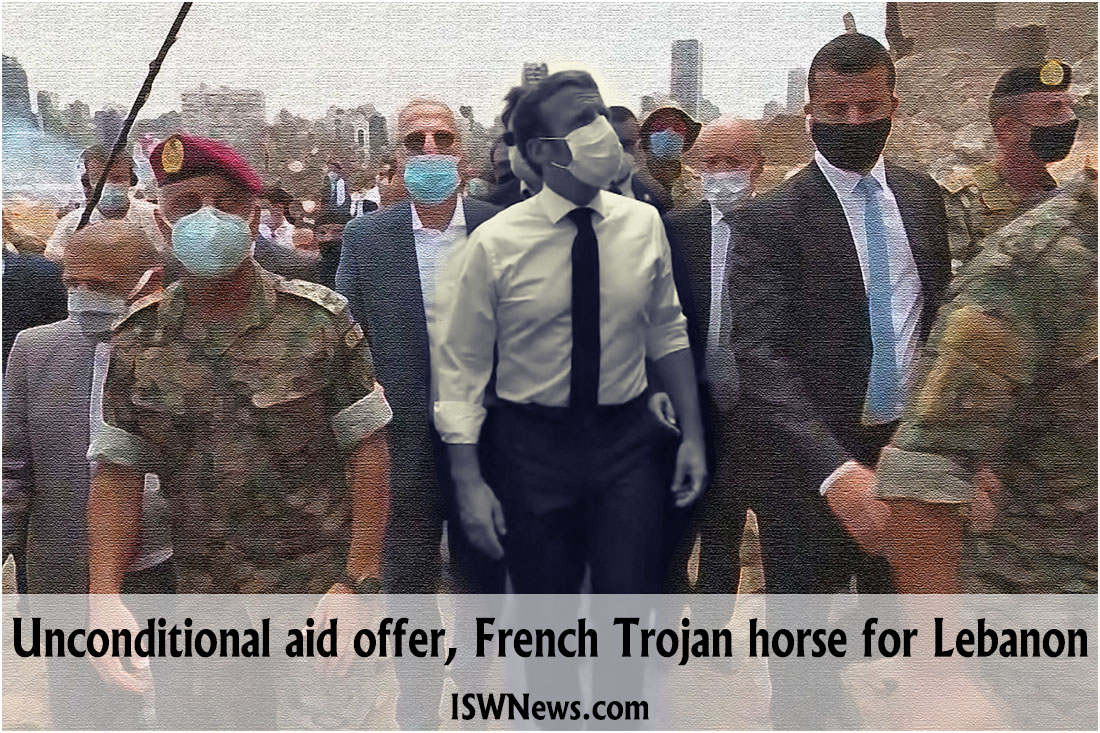 The French president’s suggestion for meeting the Lebanon financial and goods need with the aim of passing the current economic crisis seems to be for restoring this country’s lost traditional infiltration. The issue that if the Lebanese government accept it, will probably should accept its terms, that like other enemies of the Resistance axis, is putting pressure for disarming the Hezbollah. So, Iran’s entering for meeting some of the Lebanese people needs in the goods field by creating a land corridor is very necessary that pressure of public opinion on the government and the Lebanese Resistance be reduced and also, the Iranian economy be connected to the Resistance economy, after years of neglect.

Lebanon today is the product of the decision of victorious sides in the World War I, France and Britain in territorial dividing as the two great colonizers of the lands of the defeated Ottoman Empire after the World War I.

Weakness of power structure, the heritage of the French colonial for Lebanon

After occupation of Lebanon by France and its trying for highlighting the Christians in Lebanon for increasing the infiltration and governing the colonial Lebanon easily, the political rivalry between Muslims and Christians began. In the one side, the Muslims emphasized on their Arab identity and even wanted to join an Arab country (the great Syria, or an super-Arab country including Iraq, Syria, Jordan, and current Israel); and in other side, the Christians that saw themselves powerful in the case of alliance with the Europeans, and some of them did not even accept being Arab; However, Lebanon under the guardnership of France, found an almost French structure, so that even after the declaration of independence in 1943, the French traditions remained in various parts of Lebanese sovereignty, especially in the economy part. Despite the conflict and civil war after the declaration of independence from France, the Lebanese were able to reach an agreement on their suitable political model in the Saudi city of Taif, after 15 years.

According to the Taif treaty, the Lebanese political system became a special kind of democratic governance that in it, in addition to the people votes, the religious dependences are also very influential in the hierarchy of political power; this method of governing is a subset of consensus democracy. In this agreement, it was stipulated that the presidency should be given to the Christians, the prime minister to the Sunni Muslims, and the parliament speaker to the Shiites. This system in division of the power, that emerged due to the civil war with the intervention of colonialism, was turned to a crisis for Lebanon; the issue that Lebanese president Michel Aoun also mentioned it in the recent crisis, and announced the solution for going out of it, as implementing some reforms in the structure of government and the quality of dividing the power.

Neglecting of economic development, among the political conflicts

The Lebanon’s economic structure is also defective, due to its inefficient political structure; in the one side, the dependent view of the March 14 fraction led by Saad Hariri in the economy field, and in the other side, the continuous political conflicts did not allow Lebanon to move towards the economic development. Therefore, Lebanon, despite its potentials in agriculture field and having oil and gas resources in its territorial waters in Mediterranean sea, has moved to foreign aid, including Saudi Arabia and the US, international loans and internal borrowing, and finally the tourism resources. And because of this, is almost a mere importing country.

Saudi aids, that had been almost cut off for imposing political pressure to change the Lebanese government’s approach to Hezbollah at the time of under prime minister of Saad Hariri, that was supported by Saudi Arabia and the US. On the other hand, the International Monetary Fund at the time of current Lebanese government headed by Hassan Diab, refused to lend to Lebanon, arguing that Lebanon debt is high and this country can’t repay its debts; that of course its main reason is rejecting of pressure for disarming the Lebanese Resistance.

Therefore, the shortage of exchange resources and increasing in foreign debt to more than 150% of GDP led to an economic and social crisis in Lebanon; the crisis that its range still continue. This economic crisis with happening the explosion in the port of Beirut in recent days, is leading this crisis-stricken country to a human crisis, because in addition to the lack of financial and industrial sources for replacing the destroyed items, there is no alternative port for importing the needed materials; also, it’s been announced that the financial damage of this fire is about 10 to 15 billion dollars.

Now, France has been the pioneer of aids, for full using of this situation in Lebanon and probably returning its traditional influence in this country; and Emanuel Macron   the French president has announced during the visit to Beirut that he is ready to meet the Lebanon’s financial and commodity needs for reconstruction.

If the Lebanese government accepts the France suggestion for meeting its financial and commodity needs, it will naturally should accept their terms about putting pressure on the Resistance groups; and if it rejects the France suggestion, it will face with a great amount of financial and commodity needs, that if these needs won’t be met, they will face a human crisis. Therefore, the entering of Iran is necessary, for removing the pressure of public opinion from the Lebanese government and the Resistance.

Perhaps Iran’s entering to financial field be difficult, but it can help Lebanon in field of providing some goods and services, that this issue also depends on creating a safe corridor for transporting of goods. Because air transportation is not cost-effective for any kind of export, and also Iran is weak in this field because of sanctions against its aviation industry, creating a land corridor can be a good way for connecting Iran’s economy to Lebanon and other Mediterranean countries, including Syria. The studies show that the al-Bokmal crossing in east of Syria is currently controlled by Resistance forces. In the case of reviving, it can be a good land bridge for connecting Iran to the Lebanese economy and even the Europe and Africa by the Mediterranean.