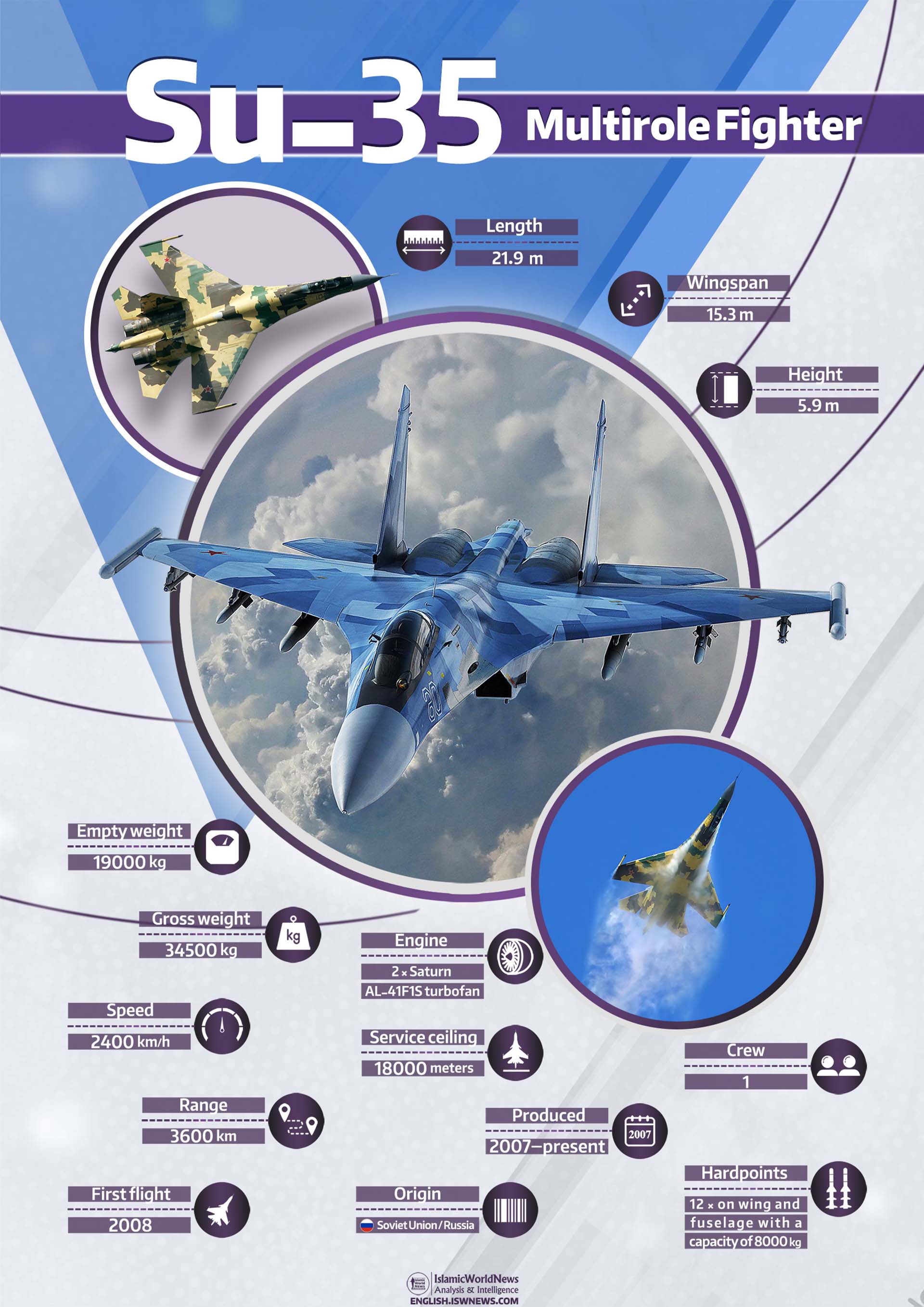 The Sukhoi Su-35 fighter – Flanker-E according to NATO – is a fourth-generation++, ultra-maneuverable and multi-role air superiority fighter jet designed by Sukhoi aircraft maker and manufactured by the Russian Komsomolsk-on-Amur Aircraft Plant (KnAAPO). The fighter was seen as the most advanced Russian fighter jet prior to entering of the Sukhoi-57 into service in 2020.

The upgrade of the Su-35 kicked off from 1980s, when the Russians started developing the Su-27. The fighter jet was introduced as the Su-27 in the first place; in fact, the Russians sought to manufacture a more powerful version of the Su-27 to improve its maneuverability, Avionics (Aviation Electronic), longer range and more powerful engine of the jet. Thus, the first version of the fighter jet conducted the initial flight in June 1988, and then, 15 Su-27 were manufactured prior to the collapse of the Soviet Union.

Following the downfall of the Soviet Union, the Sukhoi Company changed the name of the fighter jet to Su-35 with the aim of attracting purchasers from the global export markets. In 2003, the company initiated the second big upgrade of the fighters and the first flight of the new version took place in February 2008. The aim was to maintain the Russian Air Force fleet up-to-date in order to fill the gap between the fourth and fifth generations of fighter jets as long as the fifth generation of fighters of Russia’s Sukhoi PAK FA would be ready.

The Su-35 fighter jet is considered as the “fourth generation ++” of the fighter jets, which was seen as the most powerful and the most advanced fighter of Russian aerial superiority before the fifth generation Su-57 in order to carry out different defensive and offensive missions.

Design and development of Su-35
The first design of the Su-35 dates back to early 1980s, at the same time when the Su-27 entered service with the Soviet Army. The final version of the Su-27 is identified with the name T-10S. The operation to upgrade the Su-27M began in 1982 and the design was accepted in 1983 with the name T-10M.

The design of the Su-27M is widely similar to the Su-27; however, when it comes to manufacturing the fuselage of the Su-27M, they used small canards in the fighter jet cabin, which is located slightly ahead of main wings. The usage of canards gives the fighter jet an opportunity to carry out maneuvers of higher intensity, while it does not need any revamp and amplification of the key structure.
The other transformations to the version comprise longer tail fins, aerial refueling system as well as larger wheels on the front of fuselage of the fighter jet. Other than the abovementioned issues, one of the distinguishing features of the fighter jet is the usage of an up-to-date fire control system.

The extra powerful turbofan engines and the usage of lightweight composite materials as well as aluminum and lithium alloys are among other features applied in the fighter jet.

The radar installed on the fighter jet is multi-purpose and able to spot targets on the ground.

The Russians installed radar named N012 on the back of the fighter plus the main radar in order to detect missiles fired at the fighter jet. The design was applied on the Su-27M first, and the fighter jet is the first combat plane to be equipped with this sort of capability. In succeeding designs, the radar was detached from the rear of the Su-35 fighter, and the existing Sukhoi-35 fighters do not possess such radars; however, the fighters were equipped with the electronic warfare and jamming systems in the rear section.

Test and operation of Su-35
The Sukhoi Company kicked off manufacturing the first aircraft called the T10M-1 in 1987 that was alike in appearance to the T-10S. Sukhoi’s chief pilot Oleg Tsoi carried out the first flight of the aircraft on June 28, 1988.

During the Su-35’s flight test and test programs, it was found that the aircraft did not have good control during the cobra and tailslide maneuvers. Therefore, the 11th version of the Su-27M with the model number T10M-11 was made by KnAAPO in 1995 exclusively for the installation of an engine equipped with a thrust vectoring nozzle. Finally, this change ended in the construction of the first and only Su-37 fighter.

15 prototypes of the Su-35 fighter (i.e. Su-27M)
15 prototype versions of Su-27M have been made, which are described in the following order:

There is no image of the two prototypes with body numbers 86 and 87.

Sukhoi with body number 704 was a test bed and there is no picture of it.

It should be noted that the tenth version of the Su-27M fighter, named T10M-10, was equipped with AL-41F1S engines to perform tests related to the Sukhoi Su-57 fighter. The picture of Sukhoi with body number 710 above is related to this model.

First official version: Su-27M/Su-35
It is a single-seat version known by the code T-10M. The two initial versions of this model are equipped with a different structure in the front part of the body.

Second official version: Su-37
It is a technology proof version and it is actually the 11th version of Su-27M which is equipped with flight control system, new cabin, N011M radar and AL-31FP engines equipped with thrust vectoring nozzle.

Third official version: Su-35UB
It is a two-seat and training version designed and manufactured by KnAAPO factory. This version is known as T-10UBM-1 and is equipped with the same body as Su-30MKK. Also, the tail fins of this fighter are longer than the Su-27M version. The Su-35UB fighter is equipped with the electronic systems of the Su-30MKK fighter. The engines of this version are of AL-31FP type and are equipped with thrust vectoring nozzle. Although the Su-35UB fighter is a trainer aircraft, it has all the capabilities of a full fighter jet.

Fifth official version: Su-35S
The Sukhoi-35S is a redesign of the T-10BM design for the Russian Air Force and the main operational version of this fighter. “S” stands for the Russian word Stroyevoy meaning “Combatant”.

Salient features of Sukhoi-35 fighter
The AL-41F1S Sukhoi-35 engine is equipped with thrust vectoring nozzle. The Su-35’s thrust vectoring system and integrated thrust and flight control systems allow the aircraft to achieve “super-maneuverability” and enable it to perform post-stall maneuvers at low speeds.
The AL-41F1S engine gives the Su-35 the ability to maintain supersonic speed without the use of afterburners. According to Carlo Kopp of the Australian Air Power think tank, such a “supercruise” feature allows the Su-35 to engage with the enemy at a higher speed and altitude and increase the range of its long-range missiles by 30 to 40 percent.

The Su-35 fighter is equipped with the L175M Khibiny-M electronic warfare system to deal with the enemy. The system is designed for radio direction-finding and probing signal source irradiation allowing it to distort reflected signal parameters. This system helps to delay aircraft detection; mask the true subject against false reflections; cause range finding difficulties namely in speed and angular positions; degrading maintenance mode TWS when scanning antenna beam radar; and increase the time and difficulty of capturing an object during real-time active scanning.

Su-35 is equipped with an OLS-35 optoelectronic targeting system ahead of the cockpit to provide other forms of tracking including infra-red search and track. OLS-35 comprises a heat-seeker, a laser rangefinder/designator and a TV camera along with new algorithms and advanced software to outperform its predecessor installed on the Su-27/Su-30 aircraft family. The OLS-35 provides a coverage of +/-90 in azimuth and +60/-15 in elevation with a target acquisition range for non-afterburning aerial targets of 50 km facing up to target’s front hemisphere and 90 km facing up to rear hemisphere. The laser rangefinder features a five-meter Circular Error Probable (CEP) and ranges up to 20 km for aerial targets and 30 km for targets on the ground.

In the cabin section, while the design of the Su-27M cabin had avionics equipment suitable for a multipurpose fighter, but in the flight tests, the inefficiency of the cabin for the effective use of the fighter’s weapons was determined. Therefore, the cockpit and its systems were redesigned and optimized.
In the new design, the information management system of aircraft’s avionics suite had been changed so that it now has two digital computers which process information from the flight- and weapons-control systems. The information is then displayed on two 9 in × 12 in (23 cm × 30 cm) multi-function liquid crystal displays, which replaced the smaller multi-function cathode-ray tube displays found on the Su-27M. The pilot can also view critical flight information on the head-up display,[42] and is equipped with Hands On Throttle-And-Stick (HOTAS) controls.

Sukhoi-35 is equipped with a GSh-30-1 30 mm automatic cannon in the armament section. This fighter has 12 external hardpoints for loading all types of missiles for air, land and sea targets as well as anti-radar missiles. These hardpoints can also load a variety of guided bombs. The arrangement of 12 Hardpoints is as follows: 2 wingtip rails, and 10 wing and fuselage stations with a capacity of 8,000 kg.

Su-35 export market
The Sukhoi-35 fighter to attract export customers in Dubai in 1993 and piloted by Viktor Pugachev engaged in an aerial battle with the Su-30MK fighter. After this, the fighter once again flew in air shows in Berlin, Paris and Moscow and showed its features to the public.

In the late 1990s and early 2000s, Sukhoi had negotiations with South Korean officials to sell the fighter, but the negotiations were unsuccessful. The company also presented its designs to Brazil, China and the UAE.

Egypt was one of the main customers of Su-35 and ordered 24 of this aircraft to Russia. But this order was canceled due to US threats. The US had threatened Egypt that if it buys fighters from Russia, it will be subject to US sanctions. Also, Indonesia, which had ordered 11 planes of this fighter, along with Algeria, canceled the order and purchase plans of Sukhoi-35 for similar reasons.

Currently, Russia with 88 and China with 24 planes are among the main users of this fighter.

According to Sukhoi’s estimate, this company has the ability to sell 160 of these fighters to Latin American countries, Southeast Asia and the Middle East. The first order of this fighter was made by the Ministry of Defense of Russia in 2009, which was 64 aircraft.