Local sources reported seven officials of Mansoor Hadi Army are killed and wounded due to attack. They had a meeting in the base.

According to Yemeni Armed Forces Spokesperson and AnsarAllah, Qasif K-2 is the new drone which is more capable than previous version.

This attack was done after accurate intelligence operation and in retaliation to Saudi Coalition attacking Yemenis. 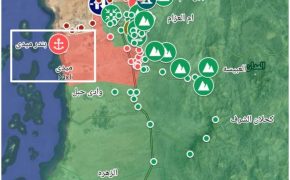