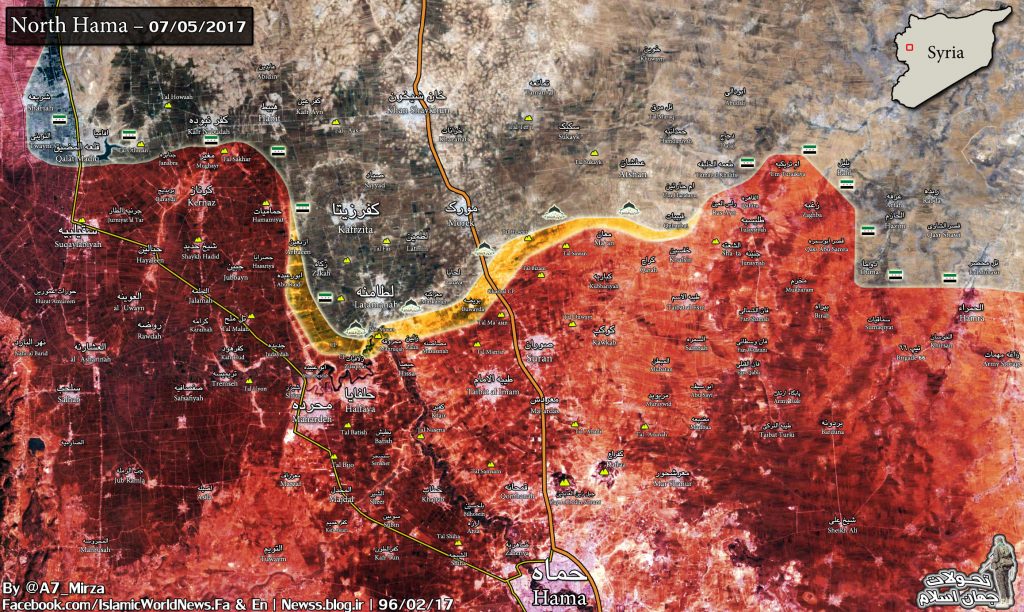 In less than 48 hours after the start of the operation, “ya ebadollah othbeto,” it seems that at least Tahrir al-sham in the first phase of the operation faced a major defeat, and unlike the early stages of operations in northern Hama without the slightest achievement.

The villages of Qaherh, Sha`tha and Taliysia, which were evacuated by the army during the early hours of the invasion, and they were repossessed in less than 24 hours by army, and according to the information at least 104 militants were killed in the operation.

While about 38 Syrian troops were martyred at this attack

Five tanks, four BMP and 11 vehicles having machine gun of Tahrir al-sham were also destroyed. Meanwhile, the forces of Soheil Hassan and many of the sub-groups who were present in the previous operations of the armed forces in Hama, who are currently fighting in the Deir Ezzor Front, were not called to confront the Tahrir-al-Sham operations on the northern front of the Hama.

The presence of the largest free army coalitions such as Jaish al-Nasr and Jish al-ezzah under the command of Tahrir al-Sham in this operation, the statement by the Russian defense ministry that the 35 armed groups in Idlib are ready to join the Syrian army is not very reliable, and even if they are correct, They can not be among the great Free Army alliances in northern Hama and Idlib, such as Jaish al-Nasr, Jish al-ezzah and Jaish Idlib, and they won’t be effective in these areas.