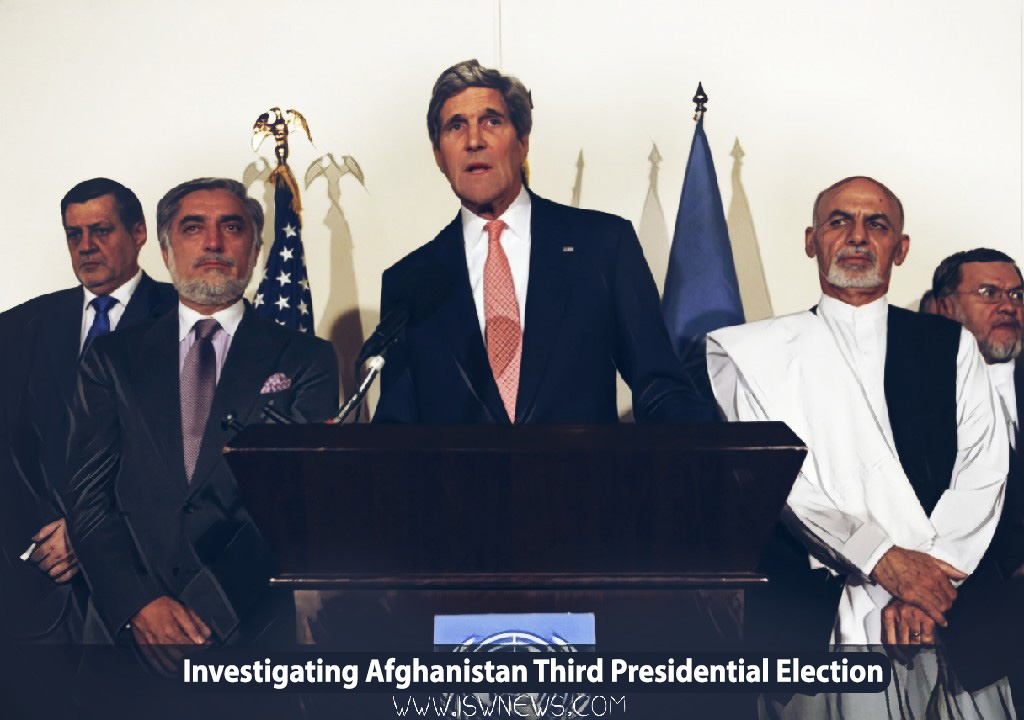 Afghanistan is going to hold the third presidential election while the negotiation between USA and Taliban is interrupted and the central National Unity Government, which is just controlled by others and power division between different movements, is at position of weakness.

Regardless of heated discussions of previous elections, that where about excuses for other countries specially USA to interfere, fraud, political tension, etc., the third election is also confronting challenging issues.
Taliban-USA negotiation failure, Taliban and ISIS threats during the voting, reduction of foreign fundings, passive stances of some politicians and people about the election and directed stances of Afghanistan neighbors and foreign countries are among the challenges ahead of the third election that can question the health of the election.

The voting is scheduled for 28 September 2019 with 15 candidates, among who 2 seems to have higher chance:
1. Ashraf Ghani
2. Abdullah Abdullah

Ashraf Ghani started his campaign with “state builder” slogan and his plan is stated as forming a team of 4 to manage, decide and sustain peace in the country, implementing Amanuallah Shah’s plans, preserving presidential system and confronting local and independent powers.
Abdullah’s slogan is “stability and integration” and like before he wants to change the system to parliament based and adding a prime minister. He also wants to amend the constitutional law under Loya jirga(House of Afghanistan Tribes).

One of requirements of election in Afghanistan is to choose two vice-presidents and assigning them by Abdullah and Ghani has messages.
Ghani’s vice-presidents are Amrullah Saleh (Tajik and close to late Ahmad Shah Masoud) and Sarwar Danesh (Hazara Shia and member of Islamic Unity party). On the other hand, Abdullah has picked Babar Farahmand (Turkmeni and close to Gen. Dostam) and Asadullah Saadati (Hazara Shia and a member of Islamic Unity).
Picking vice-presidents from other tribes by Pashtoon Ghani and Tajik Abdullah is their strive to have vote of other tribes like Hazara and Turkmen. Therefore we can see tribal considerations are still highly valued in Afghanistan politics.
At the moment most of chiefs of Turkmen, Hazara and Tajik supported Abdullah and Pashtoons, Qizilbashs and part of Hazara (maybe due to their hatred toward Islamic Population party) chiefs supported Ashraf Ghani.
Other officials and politicians are either candidates such as Gulbuddin Hekmatyar and Ahmad Wali Massoud or not candidate but in despite of directional statements seem to be neutral such as Atta Muhammad Nur.

We can’t predict who wins the election but in the opinion of analysts and political followers, Abdullah has a better chance similar to the last two times.
Considering the history of presidential elections, fraud and foreign (specially USA) interference is obvious and even it is not unlikely that US Secretary of State comes to Kabul and divides the power and make USA in charge again without headache, unless Afghans instead of fighting between themselves fight foreign exploitations specially US and Europe.

Neighbors with influence like Iran and Pakistan have not commented yet and usually adopt their policies with the elected government later and even controversial stances of different governments usually do not matter to them.
In some analyses, it is stated that Abdullah’s views are closer to Iran’s and if he is elected the influence of foreigners are reduced and will incline toward Iran but considering the history of relationship between Islamic Population party and Iran before does not show this. Since Afghanistan parties in the last 4 decades have always used the foreign relations in the favor of domestic policies. No matter if it is Iran or Saudi Arabia. Sometimes they join Saudi against AnsarAllah and sometimes along with USA want to talk with Taliban. Depending on what is in the interest of their party!