Nasrollah: Qasem Soleimani’s revenge is to eliminate and expel each and every US base, vessel and troop in the region.

Before the speech, the audience chanted slogans in Persian congratulating Qasem Soleimani and al-Muhandis martyrdom, showing condolences with Iranian.

Sayyid Hassan Nasrollah:
– Thursday evening, 2 January 2020 is the start of a new history and step in the whole region and not only in Iran or Iraq.

– Although my last meeting with General Soleimani dates back to first day of the current year but a few weeks ago I told him that US media have focused on you and call you “non interchangeable general” and this is the political introduction to assassinating you. He smiled and said Inshallah(God Willing).

– Qasem Soleimani is the biggest enemy of Israel since its establishment.

– I am not commander of Iraqis and won’t order but based on my understanding of graceful Hussaini and Abulfazli resistance groups I say that if the US forces expel from Iraq is not passed in Iraq’s parliament, these groups won’t let a single American troop to stay in this country.

– Qasem Soleimani and Abu Mahdi al-Muhandis have no counterpart in USA administration. Qasem Soleimani’s shoe is worthier than Trump’s and all officials of USA heads.

– Revenge for General Soleimani is remove of all and each of bases, vessels and soldiers of USA from the region. US army committed the crime and should be revenged for. I don’t mean civilians, businessmen or doctors of USA. Hurting these people is in favor of Trump.

– When US army soldiers’ coffins start to come to USA, Trump and his administration will understand what they have done. They lost in the region and will lose the election too. The revenge of General Soleimani’s and Abu Mahdi’s blood is US troops exit from the region. When USA is exited from the region, Zionists should also leave and maybe there is no need to war with Israel. It seems Americans don’t know what they are doing.

– When they came to Lebanon, resistance, liberation in 2000, 2006 war and increasing the strength of Lebanon’s resistance and missile strength, specially accurate missiles, stability and strength, they face Qasem Soleimani.

– USA and Israel went to Syria, and had hope in Takfiri terrorists, Qasem Soleimani was beside Syrian army, nation and officials. When they wanted to control Iraq, and using ISIS play with Iraq for tens of years, they saw Qasem Soleimani there. They hoped to tore Iraqis apart and they saw there’s a person to unite them and he’s Qasem Soleimani.

– When they went to Afghanistan they saw Qasem Soleimani. He was present in all of details of resistance. But Iran. It was obvious that they knew how valuable was Qasem Soleimani for Iran… (Sobbing). 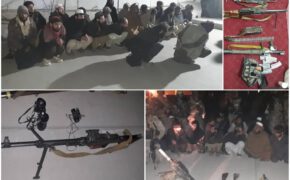