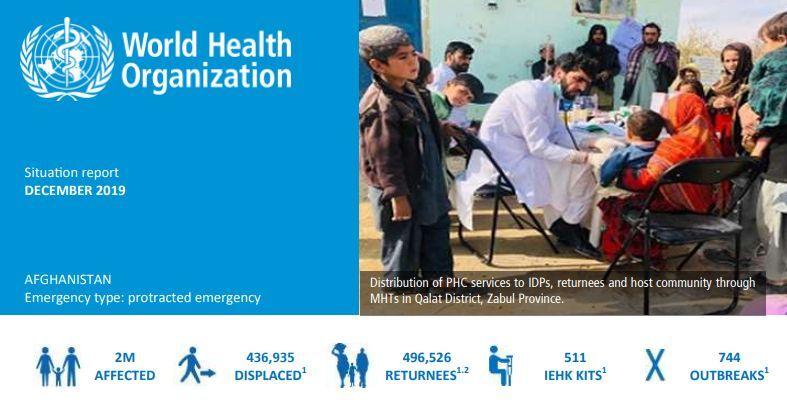 ISWNews Analysis Group: The World Health Organization (WHO) released a report on the situation in Afghanistan on December 2019.

According to WHO:
– Conflicts forced 6,772 people to flee from their homes in December, bringing the total number of Internally Displaced People (IDPs) to 436,935 in 2019.

– 32 provinces out of 34 experienced natural disaster during the period damaging 24,959 houses and destroying another 14,121 houses. Afghanistan is prone to earthquakes, flooding, drought, landslides, and avalanches3.

– Since January 2019, 496,526 people returned to Afghanistan from Pakistan, Iran and Turkey with significant needs in health and other basic services.

– 121 attacks on healthcare were reported since January 2019, resulting in the closure of 192 health facilities, where only 34 of them were re-opened. A total of 51 healthcare workers, patients and supportive staff were killed and 142 others injured.

– According to the projections of Afghanistan Humanitarian Needs Overview 2019, throughout the year, 1.9 million people were in need of emergency health services due to conflict, natural disasters and a lack of basic services.