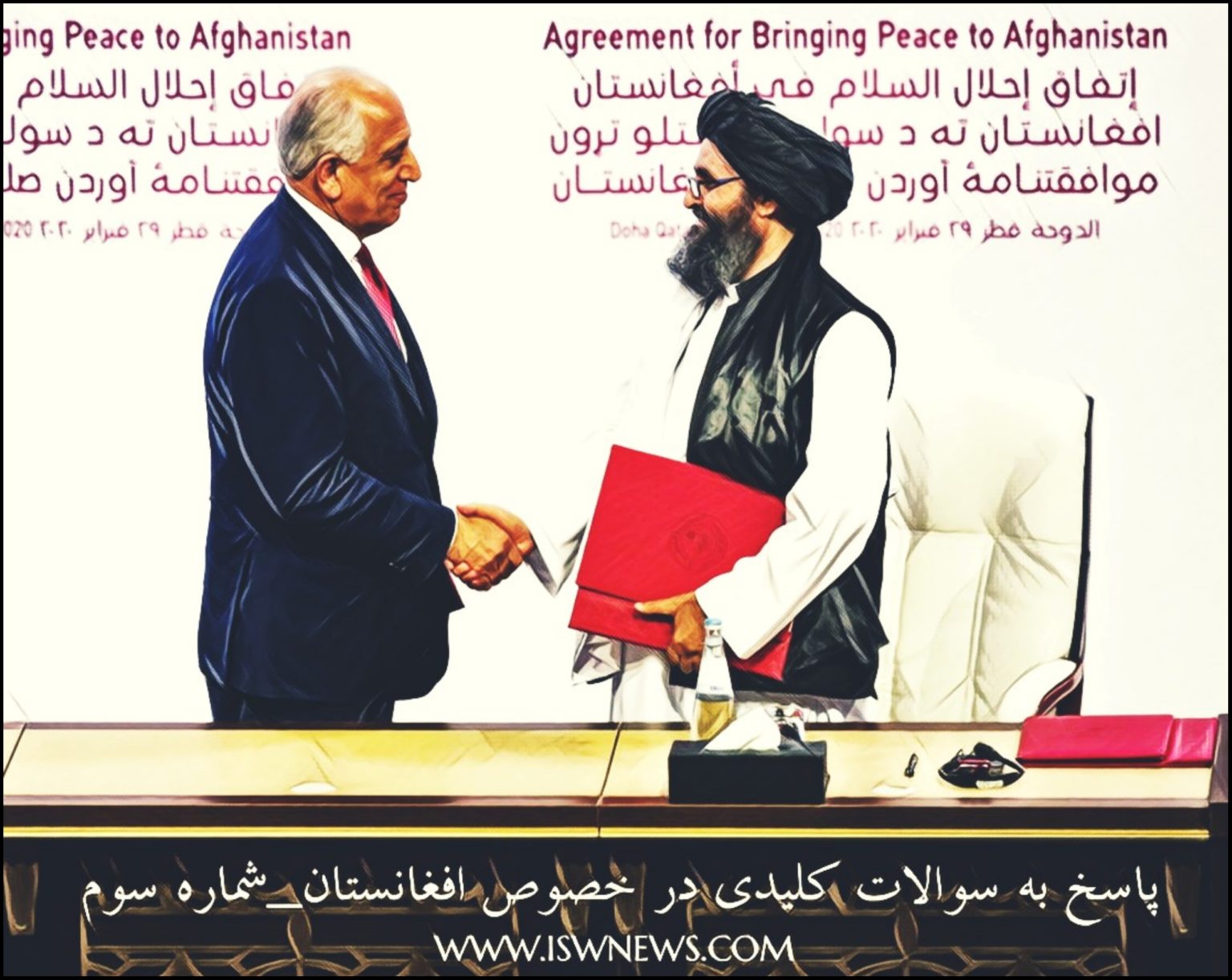 USA agreement with Taliban signed while Afghanistan political situation is critical after the fourth presidential election and the new government has not started yet. Zalmay Khalilzad playmaking to contain this crisis and silencing Abdullah and Ghani quarrel are signs of dreadful deal between USA and Afghanistan.

Due to political discords between Abdullah Abdullah and Ashraf Ghani, Afghanistan is left without government and after an election with very low participation, both of them are trying to form a government, which has been delayed by USA interference.
Approaching the agreement with Taliban, Zalmay Khalilzad was tasked to force Abdullah Abdullah to silence and now according to the agreement, different political groups are supposed to talk with them to form a joint government. Now Taliban calls itself savior of Afghanistan.

– Who is the winner?
Taliban and Trump are the winners.
Taliban could force USA and NATO to leave after 18 years of war and rescue its prisoners. Therefore Taliban is the main winner.
They also have upper hand in future of Afghanistan due to two reasons:
1. Claiming to defeat and exiting USA.
2. Low participation in the recent election, since Taliban claims most people supporting it and did not want to participate in election of a West-backed government.
The second winner is Donald Trump. He needs bargaining chips in the coming election. He was unsuccessful in dealing with Iran, thus, agreement with Taliban and returning soldiers from Afghanistan is considered to correct previous presidents’ mistakes and a higher hand for him in election debates.
This deal brought good domestic privileges for both sides of agreement.

– What comes after the agreement?
According to the agreement, both sides have a long way to reach their demands. Foreign forces evacuating, Taliban prisoners freedom, lifting sanctions on Taliban, forming the government, etc. require both several months time and fulfilling preliminary obligations. Considering USA stained history of tearing up agreements, the future is vague and anything can happen.
Some say since this agreement was signed in presence of countries such as Pakistan, Turkey, Qatar, Uzbekistan, etc., USA cannot violates it, however, it should be reminded that JCPOA between USA and six powers on one side and Iran on the other side had a similar situation but USA stepped down as usual.
What can countries without any power in front of USA do to save this agreement? In addition they do not have any role or information on it.

– What is the future of government in Afghanistan?
Taliban thinks they are the definite winner of this agreement as reflected in their statements that the future government belongs to the movement which has the higher vote, while there is no strong and charismatic person or group defying them in Afghanistan. Most of officials and politicians in Afghanistan are either weak or westward, and do not have power without foreign countries support.
The only hope of anti-Taliban movement is in coalition of Abdullah Abdullah and Ashraf Ghani, which is to return to the first square, i.e., “unity government”. We talked about unity government before and its disadvantages such as chaos, political corruption, insecurity.
Forming a unity government with Taliban is impossible, unless they change their ideologies, which means Taliban changes its Deobandi and Salafi tendencies and incline to the West. Above all, Taliban believes the government belongs to the one with majority of votes and does not share power.

– Foreign countries’ stances regarding Afghanistan and the agreement between USA and Taliban?
Afghanistan has several sects and tribes like other Islamic countries, accordingly forms the power of other countries such as USA, Pakistan, Turkey, Iran and Russia.
Movements of Afghanistan can be divided as follows:
1. Westwards close to USA; Ashraf Ghani.
2. Abdullah Abdullah who is close to USA and Europe.
3. Taliban supported by Qatar, Pakistan and somehow Russia.
4. Shia parties, some of which are supported by Iran and in general do not have much power in Afghanistan and due to racial differences are forced to coalesce with other movements.
5. Genral Dostum who is supported by Uzbek and Turkmen groups and Turkey.

Other movements do not have substantial power or powerful people such as Hamid Karzai, Gulbuddin Hekmatyar, Abdul Rasul Sayyaf do not have a movement.
We also observe individuals such as Zalmay Khalilzad who are godfathers in Afghanistan incidents and implements USA hidden plans from forming unity government and the president to negotiate with Taliban and all groups are forced to accept him.

– What is USA plan for Afghanistan?
USA plan for Afghanistan is very hidden and mysterious. They gave many privileges to Taliban, as if Taliban is in power in Afghanistan, while it is hard to believe USA will leave middle Asia easily. Occupying Afghanistan means to control Russia’s China’s and Iran’s influence in Asia and Afghanistan is the best place to do so. Thus, it is unlikely USA leaves without plans.
In the agreement, USA talked on freeing prisoners, issuing passport and visa, forming government, etc., and ignored Afghanistan people and government. Therefore USA considers Taliban as the real power in Afghanistan and people, government and parliament opinions do not matter to them.
The talks about future government of Afghanistan will be discussed in Afghan groups talks and we will see that tribal-religious discords and political share will result in such a dangerous competition.
Maybe that time we realize the meaning behind Taliban leader’s general pardon, USA hidden plan to divide Afghanistan and having different opinions in a so called Islamic government.