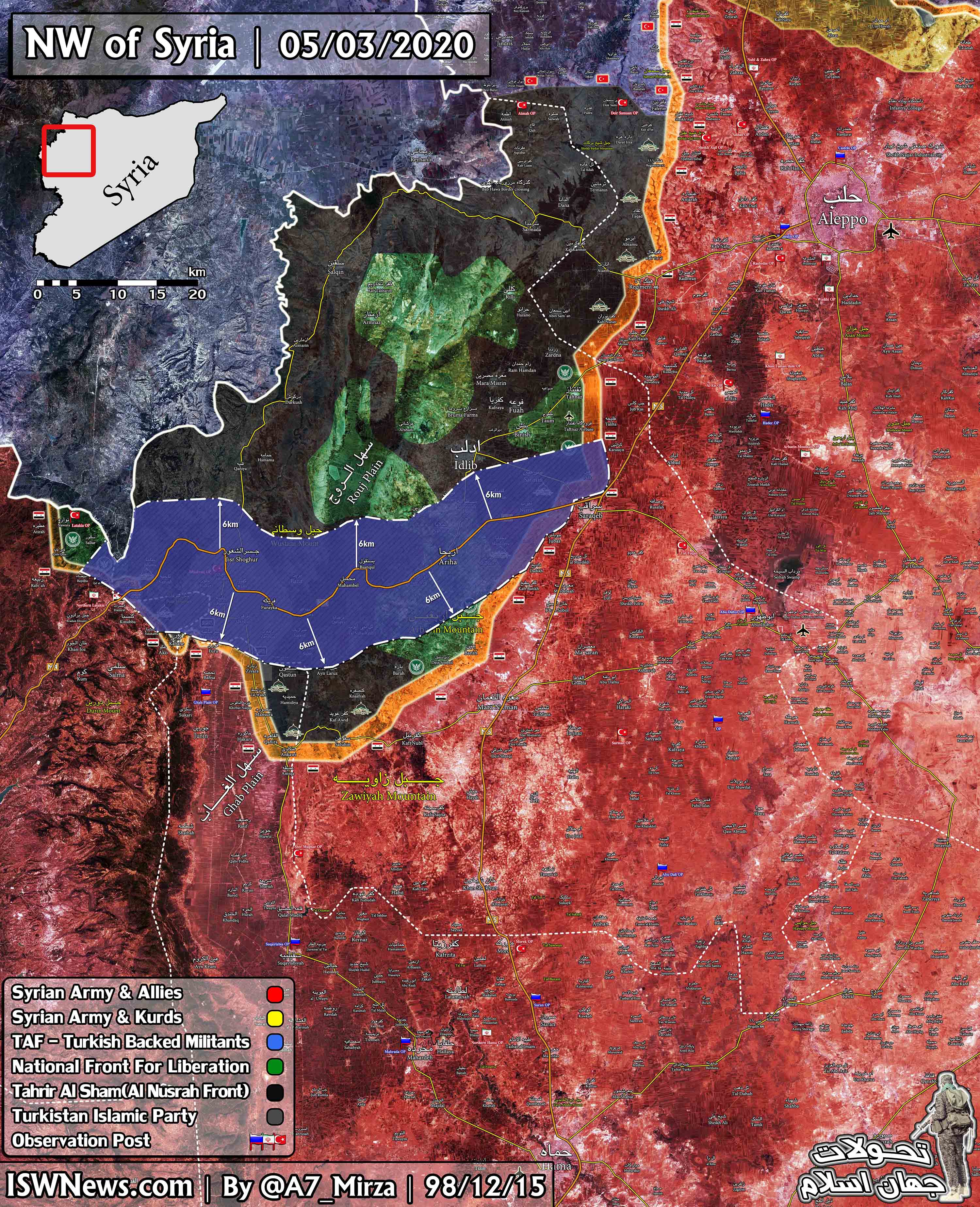 Moscow summit is over and Putin and Erdogan said they’ve reached an agreement on a new ceasefire in Idlib area. We will analyze the ceasefire.

The ceasefire is enforced from 00:01 of 6 March in Idlib area and both sides are obliged to obey it. It includes three main parts:
1. All fights to be ceased along current front lines from midnight 6 March
2. Russia and Turkey will make a six km wide security corridor north and south of M4 highway (Saraqib-Latakia).
3. From 15 March there will be joint Turkish-Russian patrols along M4.

This agreement is announced while Erdogan’s demands were totally different before the meeting, which clearly shows Erdogan’s retreat from his stances.

In the following, we will discuss some important points about the Idlib ceasefire:

– Syrian army will still have the full control of M5 highway (Aleppo-Damascus). Having M5 under control is a strategic position and stabilizes Syrian army’s military presence in Idlib area. Turkish army claimed before the talks that Syrian army should retreat from M5.

– The important point is that terrorist groups such as Tahrir al Sham and allies are not included in this agreement and they are still legit targets for Syrian army!

– The feat of this agreement is the 6 km safe zone in north and south of M4 highway! Entire road from Saraqib to Jisr al-Shughur is out of control by Syrian army and most of it are controlled by terrorists from Tahrir al Sham, Turkestan Islamic party and other al-Qaeda terrorist groups.
It means that the most strategic areas that terrorists have occupied for many years and constitute their strategic depth should be evacuated.
Joint patrols will start from 15 March in M4 and most probably terrorists won’t get along with it and since they are excluded from ceasefire, the operation by Syrian army is very likely.

– Only Turkish forces will remain in Idlib area, however the situation of Turkish observation posts inside areas controlled by Syrian army are still unclear. It is possible that they still remain in the area for a while or until the end of operation in Idlib to save Turkey’s face and finally are collected without much noise. Unlike what was boasted about Turkish military power, these besieged observation posts can be used as hostages by Syrian army against Turkish army.

– By accepting this agreement, Turkey has recognized officially Syrian army’s achievement in the last four months, in despite of its rhetoric. Turkey also implicitly accepted that they cannot assault Syria’s soil directly.

The reasons behind why Turkey succumbed to such an agreement and defeat needs a separate article but briefly it can be attributed to Syria and allies resistance in Idlib, lack of NATO and US support for Turkey, Erdogan’s unstable political situation and Turkish elites’ critiques of Erdogan and the reigning party.

The ceasefire has started in Idlib area and we should wait and see which way does Syria go, but we should remember that Syria still has a long journey to stable peace and security. These agreements are small steps toward the goal, Syria has still challenging issues to address, some of which hasn’t even started yet!