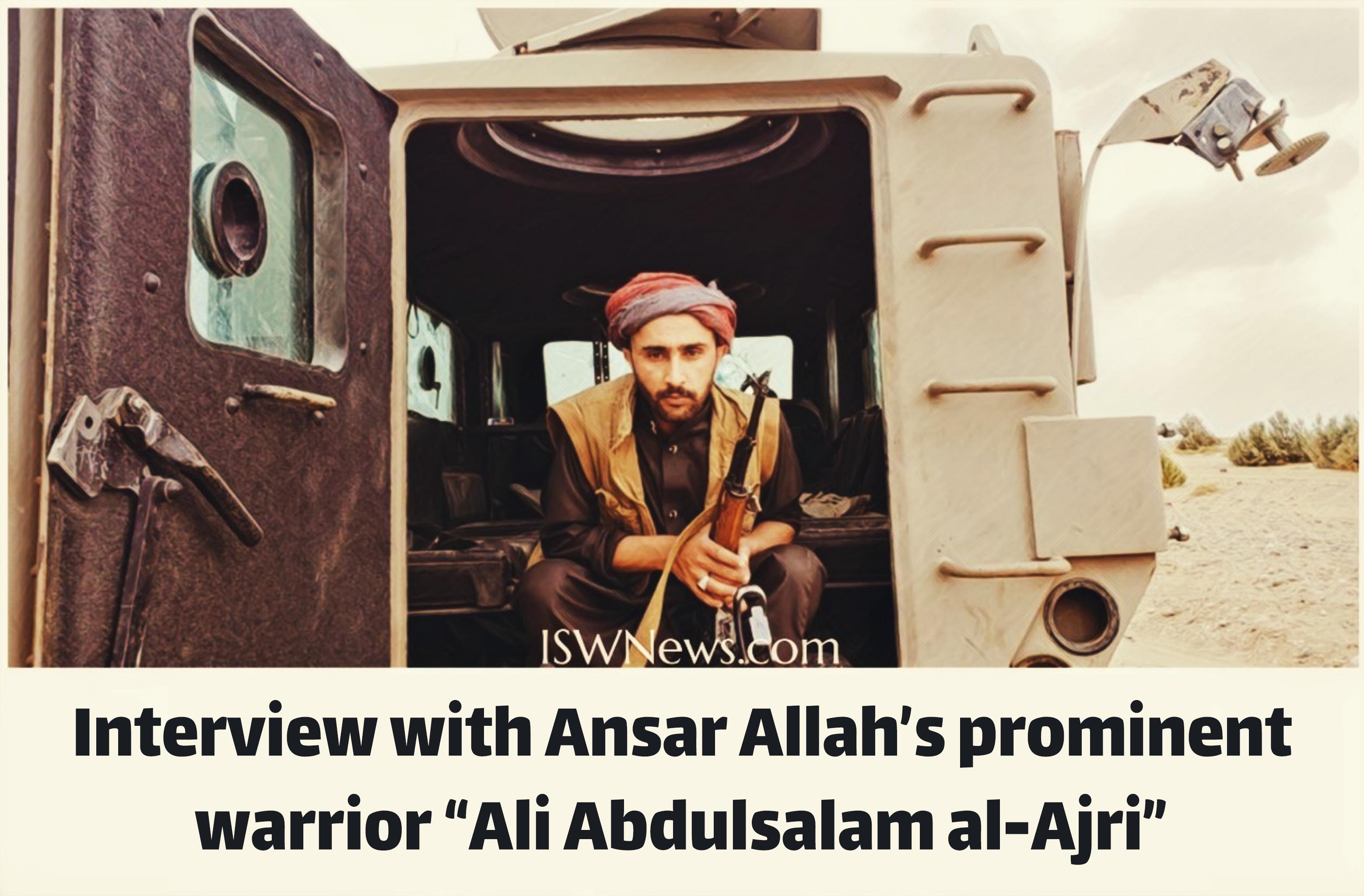 “Ali Abdulsalam al-Ajri” is one of Yemeni warriors of Ansar Allah movement who is active in social media due to his knowledge of Persian in addition to fighting against Saudi coalition. He is 33 years old from Dhahyan historical area in Saadah province. Dhahyan area locates in northwest of Saadah city and had many scholars and heroes of Yemen came from here. This interview took place six years after the war and siege of Yemen started to talk about the latest updates on Yemen and its people.

1. How is people’s situation in different places of Yemen?

I first thank you dears for this interview, it is an honor for me. Unfortunately we see a sad, painful situation in this severe siege, the living condition is very difficult specially under heavy bombing using advanced banned weapons by enemy. The situation is worse in provinces Saadah, Hajjah, Hudaydah and Jawf. Other provinces do not have much trouble and are different from the aforementioned provinces, however they also have difficult living situation and once in a while, bombing by enemy, the salaries are not paid on time, lack of medical necessities and social issues happen there.

– How is the influence of bombing and crimes of Saudi coalition on people?

It is impossible to explain or even imagine the bombings. Thousands children are orphans, thousands fathers lost all of their families, thousands are mutilated, lost their homes or work place. Unfortunately the effect of war is severe.

– Are people tired of the economical pressure and enemy’s attacks or their resistance increased?

Thank Allah people are getting used to the siege, hunger and war situation and started to grow wheat, corn and vegetables. Our people started to produce military equipment, ammunition, drones, ballistic missiles and other products such as sanitizing materials, clothes and other simple goods by trusting in Allah. This is the positive result of resistance which increased the spirit, eagerness and trust of Yemeni people to themselves.

2. You participated in operation “Faamkana Minhom” for liberation of Al Jawf. Could you please talk about it?

It was Allah’s blessing that I participated in this operation. The operation started three months ago by dividing the front line between army and people’s immobilization forces secretly while no one could imagine. Even most of the forces did not know about the operation there and thank to Allah this operation had unexpected victories for us. We knew Allah is victorious and nothing can stand against His will. We learned from this victory that our responsibilities about oppressed nations is to rescue and defend them, on top of it, Palestinian people. We only consider these battles as an exercise for the ultimate battle of unrooting Israel.

3. Please tell us about Marib.

Marib battle was important and is the administrative capital of Saudi mercenaries, which blow them hard if it is liberated.  Marib is like a vast harbor with oil and gas reservoirs in it and also historical capital of Yemen. Its liberation will hit USA very hard. In Marib there are noble Yemeni tribes which have deep roots in Arabian Peninsula such as Murad, Abidah, Dahm, Jahm, etc. These tribes were the first ones to realize the enemies of our nation and men of them backed off from the administration supported by the evil coalition which resulted in weakening and humiliation of them. Now we see that Saudis started retreating and removing their heavy equipment from Marib since they are scared that Marib is liberated by AnsarAllah any time.

4. Did you participate in battle against ISIS and Al Qaeda?

Yes, in several axes and fronts including Nihm front (northeast of Sanaa province), Majzar (west of Marib) and Baqem (north of Saadah) participated, that I want Allah to accept it and bless me with martyrdom in His way.

– What was ISIS and Al Qaeda purpose from fighting with Ansar Allah?

Their mission was to take over the soil, exploit the wealth, infrastructure and reservoirs and controlling all the ports and passages, different ministries from education to defense, trade and industry. They are after controlling people’s thoughts and culture and distorting the Islamic identity and our believes. This is their first mission. They want us to stop worshipping Allah. They want to replace our genuine Muhammadi Islamic thoughts with Wahhabi Zionist ideologies of ISIS.

– Who supported Al Qaeda and ISIS in Yemen?

Al Qaeda and ISIS supporters are usually not Yemeni who are trained by USA and Israel and sent to Yemen and unfortunately they have a few tribes supporters. The provinces that were influenced by Wahhabism in the last four decades. These tribes are mainly in Marib, al-Jawf, al-Baydha, al-Dhale’ and a few other provinces. We can’t find a specific number for them but less than one percent of population of these provinces.

– In videos and images, we could clearly see the support of Saudi coalition for them, why?

They are paving the way for USA occupation and their influence on us in all aspects and they want to raise the devil’s flag by generously supporting ISIS, but Allah’s will is above all wills, and His word is above all words. As long as our people are fighting and martyred and accept the guardianship of Allah, the Prophet and Ahlulbayt, it is impossible for this country to be defeated. This is Allah’s promise, and it won’t be violated. As our leader Sayyid Abdul-Malik Badreddin al-Houthi, said: It never was, is and won’t like that, as Allah permits.

5. Are you in contact with Ansar Allah commanders and leaders?

Yes, from bottom to top.

– What is the view of Yemeni warriors on the Ansar Allah commanders such as Abu Ali al-Hakim, Mohammed Ali al-Houthi, Muhammad al-Bukhayti, etc? Please tell us about their behavior.

– What is the opinion of Ansar Allah warriors over Iranians and other Resistance groups such as Hezbollah?

Sayyid Hussein Badreddin al-Houthi was always inclined and promoting toward Islamic Republic of Iran led by Imam Khomeini against the global arrogance. He also invited us to Islamic Resistance in Lebanon and said in one speech that Hezbollah are our teachers in fight due to their experience of fighting with Israel. We have brotherhood feelings toward our brothers in Iran, Lebanon and any free person in the world. Our goals are one, our problems are one, which is the problem of Palestine which never will be normalized or weakened by agreements or intrigues. However, until people seek Allah and Ahlulbayt’s guidance and don’t put their weapon down against the arrogance, oppression and dictatorship.

6. What is Ansar Allah and you as a Yemeni warrior plan for next generation of Yemen? How do you bring up your children?

Our plan in the independent Islamic Yemeni government is a united Islamic advanced nation with pure Muslims whose agenda comes from Quran and Ahlul Bayt life conduct, and by trusting in God and our own wealth and people in all small and big issues. This is how the nation is reformed. We will teach our children by glory, dignity and freedom and will teach them what we have learnt from God. Our real enemies are only Jews and we warn Muslims not to be corrupted and will teach our children.

7. Can you describe these people in one sentence?

Ayatullah Khamenei: Leader of free men of the world.

We invite all free men and Resistance forces of the world to protest under “Stop war against Yemen”. I ask the Resistance axis, on top of them Iran, to help oppressed Yemeni people in all means and take action to break the unjust siege against us and do their role. As God almighty told Musa to go to Pharaoh (arrogance of the time) and stand against him, along with your brother Aaron, he did his task. I ask you to pray for us and all oppressed ones in the world and for peace.

I ask brothers of “ISWNews” to strive day and night to show the oppression happening to us to the world and I thank you for this interview.