Jordan, From Shia Crescent to A Hidden Dagger in the Back of the Palestine! 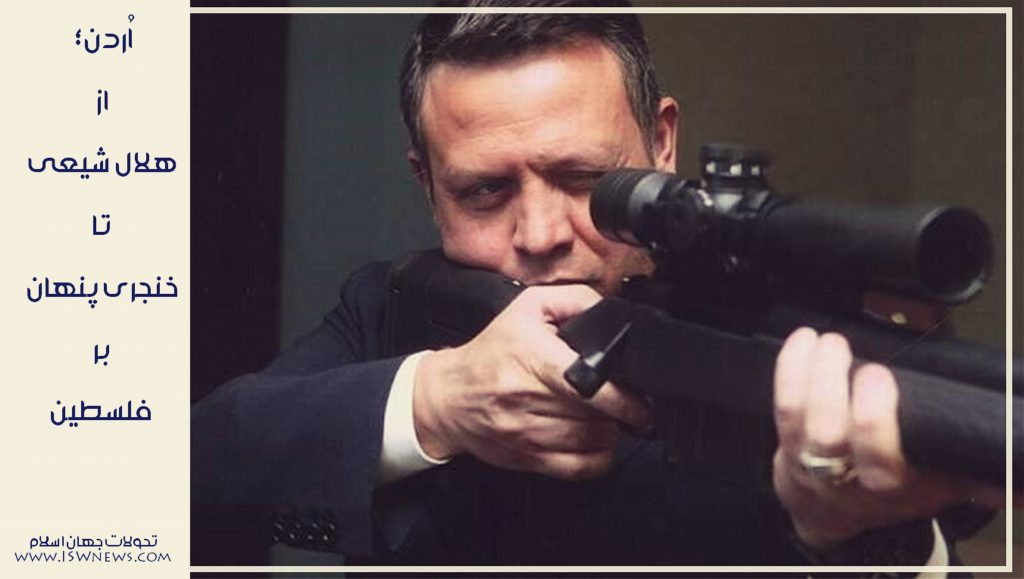 Researching about the role of Jordan, officially “The Hashemite Kingdom of Jordan”, in the past decade in West Asia, seems to be so hard, its because that accessing to documented information is not easy. however, its safe to say that the only country that has been safe from the “Arab Spring” and “Takfiri Sedition”.

Jordan with its particularly sensitive and geographical situation –located in the east side of the Jordan river– came to existence less than a century ago (72 years) by “Winston’s Hiccup” ( also known as “Churchill’s Sneeze”), a country which originally was an outcome of dismanteling the Ottoman Empire after World War I in “Treaty of Sèvres”, it was known as “Trans-Jordan”, a British protectorate established in 1941, and later became independent in 1946.

Jordan:
Jordan is the name of a country, and a river in west Asia. neighbouring with Syria from north, Iraq from northeast, Saudi Arabia from east and south, Occupied Palestine & West Bank from from west, and Gulf of Aqaba from south.

Its main cities are, “Aman” as its capital, located northwest of the country. alongside with “Arbad” and “Arzorgha” in north.

The Hashemite Kingdom of Jordan, which is a “constitutional monarchy” , is divided into twelve “Governorate” and each governorate is run by an appointed governor by The King himself
The executive branch is in the hands of the king, he appoints prime minister and ministers. every law needs approval of the king.

The Jordan parliament is consisted of “Senate”, senate members are appointed by the king, and “House of Representatives” they are elected by the people. 2/3 of parliament can revoke the king’s veto.
The king has control over Armed forces ,security and intelligence forces, declaring war, appointing and removing the judicial position.
The population of Jordan is 9.5 million, which 3 million of them are refugees, and 2.2 million are Palestinian and the rest are Syrian ,Iraqi, Libyan, Yemeni, etc…
The Jordanian government has legislated a law which allows non-jewish Palestinians to migrate to Jordan and become a citizen of Jordan.

1- The Shia Crescent:
The Shia Crescent is a term which was used by King Abdullah II of Jordan used it for the first time in his interview with Washington post (In December 2004), he claimed that Iran is behind it which starts from Yemen to Lebanon and puts them under his influence, aiming to rule over east Asia.

After King Abdullah, Hosni Mubarak and the former king of Saudi Arabia were of those who used this term about Iran and the “Islamic Resistance” movement, and assumed it to be a real danger for them.

The actions of Jordan which have been going on for more than 20 years, is not irrelevant to this matter:

The shias ceremonies are held in a very controlled locations and sometimes are cancelled. heretofore many people in Jordan are arrested or imprisoned because of spreading Shia. officials like “Jihad Al-Mohaisen” ( The head of the centre for studies and research & The adviser to minister of political development ), that showed tendency towards Shia and was expelled from any sensitive & government posts.

2- A hidden dagger in the back of the Palestine:
In Jordan because that the government is against forming a religious party & organizations, neither Shias or other groups don’t have any actual political power

The extremist movements ( that the western media & intellectuals call it “Islamist” ), from the “Moderate” current ( the modern and moderate current ), “Muslim Brotherhood”, to “Traditional Salafies” ( an old and conservatist current in Jordan) and “Terrorist Salafies” ( their idealogy is close to Khawarij & ISIL) and “Al-Tahrir” ( a current that is based on framework of Muʿtazila), etc… don’t have a unified indentity and they reject eachother both in theory and practice.

Also eacho of these currents have many difference & competitions within themselves so there hasn’t been any growth or coherence between them. Such chaos in these parties and groups, alongside the actions of King Abdullah II & foreign help, have caused that Jordan be safe from “Arab Spring” and “ISIL Insurgency”

3- Some important points about Jordan:
a) Abu Musab al-Zarqawi (Ahmad Fadeel al-Nazal al-Khalayleh), one of the leaders of Al-Qaeda (Iraq’s Branch), was the citizen of jordan, from the city of “Zarqa”.
Alongside his terrorist activities in Iraq, he took responsibility for the terrorist attack in a Hotel in Amman Governorate (November 9, 2005), which led to the death of 57 people and 115 injuries.

b) The Ma’an governorate in southern Jordan with the population of more than 100.0000, is filled with thousands of Salafi terrorists which most of them had military training and there is a high percentage of Unemployment in Ma’an. The Syrian & Iraqi refugees which fled war zones to Jordan, mostly migrated to this governorate.

c) Jordan is a dry & desert country, and is suffering from serious lack of fresh water, and throghout history the lack of water has been one of the main reasons for limited & great wars.

d) In recent years, there are so many cases of importing weapons on excuses like military exercise and maneuver. importing fighters like F16, F15 and also Apache helicopters and airdefense systems, etc…

The Jordan’s military organizations has a independent center, named “Kadbi”, which is under the supervision of king Abdullah. The responsibility of this organizations is wide research and development in different military and trade fields, establishing military military exhibit and exercises, training intelligence specialists , … in Jordan. ( and maybe the idea of creating terrorist groups against Islamic resistance was given to King Abdullah by this organization to bring it up in his meetings with Arab & western officials ).

The Jordanian military participate & cooperated in more than 50 war & international military operations around the world, including Afghanistan, Syria, Yemen, Darfur (Sudan) and etc… and its military has alot of experience and preparation, because of the financial supports.

e) The project of creating a security border for the Zionist regime in recent years, is being supplied by countries like Egypt and Jordan for southern and eastern borders ( Sinai Desert, according to the agreement between Egypt & Zionist regime is emptied of military forces). From north, However, because of the Hezbollah’s presence and now for recent tensions between Syria & Zionist regime, the security of the northern border is fragile.

The apparent and hidden role of Jordan in the region, specially in recent two decades, is interesting.
In one hand, Jordan, by following its so called “moderate” Politics and creating a secular & flexible society (in terms of accepting refugees from all countries and coexisting with different school of thoughts) is always trying to show itself as a peace-seeking, trans-racial and trans-faction country.

On the other hand for the sake of the Zionist regime, evacuation of West Bank & Gaza Strip by terrorist groups like ISIL is the best tactic, and what source is better than Jordan itself, which embraces refugees meanwhile among these refugees there are thousands of people with the history of working with ISIL and other terrorist groups, and can be funneled to West Bank in order to being their plan.

Best solution to counter this potential of theirs is arming the Palestinian resistance groups in West Bank & Gaza so that they be able to fight both Israel army and Terrorists at the same time. With regard to these matters about Jordan and its potential & threat, we can’t overlook the role of Jordan in the past, now and even future of the region.