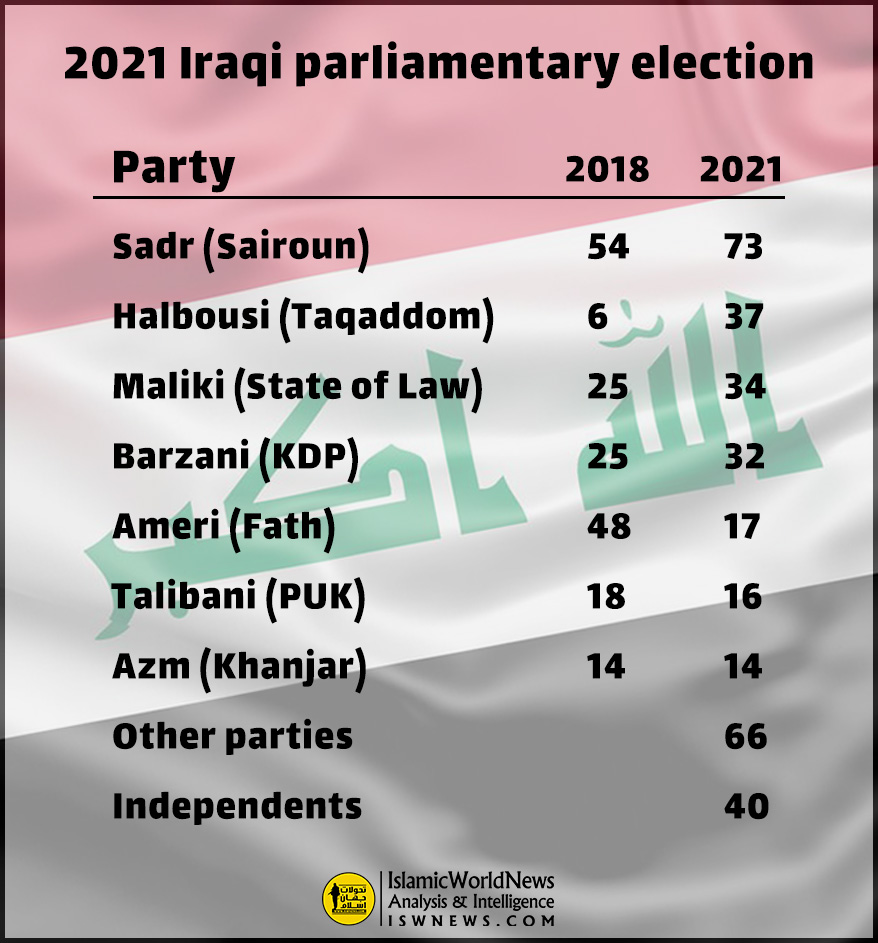 ISWNews Analysis Group: The final results of the Iraqi parliamentary election was announced by the High Electoral Commission. Muqtada al-Sadr topped the table with 73 seats.

The Iraqi High Electoral Commission has put the turnout of Iraqi citizens at 41 percent.

Based on the announced results, the parliamentary seats are distributed among the coalitions and political groups as follows:
1- Sadr faction led by “Muqtada al-Sadr” with 73 seats.
2- Taqaddom coalition led by “Mohammad Al-Halbousi” with 37 seats.
3- State of Law coalition led by “Nouri Al-Maliki” with 34 seats.
4- Democratic Party of Iraqi Kurdistan led by “Massoud Barzani” with 32 seats.
5- Al-Fatah coalition led by Hadi Al-Amiri with 17 seats.
6- Patriotic Union of Kurdistan Party headed by “Bafel Talabani” with 16 seats.
7- Azm coalition led by “Khamis Al-Khanjar” with 14 seats.

Other political groups are next in line, with independents holding 40 seats.

Given the success of the Sadr faction in the Iraqi parliamentary elections, some informed sources claimed that “Jafar Muhammad Baqir Sadr” nicknamed “Sayyid Jafar Sadr” will be the main option for the prime minister.

In the past few days, after the announcement of the preliminary results, the Al-Fatah Coalition, Asaeb Ahl al-Haq, State of Law and the Kataib Hezbollah protested against the election results and announced that they did not accept the announced results. It remains to be seen what the position of these groups will be in the face of the announced results.