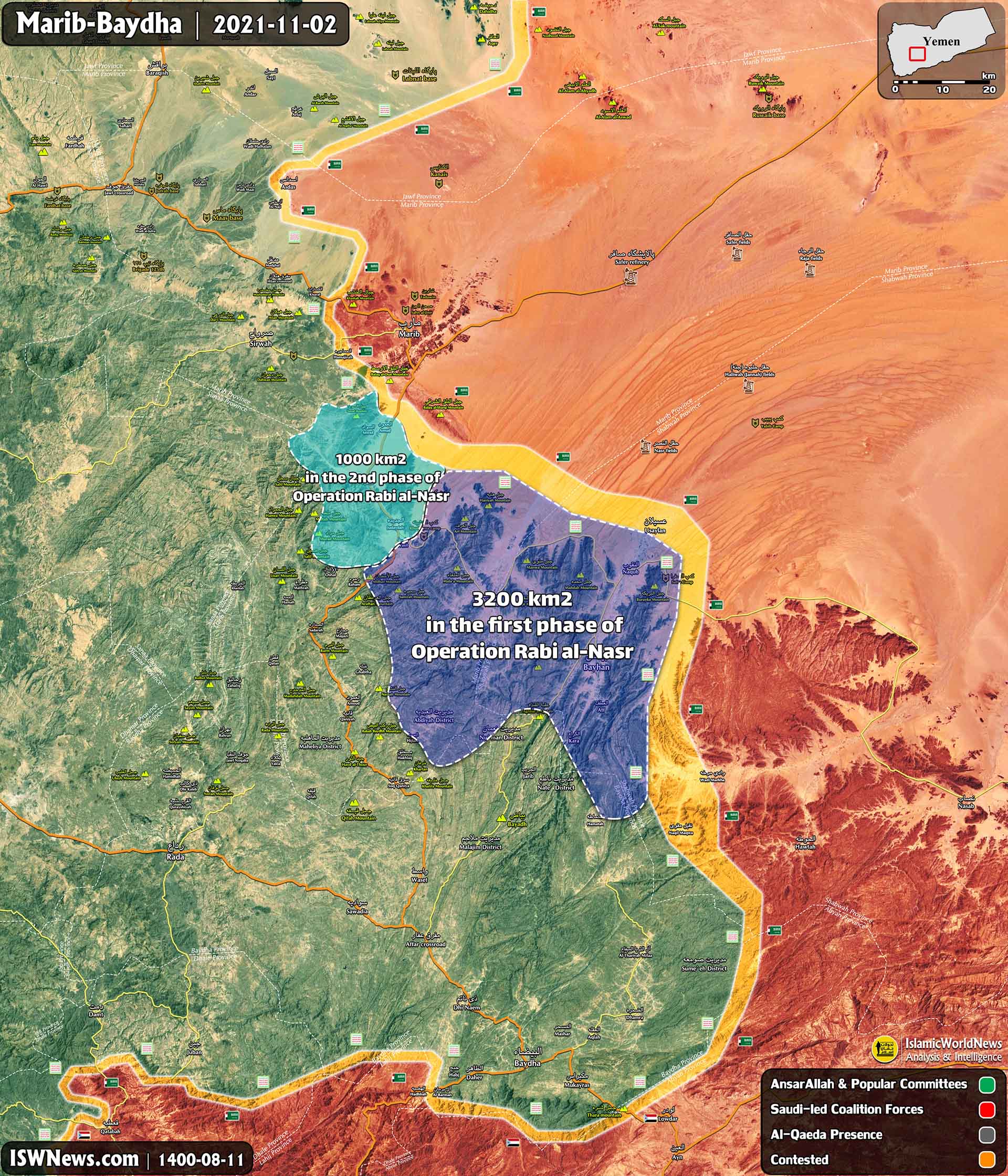 ISWNews Analysis Group: Ansar Allah and the popular committees liberated an area of nearly 1,000 square kilometers from the Saudi-led forces during the second phase of Operation Rabi al-Nasr in the southern province of Marib between October 17 and November 2.

“Our forces, with the support of the tribes, continue to operate to achieve the freedom and independence of the country.
Al-Juba and Jabal Murad districts in Ma’rib province with an area of ​​1,100 square kilometers were liberated in the second phase of Operation Rabi al-Nasr. Our forces have also liberated the Al-Amoud area and have taken up positions near the “Falaj” point at the entrance to the city of Marib.

The foreign enemies suffered a lot of damage, especially those who insisted on fighting, but those who left the war, our forces allowed them to leave.

Enemy warplanes carried out 159 airstrikes and could not stop the advance of our warriors.
In the second phase of Operation Rabi al-Nasr, our air defense systems managed to carry out 86 operations against enemy warplanes.
The missile force carried out 47 operations against enemy positions, 31 in the occupied territories and 16 deep in Saudi territory.
The Air Force has carried out 141 operations, including 128 operations in the occupied territories and 13 operations deep in Saudi territory.
During the second phase of Operation Rabi al-Nasr, more than 200 militants were killed and more than 550 were injured.

We are proud to record the prominent role of the elders and heroes of the free Marib tribes in liberating and securing their territories.
The free people of Jabal Murad district enjoyed an honorable position to accompany their country and people in the face of the aggressors and agents of Washington and Tel Aviv.

The armed forces warn the remaining mercenaries in Marib to react quickly to stop the clashes immediately. We will defend our people and our country if the hostility and aggression continue.

Addressing the Saudi regime, we say: We do not say that your war is just absurd, but it is a crime, aggression, humiliation, disgrace and also a defeat for you. The struggle of the free people is until independence, an inevitable struggle for freedom; This battle will not be postponed or changed.”

It should be noted that the first phase of Operation Rabi al-Nasr was carried out in the south of Marib province and the west of Shabwa province, which eventually led to the liberation of an area of ​​nearly 3,200 square kilometers from September 21 to October 17 from the occupation of Saudi-led forces. In the mentioned operation, the districts of Beyhan, Ain and parts of Usaylan in Shabwah province and Harib and Abdiyah and parts of Juba and Jabal Murad were liberated.

Therefore, so far, during the first and second phases of Operation Rabi al-Nasr, a total area of ​​nearly 4,200 kilometers has been liberated.