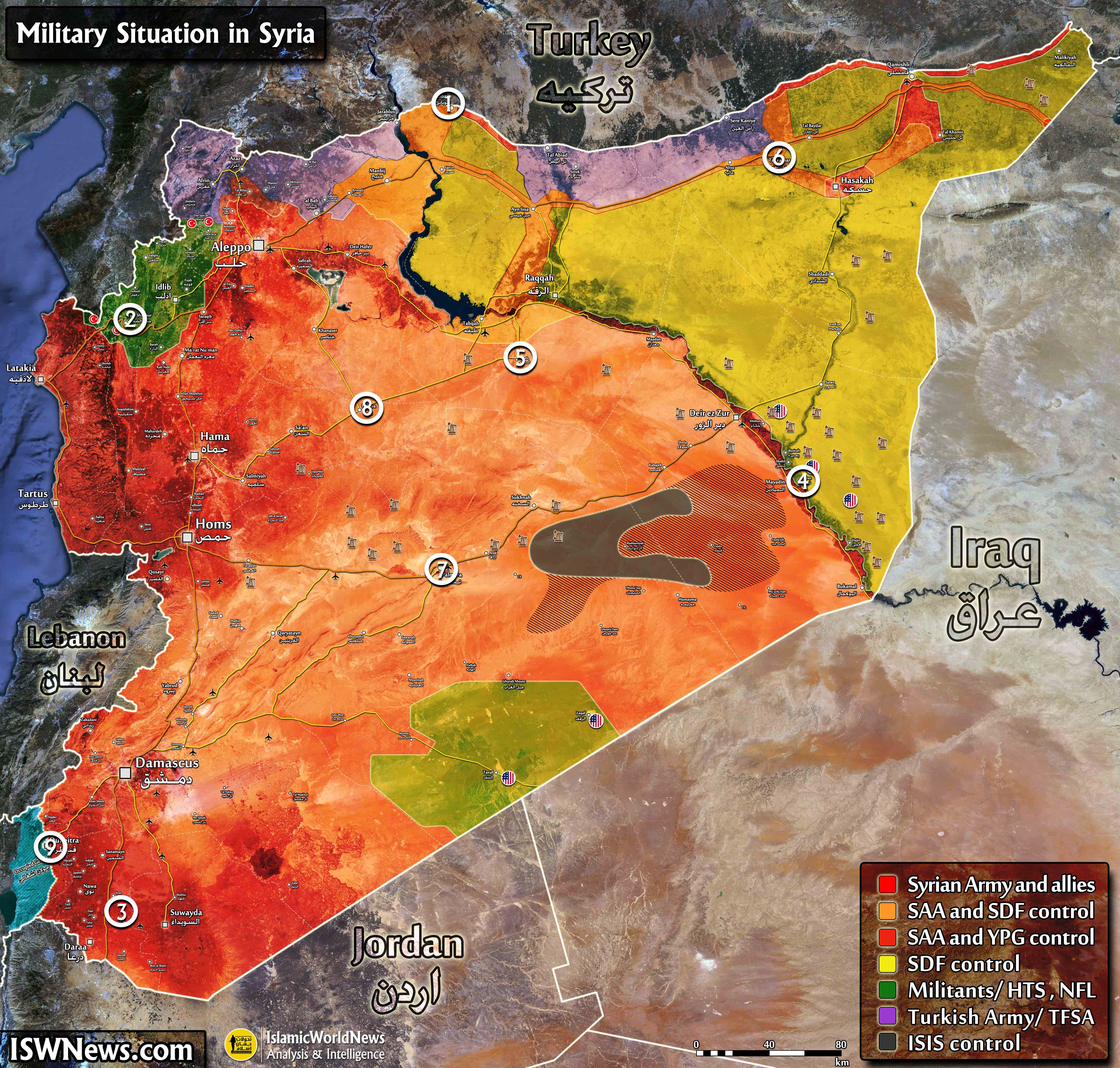 ISWNews Analysis Group: On November 5, the Israeli army announced that two suspects who had crossed the Syrian border in the Golan Heights were detained by Israeli forces.

1- Aleppo:
– On November 1, the 77th joint Russian-Turkish military patrol was carried out in the eastern suburbs of Ain al-Arab in northern Syria.
– On the evening of October 30, a Turkish military drone targeted a checkpoint belonging to the Syrian Democratic Forces (SDF) in the Al-Hamam area near the Qara Qozaq Bridge.
– The Ankara-backed Ahrar al-Sharqiya militants sent a logistics convoy to the eastern suburbs of Ain al-Arab.
– A military convoy of Syrian Army forces entered Minnagh Airbase in northern Aleppo and deployed in the area.
– On the morning of November 3, American helicopters carried out an airdrop operation to evacuate four ISIS members from the “Hourana” neighborhood in the city of Ras al-Ain.
– The Ankara-backed Faylaq al-Sham group abducted 14 Kurdish men and women from the village of Isko on the outskirts of Afrin and took them to an unknown location.

2- Idlib:
– Russian fighter jets attacked militant positions in the city of Jisr al-Shughur.
– On November 2, a military convoy of the Syrian army, including dozens of military vehicles, tanks and personnel carriers, entered the city of Saraqib.

3- Daraa:
– A Syrian soldier was killed and two other soldiers were wounded in an armed attack by unknown gunmen on a their vehice near Maliha Gharbi.
– Assassination of a former rebel by unknown gunmen in the Nahtah area.

4- Deir Ezzor:
A civilian was killed by unknown gunmen in the market of the city of Dhiban.

7- Homs:
On November 1, two Syrian army soldiers were killed at the entrance to the city of Tadmor, east of Homs, in an attack by ISIS operatives.

10- On the morning of November 3, the Israeli regime fired several missiles from the occupied north of Palestine, targeting the Zakia region on the outskirts of Damascus, causing material damage.

11- On November 5, the Israeli army announced that two suspects who had crossed the Syrian border in the Golan Heights were detained by Israeli forces.

12- According to the Russian Reconciliation Center in Syria, the militants violated the ceasefire six times in the Idlib region, of which 3 are in Aleppo province, 1 is in Latakia province and 2 are in Idlib province.