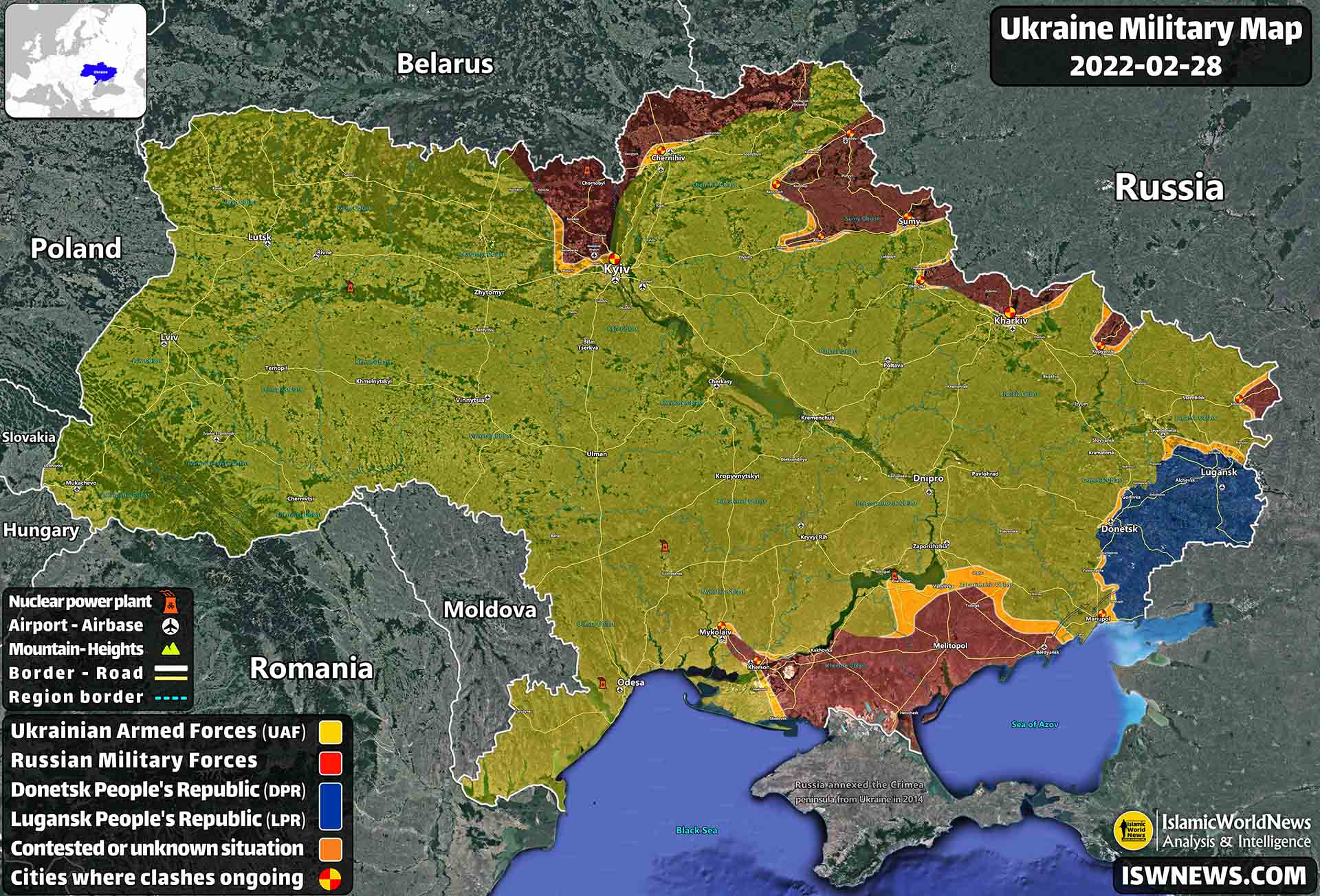 Review of the latest military changes in the north, east and south of Ukraine fronts until February 28.

On February 28, the Russian army took full control of the coastal city of Berdyansk. The next goal on this axis is to move towards the city of Mariupol and shake hands with the Russian and Donetsk People’s Republic (DPR) forces around Mariupol.

Now, only the city of Mariupol on the shores of the Sea of Azov is under the control of Ukrainian forces, and the capturing of this city by Russia and the DPR forces will cut off Ukraine’s connection with the Sea of Azov. In recent days, the DPR forces have been able to advance and capture some settlements between Volnovakha and Mariupol. Clashes continue around the town of Mariupol and along its northern road.

The situation in the city of Kherson and Mykolaiv is also unchanged.

On the Luhansk front, clashes continue between the Luhansk People’s Republic (LPR) forces and Ukrainian forces north of Schastia and south of Severodonetsk. However, there is no change in the field map of this area.

Northern front:
On February 28, Russian forces crossed into Borodyanka and reached Makariv. The purpose of advancing on this axis is to cut off the Zhytomyr-Kyiv route. In general, there has been no significant change in the field map of the area, and sporadic clashes continue between forces on the western and northwestern axes of Kyiv.

On February 28, the first round of talks between Russia and Ukraine took place in the Gomel region of southern Belarus. The talks lasted about five hours. Exact information is not available from the output of the negotiations; But it seems that more talks will take place in the near future.

Another important piece of news on the northern front is the Russian missile attack on the Brovary area near Kyiv. Russia attacked a military radar communications center in the Brovary region, 30 km east of Kyiv. Mayor of Brovary is said to have been injured in the attack.

Eastern front:
On the eastern front, clashes continue between Russian and Ukrainian forces in and around the cities of Kharkiv, Sumy, and Okhtyrka. Currently, the most intense clashes are in the city of Kharkiv. Ukrainian forces are resisting well in this city.
Kharkiv is the second largest city in Ukraine after Kyiv, and the keeping of this city is of great strategic importance to the Ukrainian army.

Read more:
Latest Military Situation in Ukraine, 27 February 2022 (Map Update)
What is happening in Ukraine? What is the story of the Russian military invasion of Ukraine?