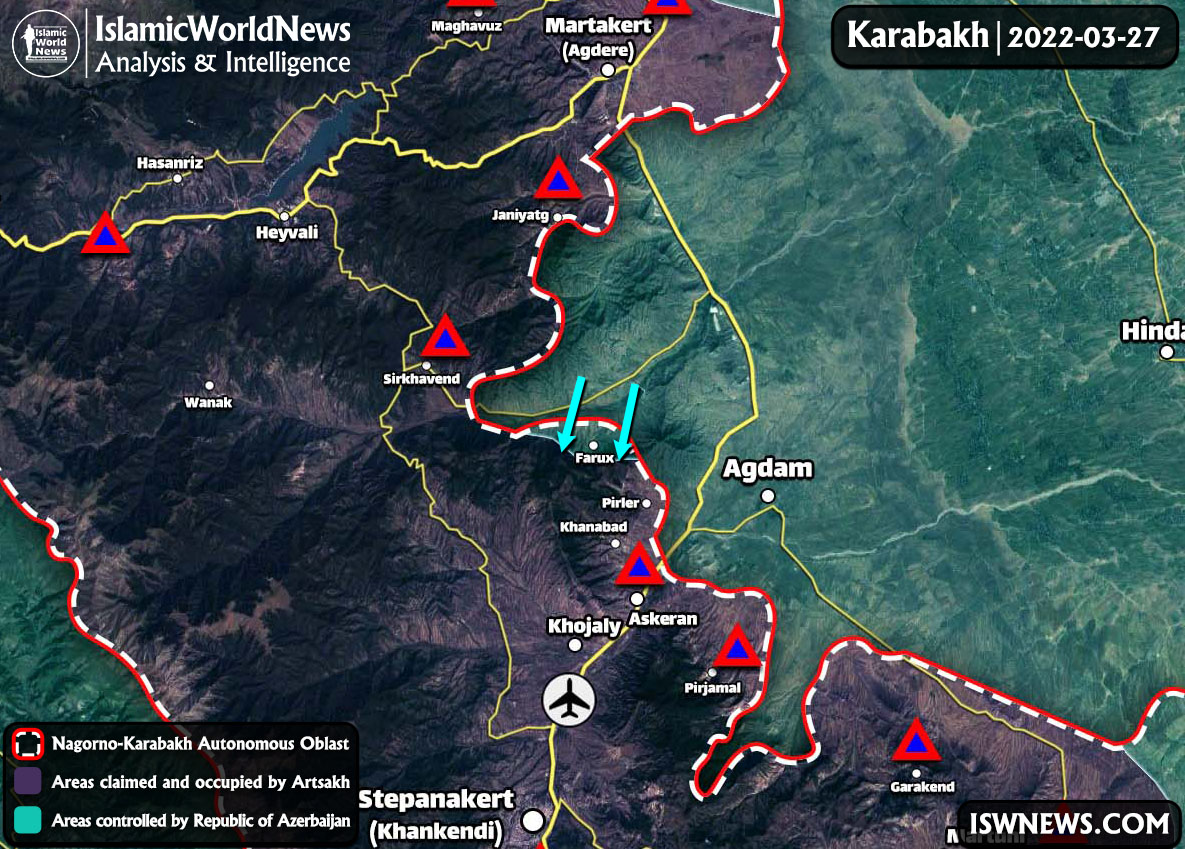 The situation in the Nagorno-Karabakh region continues to become more critical, and events in the region increase the likelihood of a new war.

Azerbaijan’s advance in the eastern part of Nagorno-Karabakh
The information headquarters of the de facto government of Artsakh (Nagorno-Karabakh) has announced the capture of the village of Parux (Farux) by the Azerbaijani army. Vartan Mikaelian the village head of Parux, on Thursday, March 24 stated that the village was captured without shooting and clashes at 16:00 local time by the Azerbaijani army: “The village was evacuated and no one was injured. We are now in a nearby village in Khramort (Pirlar) and they have taken control of the Karaglukh heights. Russian peacekeepers are negotiating with them.”

Intensification of tensions in Karabakh
According to Armenian sources, according to the November 10, 2020 agreement, the Armenian army must evacuate Karabakh. They were supposed to be replaced by the Russian peacekeepers, but the Azerbaijani forces advanced.
Davit Ghahramanian, a photographer for the Artsakh Information Center, published a photo in which he claimed that Russian peacekeepers and Armenian militias had blocked Azerbaijani troops and prevented the occupation of the Karaglukh heights.
Armenian Sputnik has published images of Russian peacekeepers carrying bulldozers to establish a military post in the Karaglukh highlands. Peacekeepers have called on both sides not to approach the post.

The Artsakh Information Office (Nagorno-Karabakh) has published images of the continued occupation of the village of Parux (Farux) and the presence of the Azerbaijani troops in the area.

The Armenian side said that three contract soldiers of the Artsakh army named David Mirzoyan, Ishkhan Ohanian and Ararat Tusian were killed and 14 others were wounded.

On March 26, people gathered in the city of Stepanakert and demanded the withdrawal of the Azerbaijani army, ensuring its security and reducing pressure.

The Azerbaijani Defense Ministry said in a statement, without elaborating on the incidents and any casualties: “Russian peacekeepers have released images of reconnaissance drones claiming that the Azerbaijani army has suffered casualties. Azerbaijani army units are stationed in their position and monitor the conditions of the operation.”

Karabakh gas was cut off again
“The Azerbaijani government cut off the pipeline again on March 21 after repairing the damage to the gas pipeline in the area of Shusha-Zariflu,” Armenian Sputnik quoted Armenian human rights activist Gogam Stepanian as saying. The temperature in Nagorno-Karabakh has dropped to -5 Celsius on some days after heavy snowfall again, and the cold has created many problems for residents.
However, the Azerigas stated that the natural gas supply to Stepanakert and other surrounding settlements will be restored on March 28.

Asking help from the Armenian all around the world
On his Facebook page, Metaxe Hakobyan a representative of the Artsakh Justice Party, called the intensification of pressure from the Azerbaijani government and the Armenian government’s indifference to the fate of Armenians living in the Nagorno-Karabakh as a crime against humanity. He called on Armenians around the world to help prevent power outages and military strikes in Azerbaijan.

Azerbaijan: Armenian army withdraws from Nagorno-Karabakh
The Ministry of Defense of Azerbaijan publishes the news about Nagorno-Karabakh in a vague and delayed manner. Among them is the meeting of General Karim Valiyev, Chief of Staff of the Azerbaijani Army, with the Deputy Commander of the Land Forces of the Russian Federation, which took place on March 22 in Baku.
The Ministry of Defense of Azerbaijan has announced that the meeting focused on the implementation of Russian peacekeeping operations in Nagorno-Karabakh and the implementation of Article 4 of the Tripartite Agreement of November 10, 2020 for the withdrawal of the remaining Armenian troops from Nagorno-Karabakh and other issues.

Armenian Ministry of Defense admitted about its defeats
The Armenian Ministry of Defense has been forced to admit and announce the occupation of part of Syunik province by the Azerbaijani army after media pressure and public opinion.
According to the statement, the Azerbaijani army advanced 600 meters east of the province (southern Armenia and bordering Iran) last spring and built trenches. But due to the cold winter weather, they evacuated the positions and returned with the arrival of spring. So actually there is no new aggression in this regard. There is also a height between the village of Narkin Hand Syunik and the positions occupied by Azerbaijan does not pose a threat to the people. One week ago, the Armenian section of Sputnik quoted local people as saying that the Azerbaijan advances had been made, but the Armenian Ministry of Defense denied it.

Search for missing Azerbaijani soldiers
The Ministry of Defense of Azerbaijan said after 20 days: “The search for two soldiers in Rayon Lachin continues.”
According to the statement of the Ministry of Defense, on Friday, March 4, two soldiers named Asgar Mohammaduv Farid Oglu and Ferdowsi Abdullahuv Mayes Oglu lost their way and have not returned yet. This announcement has no further explanation. Rayon Lachin Azerbaijan is a part of the Karabakh region (Upper Nagorno-Karabakh), which borders Armenia and the Lachin corridor passes through it.