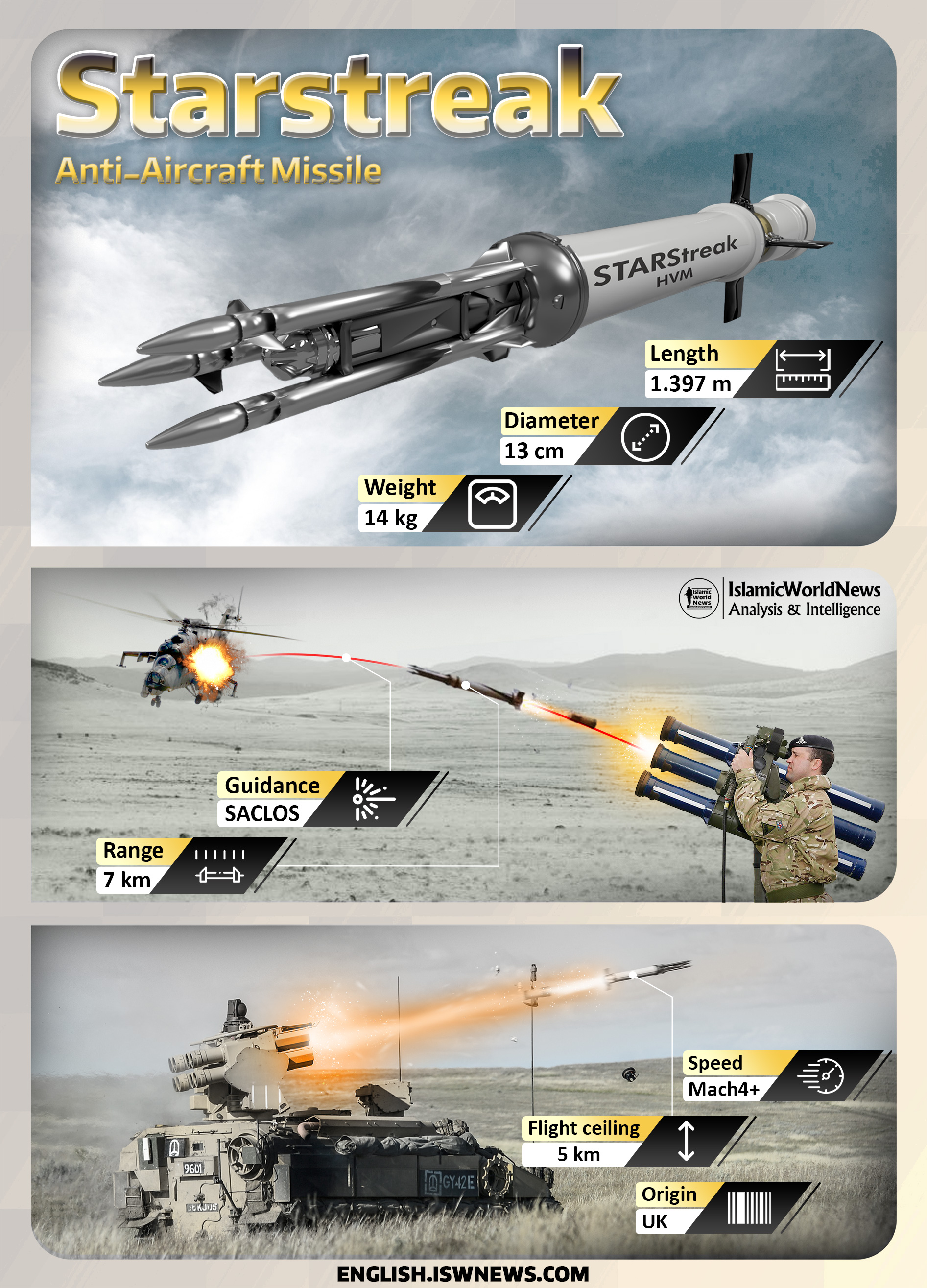 Starstreak is a British short-range surface to air missile that can be used as a man-portable air-defence system (MANPADS) or in heavier systems, it is manufactured by Thales Air Defence in Belfast, Northern Ireland. It is also known as Starstreak HVM (High Velocity Missile).

After STARStreak missile launch, the missile accelerates to more than Mach 4, making it the fastest short-range surface-to-air missile in existence. It then launches three laser beam-riding submunitions, increasing the likelihood of a successful hit on the target. The darts are guided to the target at a maximum distance of 1.5 meters from each other.

Starstreak has been in service with the British Army since 1997 And in 2012 Thales relaunched the system as ForceSHIELD.

The warhead of this missile consists of three darts. Each dart or submunition has 450 grams of PBX-98 explosive and the total weight of the darts is 900 grams. Each dart is 396 mm long and 22 mm in diameter. Each dart consists of a rotating fore-body, with two canard fins, attached to a non-rotating rear assembly with four fins. The rear assembly of each dart also houses the guidance electronics including a rearwards facing sensor.

The submunitions on this missile is made from a tungsten alloy; Because tungsten has a density about three times that of steel, which increases its kinetic energy and range and height, and the impact of its fragments on the body of the target aircraft is greater. The reason why tungsten fragments are most effective is the high hardness of tungsten-based alloys, which is very suitable for penetrating the aircraft body.

Delayed impact mechanism is used in darts. On impact with the target a delayed-action fuse is triggered, allowing the projectile to penetrate the target before the explosive warhead detonates. This activation mechanism is designed to fragment and maximise damage inside the target.

The first stage rocket motor has a very short burning time; this launches the missile from the tube but burns out before leaving the tube to protect the operator. This is to prevent damage to the operator due to the high speed and temperature of the exhaust gases. Four metres away from the operator, when the missile is at a safe distance, the second stage motor fires. This rapidly accelerates the missile to a burn-out velocity exceeding Mach 4. As the second stage burns out, three dart sub-munitions are released. The three sub-munitions have enough kinetic energy to manoeuvre to meet a target evading at 9 g at 7,000 metres.

In the new versions of this missile, the maximum effective firing range has been increased to more than 7 km and the maximum operating ceiling to 5 km.

Variants of STARStreak missile:
ATASK (Air To Air Starstreak) Variant: This type is made for shooting from a helicopter. This was developed in combination with McDonnell-Douglas and Lockheed-Martin electronics between 1995 and 1998 specifically for use with the AH-64 Apache. However, this type of missile has not yet entered service.

Lightweight Multiple Launcher (LML) Variant: The Lightweight Multiple Launcher can be mounted on a tripod as a fixed launcher or on a light vehicle such as a Land Rover or Humvee. This type holds three STARStreak missiles ready for firing. While STARStreak missiles are designed to target high-speed air targets, the LML adds the capability to defeat surface targets such as Light Armoured Vehicles, trucks and fixed installations, as well as aerial targets such as drones and helicopters. A very precise laser guidance system is also included in this system, which allows the operator to select target tracking modes manually or automatically.

RAPIDRanger Variant: RAPIDRanger is a lightweight, highly automated multi-missile launcher which can be fitted to most tracked and wheeled military vehicles. In this type, a four-round launcher is installed on various armored vehicles. RAPIDRanger can also be loaded with a range of missiles from Thales and other providers, adding the ability to attack ground targets such as armoured personnel carriers, static installations and platforms. The addition of an integral 360° surveillance sensor provides the RAPIDRanger with completely autonomous system operation for 24/7 force protection.

Seastreak Variant: Seastreak is a naval type of this missile. In this model, the CIWS (close-in weapon system), which includes 24 STARStreak missiles, is formatted in two blocks of 12 missiles. This system is used on warships to deal with short-range targets.

Self-propelled high-velocity missile (SP HVM) Variant: In this type, an eight-round launcher with internal storage for a further 8 missiles is mounted on the Alvis Stormer armored vehicle.