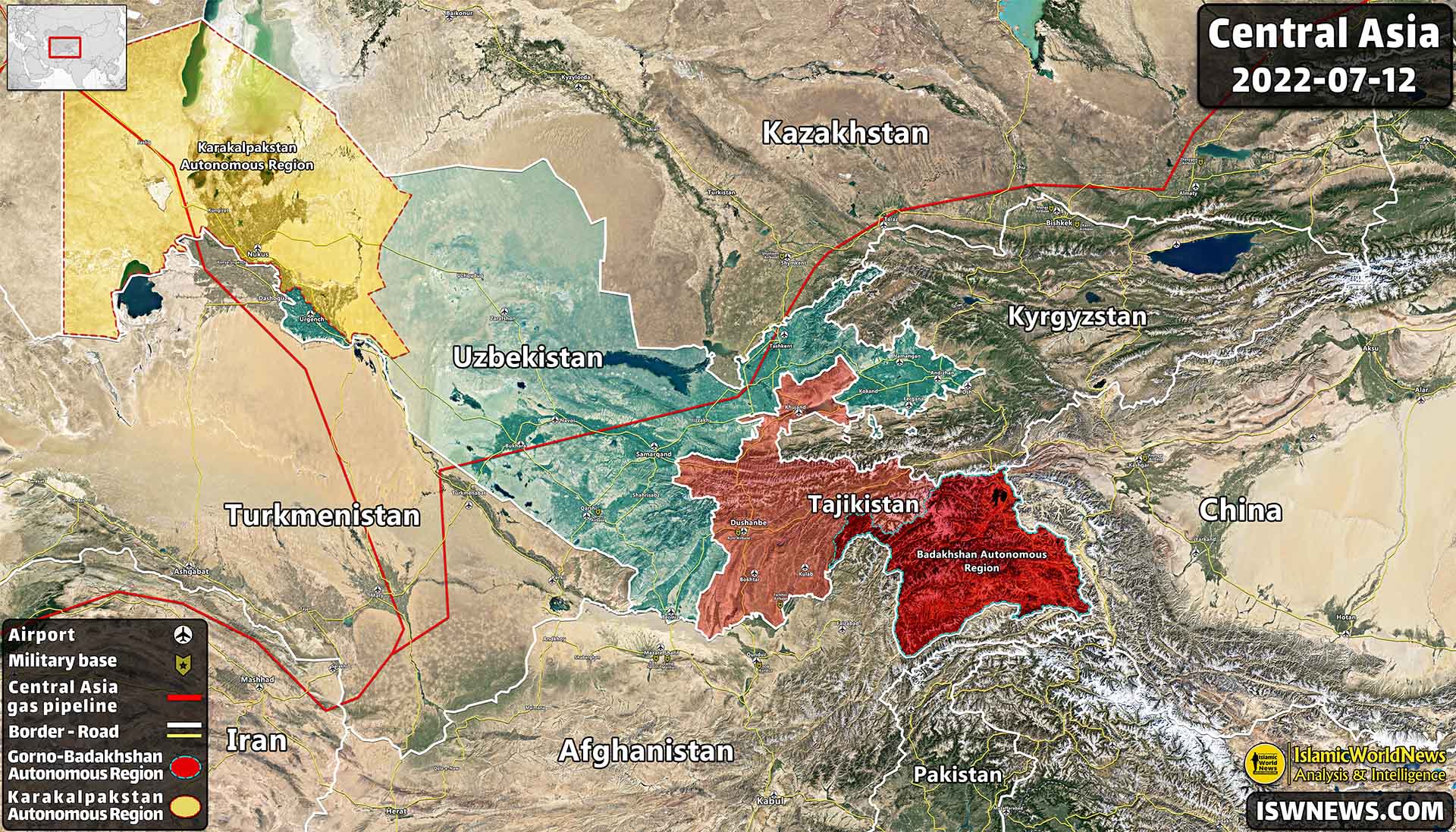 The continuation of protests in Kazakhstan, the economic and security crisis in Afghanistan, the suppression of popular protests in Badakhshan province of Tajikistan, the protests of the autonomous region of Karakalpakstan, and the high volume of sending military aid to the countries of the Central Asian region show the attention and competition of the western and eastern powers in this region.

During the last year, Central Asia has witnessed different crises, from street protests to military conflicts at different levels. Also, the activities of political movements and the military officials of various countries in the Central Asian region, especially the Americans, have increased the importance of this situation. The crises of this region can be defined as follows:

1- Afghanistan crisis and America’s effort to influence more in Central Asia:
After a year passed since the Taliban came to power in Afghanistan and also the withdrawal of the American forces from the country, a big security vacuum was created in the region and most of the Central Asian countries started their relations with the Taliban in limited condition.
But in the meantime, Tajikistan publicly supported Ahmad Massoud forces and rejected the general interaction with the Taliban government. This issue arises from a close relationship with America. In general, the goal of the Americans for the warm relationship with Tajikistan is to continue to be present in the Central Asian region so that they can firstly penetrate into the backyard of Russia, China and Iran and also continue to play a role in the Afghanistan developments. America was defeated by Pakistan’s negative response regarding the construction of the base and several other things at the beginning of this matter; But now with the HUMINT policy, support for non-governmental organizations (NGOs) as well as training and military and security assistance, it has increased its influence in Tajikistan.
One of the reasons for Putin’s recent visit to Tajikistan was the concern about the increase of American activities. In less than a month, three high-ranking American officials, Donald Lowe, Tom West, and General Michael Kurilla, had traveled to Tajikistan.

Rocket attacks by ISIS and unknown groups from Afghanistan to Tajikistan, Uzbekistan and Turkmenistan were also among the other events that happened in the last few months, and this issue cannot be analyzed until its dimensions are hidden.

2- Suppression of popular protests in Tajikistan’s Badakhshan:
Since 2012, the mountainous Badakhshan Autonomous Region of Tajikistan has been the source of popular protests and severe repressions by the government of Emomali Rahmon. This issue has intensified since November 2021 and its peak can be seen in the assassination of “Martyr Mohammad Baqer MohammadBaqerov”, one of the popular leaders of this region. Also, other local leaders have had a similar fate or have been arrested.

According to the latest field information, the government of Tajikistan seeks to suppress the popular groups in Badakhshan in order to apply its unified and autocratic rule in all of Tajikistan. With the opportunity of Russia’s war with Ukraine and simultaneous regional trips to Iran, Russia and Uzbekistan, “Rahmon” was able to complete his operations for ethnic cleansing in Badakhshan without any pressure. It should be noted that after this tension, the young fighters of Badakhshan either ran away or hid in the mountains, and the atmosphere of suffocation reigned over the city of Kharogh and other cities of Badakhshan province.

Karakalpakstan is a parliamentary republic, which has a national flag, official coat of arms, constitution and national anthem, and covers 37.1% of the territory of Uzbekistan. This region has rich resources and reserves of oil, gas and gold, and its population is about 2 million people, who are in the minority compared to the population of 35.3 million Uzbeks.

The separatist tendencies in this republic intensified when the government of Tashkent announced that it was preparing to approve a constitutional amendment, which will remove the sovereignty of the Karakalpaks over their region. On July 5, “Dauletmurat Tazhimuratov”, the leader of Karakalpaks, planned to hold a peaceful rally on this issue, but the situation became tense after his video call. After this, military equipment and counter-insurgency forces were deployed throughout the city of Nukus, the capital of Karakalpakstan and Tazhimuratov was arrested. Of course, the Uzbek government has backed off from changing the constitution and the situation has calmed down. In the last 10 years, the situation in Karakalpakstan has become the hottest topic in the media about Uzbekistan.

It should be noted that the authorities of Tashkent government have not renewed the autonomy agreement of Karakalpakstan since 2003 without polls and elections from the people of Karakalpakstan, and this led to start of these protests.

4- Protests in Kazakhstan:
What ignited the protests in Kazakhstan was the increase of fuel prices, but the demands of the protesters have now changed and they want to address broader issues. Kassym-Jomart Tokayev, the president of Kazakhstan, claims that these protests are organized by “terrorist groups” trained outside of Kazakhstan. The president of Kazakhstan declared a state of emergency following these protests across the country and promised to deal severely with the protesters. In a televised speech in the first hours of the protests, he said that he requested the help of the “Collective Security Treaty Organization” (CSTO) to establish stability in his country. Tokayev is the second leader of Kazakhstan after declaring independence from the Soviet Union in 1991. The election of Tokayev in 2019 was condemned by the Organization for Security and Cooperation in Europe (OSCE) on the pretext of not observing democratic standards in the elections.

The presence of CSTO forces in Kazakhstan to suppress protests was one of the notable points.

5- The military aid of the world powers to the countries of the Central Asian region:
During the past few months, significant military aid was provided to the countries of the region, most of which was directed to Tajikistan. The establishment of the Ababil 2 drone production line in Tajikistan with the presence of Major General Bagheri, the Commander of the General Staff of the Iranian Armed Forces, the visit of the head of US CENTCOM to Tajikistan and the announcement of US$60 million military aid to Tajikistan (Puma drone, the construction of border posts in the Chaldovar region in the south of Tajikistan, ranger and mountain warfare training to the Tajik military, as well as providing special border equipment to Tajikistan), equipping the Tajik army with Chinese weapons, Russia’s promise to support and equip the Tajik border guards, and the sale of Turkish drones to Kyrgyzstan have been part of these military deals.

Based on these developments, it can be concluded that Central Asia has always been in the spotlight due to its high importance, and due to the attention of the world’s military powers and the sending of military aid to this region, it is susceptible to important developments in the future. As Alexander Lukashenko, the President of Belarus, pointed out at the ceremony of the Independence Day of Belarus, Central Asia, like Eastern Europe, is located between two fronts and is a place where global poles clash. But the main issue today is not Ukraine, Belarus, grain and wheat exports, etc.
Rather, the main issue is the emergence of new, powerful players in the international arena who have challenged the unipolar structure of the world. Protests and color revolutions, the greater influence of America and China and in contrast to the decrease of Russian influence in Central Asia, the possible role of Iran, etc. are among the things that we will hear more about in the future.

ISWNews
ISWNews Analysis Group is a completely independent organization maintained by a team of experts and volunteers which focuses on armed conflicts and crises. Our mission is to tell the untold, which is usually censored by the main stream media. Step in battles of the region with us!
Share it:
Badakhshan Central Asia Chaldovar Dauletmurat Tazhimuratov Karakalpakstan Karakalpakstan Autonomous Region Mohammad Baqer MohammadBaqerov Tajikistan Uzbekistan