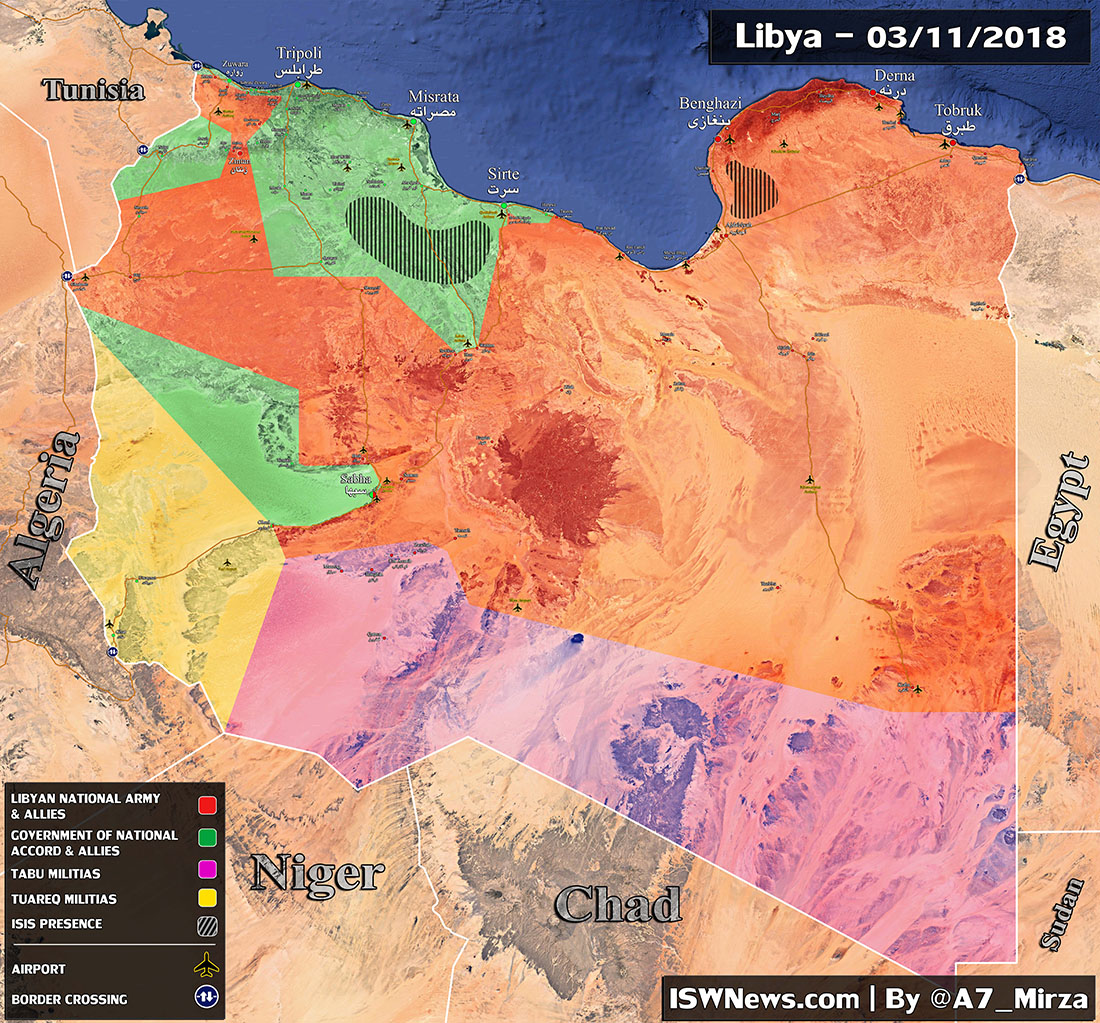 The second review of changes and currents involved in Libya, addressed the issues in a more detailed manner, to make you have a brighter view of the last state of this country.

The secret hand of western intelligence services in scheming chaos and reinforcing terrorism in North Africa; and also Libyans themselves stirring up ethnic and political disputes cause the Libya crisis still remain unsolved even in post-Gaddafi conditions.

According to Paris Agreement and Statement between field-marshal Haftar (the general of Libyan army) and Fayez al-Seraj (president of the Government of National Accord, GNA) and with the mediation of the French; December 10th 2018, was chosen for presidential and parliamentary election in Libya.

Tribes like Tuareg, Tabu, Amazighs, and … which have a significant role in the North Africa’s developments; are weak at maintaining stability with other tribes or governments and become suppressed by the armies of other countries of this region.

Also, through these disputes and instability of governments, Intellectual Salafi talent which has deep roots in Libya has this chance to find a hang-out in deserts, though it is not like Iraq and Syria.

In the previous issue, four currents were considered as the main currents:

The last situation of these four Categories is as below:

According to the last situation of the current which follows Haftar, this current expands its attacks to the center and the west of Libya after occupying the most of eastern regions of Libya by the support of foreign aids (U.A.E and Egypt).

Cities like Benghazi and Ajdabia which were under attacks of remaining of the radical groups, got under control, and Darnah –which was dominated by Shura Council of Mujahideen- was totally in possession of Haftar.

Field marshal Haftar in his last year trip to Russia, wanted the authorities to deploy forces and build military bases, but the Russians didn’t reach to an agreement with him.

Also, UAE wants to achieve results of what they wanted to invest in previous years, and didn’t have found any ally like Khalifa Haftar for that yet.

Haftar’s other ally, Saudi Arabia, did not have any military supportive role in Libya, and has mostly supported him [Haftar] because of his politics (more because his anti-Qatar manner).

2. Current which follows Government of National Accord, GNA (green color on the map)

This current which consists of different groups –from liberals to Salafies- has been involved in Tripoli’s conflicts till now. They think conqueror and the power-holder is the one who has control over the Capital.

When things going wrong, Liberals request Europeans for military and political support; and Salafies (closed to Muslim brotherhood) request for help from Qatar.

Libya Shield Force (based in northwest) usually do not resist against army (Haftar) and generally retreat when politicians reach to an agreement.

They usually have scattered struggles against Amazigh and other tribes. Tensions would subside with internal and external interference.

But in Tripoli, conflicts are heavier to maintain [their] political life and have more power. Libya Shield forces have had conflicts with ISIS-backed groups in Sirte, and in Sabratha have fought with groups which follow Al-Qaeda (in the form of internal conflicts).

Libya, like other Islamic countries, is a country of different tribes and ethnics.

Amazigh, Tabu, and Tuareg, all are from tribes which not only reside in Libya, but also are habitants of North Africa region. Theses tribes had been fighting with Gaddafi together with other tribes and now have control of their own regions, and generally try to make peace with Haftar and National Accord.

They join to conflicts in some places like Sabha (in the heart of Libya) just for save their lives.

In general, Tuareg leans toward the Government of National Accord (Green) and Tabu tribes lean toward Field Marshal Haftar (Red).

4. ISIS and terrorist groups (ISIS-occupied places on the map are shown by black hatching)

In the previous article, disestablishment of Ansar Al_Sharia (ISIS-affiliated) and weakening of Shura Council of Mujahideen in Libya, and presence of them in some cities like Benghazi and Darnah were discussed.

Following the clashes, rest of the Shura council of Mujahideen in Benghazi, lost the battle to the Haftar army and remainders retreated to the places under control of Government of National Accord, and acting as Benghazi defense brigade (their headquarters is in Jufra airport now).

ISIS too, is active in suburban areas around Benghazi, Ajdabiya and Sirte. But their activities have not gone further than disruptive attacks, bombings, and suicide operations.

Libya, unlike Syria and Iraq, does not have neighbors which help it retrieve stability and security. Otherwise, they are usually tied up in their knots.

But certainly, even Libyans themselves and also foreign countries are not interested in giving aid; Europeans have a bad experience of Afghanistan, Syria, and Iraq. They see Libya a swamp like them and then most of their support is limited to air strikes.

U.S.A, especially in Trump administration, puts up its policy on not interference its army into Libya, and instead, uses its regional alternatives.

Countries like Saudi Arabia, U.A.E, and Egypt do not have the strength to do anything; they are not as powerful as being a superpower.

There is no agreement about type of governing [political] system in Libya; and that is the main problem.

Liberals (most of national accord government), social nationalists (Haftar), Salafists (radical groups and those closed to Muslim Brotherhood an Al-Qaeda) and etc…, none of them are willing to accept election results or reach to an agreement on internal issues.

There is a doubt about Libya’s future: will this country become a safe place for ISIS and groups like that?! In that case, distance between ISIS and Europe will be less than 300 KM, and that is a very bad news for Europe! Or it would be a stable and safe country which would progress and saves itself by gas and oil revenues.

Anyway, the recent state of Libya is closed to the first possibility and in the most optimistic case, it is moving toward this process.

Anyway, we should wait till the due date for election to see if this election is a beginning of stability and security in Libya, or it would lead to a civil war for the third time like 2014.