Zarif: “Israel and US behavior is putting international law on the shelf” + Video 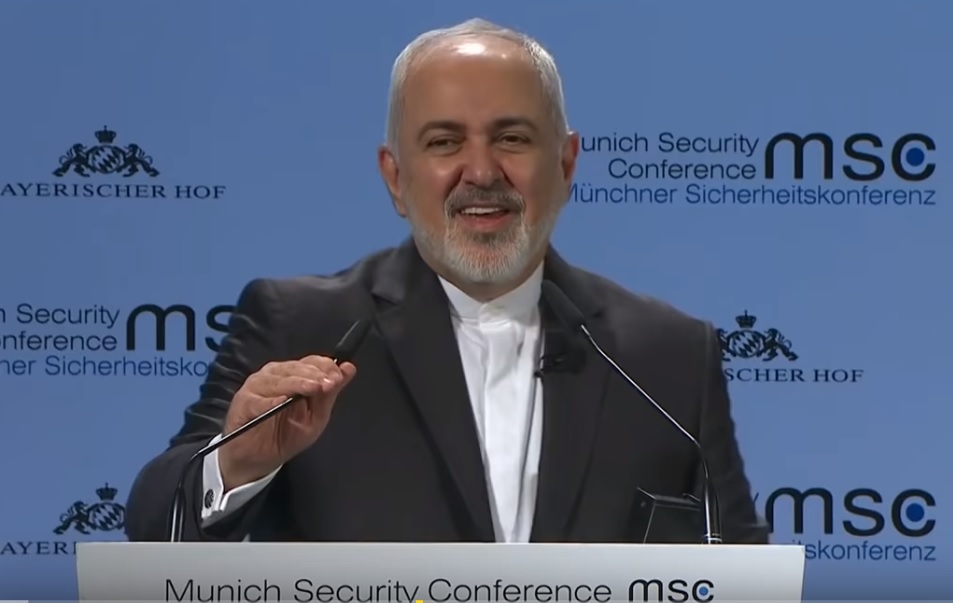 Islamic World News Analysis Group: Speaking in the 55th Munich Security Conference, Iranian foreign minister Javad Zarif blames Israel of violating international law after bombing campaigns in Syria, criticizes European powers for not calling out Israel and the US for their behavior in the region.

Iran’s Foreign Minister Mohammad Javad Zarif accused Israel of looking for war and warned that its behavior and that of the United States was increasing the chances of a clash in the region.

“The risk (of war) is great. The risk will be even greater if you continue to turn a blind eye to severe violations of international law,” he said.

Zarif said the U.S. had an “unhealthy” and “pathological obsession” with Iran and accused Pence of trying to bully his allies.

“All in the name of containing Iran, the U.S. claims, and some blindly parrot, that it is Iran that is interfering in the region, but has it been asked whose region?” Zarif said.

“Look at the map, the U.S. military has traveled 10,000 kilometers to dot all our borders with its bases. There is a joke that it is Iran that put itself in the middle of U.S. bases.”

Zarif, who said Iran was committed to the 2015 nuclear deal with world powers for now, also noted that France, Britain and Germany of not doing enough to ensure Tehran received the economic benefits of that accord.

What follows is the full text of Zarif’s speech at the MSC 2019:

In the name of God, the Compassionate, the Merciful

This past Monday, millions of Iranians gathered for mass rallies to mark the 40th anniversary of the Islamic revolution; an earthquake that collapsed a pillar of US domination in West Asia.

We’ve never been forgiven by the United States for having exercised our right to self-determination. As a result, we have long been the target of an unhealthy fixation—an obsession—which continues to this very day.

The demonization of my country has been a convenient cross for seven consecutive American presidents to bear—and a smokescreen for America’s regional clients to hide behind. It is long overdue for the United States to dismantle this malign institution, for it has today morphed into one of the greatest threats to even its own interests—and of course international peace and security.

In the past two years, the US has taken its animus towards Iran to a new extreme, as epitomized by its unlawful and unilateral abrogation of its commitments under the painstakingly-negotiated Joint Comprehensive Plan of Action, which was unanimously endorsed by the UN Security Council. To gain accomplices in its lawlessness, the US is now even labouring to force others to violate that Resolution, which explicitly calls for normalization of economic relations with Iran.

At the recent meeting of “the unwilling” and “the openly-coerced” in Warsaw, the US Vice President and the Secretary of State both blasted Europe for even attempting—albeit without much practical success—to abide by its obligations under the JCPOA and Security Council Resolution 2231. Yesterday – right here in Munich – Vice President Pence repeated this farce when he arrogantly demanded that Europe must join the US in breaking its commitments while undermining its own security. His hateful accusations against Iran—including his ignorant allegation of anti-Semitism against the heirs of a man described as ‘Messiah’ in the Torah for saving Jews – is both ridiculous and dangerous.

This malign obsession with Iran is imposing costs on others—and especially in our region, which has for 40 years suffered the consequences of US insistence on making wrong choices.

Driven by its pathological obsession with Iran, America has long encouraged reckless and destructive adventurism on the part of its clients: from arming Saddam Hussein in his attack against Iran to supporting the propagation of extremism; from aiding and abetting the ruining of Syria and bombing of innocents in Yemen to whitewashing the incarceration of a Prime Minister and dismemberment of a journalist. In parallel, the US has systematically shielded Israel’s constant aggression against Palestinians, while insulating its severe violations of the sovereignty of Lebanon and Syria.

And all in the name of “containing” Iran.

The US claims—and some blindly parrot its accusation—that it is Iran which is interfering in the region. But has it ever been asked whose region? Just glimpse at a map. The US military has travelled 10,000 kilometres to dot all our borders with bases. Meanwhile, it has milked the region of its resources through vast arms sales. According to the most conservative estimate, the GCC’s military spending alone will reach a record high of $100 billion this year—almost seven times that of Iran.

So, who is really exporting insecurity to our region?

What is it that threatens the region more?

The unfathomable arsenals used to terrorize the people of Yemen? Or Iran’s defensive missiles, which have only ever been used against ISIS terror in self-defence?

Is it Iran that threatens the annihilation of others—or is it Mr Netanyahu—Israel’s wolf-crier-in-chief—who openly threatens my country’s obliteration while standing next to his nuclear bomb factory?

No theatrics here—including the show put on by Vice President Pence—can obscure these realities.

Indeed, more and more nations are becoming explicit about the fact that the United States is now the single biggest source of destabilization in our neighbourhood. As we speak, Iraqi lawmakers are demanding the withdrawal of US forces from their land. And after more than 17 years of failure in Afghanistan, the US is now negotiating with the Taliban to withdraw the American military.

In contrast, our standing with the peoples of Iraq and Syria to counter terrorism has put ISIS on the verge of extinction, with both countries enjoying levels of peace and stability not seen in years.

I arrived here in Munich from Sochi, where President Rouhani continued his dialogue with his Russian and Turkish counterparts on how to further promote peace in Syria. Prior to that, I visited Lebanon and Iraq for 7 days of discussions with government officials, as well as with political, community and business leaders on how to work together to strengthen stability and advance mutual economic opportunity in our region.

But the reckless US obsession with Iran is threatening these hard-won victories.

On another front, Iran’s continued full implementation of the JCPOA—despite the US’ abrogation—has played a major role in decreasing tension and promoting regional and global stability. But Iran cannot foot the entire bill for vital global security achievements – whether it is the nuclear accord, or the combatting of drug and human trafficking to Europe.  Europe needs to invest too. Many around the world—and particularly on this content—speak eloquently about multilateralism. But they also need to walk the walk. For instance, INSTEX falls short of the commitments by the E3 to “save” the JCPOA. Europe needs to be willing to get wet if it wants to swim against the dangerous tide of US unilateralism.

While we have shown our desire for engagement, we don’t depend on others for our security, stability, prosperity and progress. We solely depend on our own people. That is why 40 years of so-called “maximum pressure”—namely demonization, war, sanctions and terror—including the heinous foreign-sponsored terrorist bombing in my country on Wednesday—has failed to “bring Iran to its knees”; nor has it affected our people’s decision-making calculus.

Iran’s foreign policy is designed to further the goal of creating a strong region that precludes the emergence of hegemonic aspirations by any power – regional or global.

A strong region simply means more confidence, more trade and more interaction between and among the countries in the region, than with external powers.

It requires home-grown political and territorial stability; reliance on the populace as the source of legitimacy, security and prosperity; harmonization of national identities and regional citizenship; participation of all in ensuring peace; and the exercising of strategic self-restraint.

In spite of all the ignorant hate-speech by American officials, let me remind you that we Iranians are proud to be the inheritors of a great civilization. The entirety of humanity is today riding in the same boat and we either sail together; or sink together. Our renowned poet, Sa’adi, testified to this truth over 900 years ago:

All human beings are members of one frame

Since all, at first, from the same essence came.

When time afflicts one limb with pain

The other limbs cannot at rest remain.

I thank you for your attention.