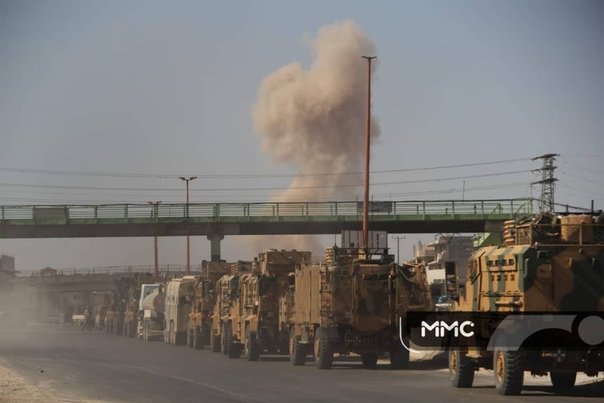 ISWNews Analysis Group: Today morning a Turkish military convoy of 28 military vehicles including 7 tanks and 6 bulldozers which was going to south of Idlib and Khan Sheikhun area was attacked by Syrian fighter jets in Haysh area.

In this attack, Mohammad Husein Wasem, a member of Faylaq Al Sham was killed and some others wounded. No Turkish troop was hit in this attack.
These activities by Turkish Army is taking place while the engagement between Syrian Army and terrorists have reached its climax since last night and Syrian Army could advance until near M5 highway in north of Khan Sheikhun.

After this incident, Syrian Foreign Ministry condemning severely Turkish military intervention in Syrian soil in a statement said, “This military convoy which transported weapons and ammos was going to Khan Sheikhun to help terrorists of al Nusrah Front and the aftermath of these adventures are point toward Turkey.”

After tensions getting high between Turkey and Syria in south of Idlib, from an hours ago Turkish fighters entered Syrian airspace and flying over Khan Sheikhun now.

Faylaq Al Sham member which killed in the incident.