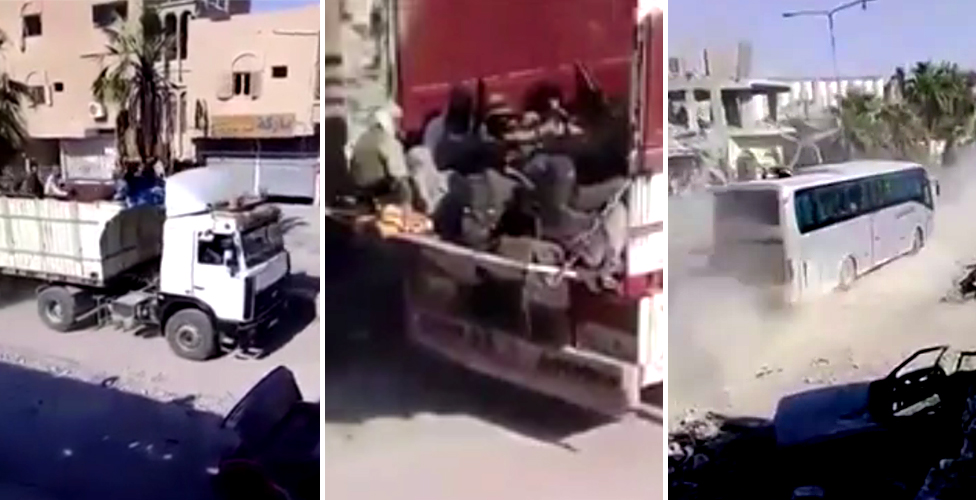 The revelations carried in a recent BBC report, concerning a deal that was struck between the US-led coalition that has been engaged in the battle to retake the Syrian city of Raqqa in recent months and the Daesh fighters occupying the city – a deal allowing hundreds of said fighters to be evacuated along with their families and weaponry – could not be more scandalous. More than opportunism, it exposes the oft-proclaimed commitment of Washington and its allies to destroying Daesh as hollow.

According to the BBC the deal “enabled many hundreds of IS [Daesh] fighters to escape…At the time, neither the US and British-led coalition, nor the SDF, which it backs, wanted to admit their part.” According to the personal testimony of some of the drivers employed to evacuate the fighters and their families out of Raqqa, “the convoy was six to seven kilometres long. It included almost 50 trucks,13 buses and more than 100 of the Islamic State group’s own vehicles.” We also learn that despite “an agreement to take only personal weapons, IS fighters took everything they could carry. Ten trucks were loaded with weapons and ammunition.”

No one should be in any doubt when it comes to the gravity of seriousness involved in allowing hundreds of Daesh fighters to escape and fan out across Syria with some, according to the BBC, making it across the border into Turkey. The burning question is whether the deal and subsequent evacuation was undertaken with the express purpose of diverting them to parts of Syria controlled by the Syrian Army and its allies?

What is certain is that it brings the US-led coalition into disrepute, confirming that it is part of the problem in Syria and wider region rather than any solution. When we add to this sordid picture the recent sentiments of US Secretary of State Rex Tillerson, asserting that there is no future for Assad in Syria, it is clear that regime change in Damascus remains Washington’s overarching objective.

When it comes to regime change in Syria, exactly who would benefit? Certainly not the Syrian people after the inordinate suffering and sacrifice they have endured in the process of first withstanding then defeating a concerted attempt to destroy the country and its non-sectarian character.

A dirty war has been waged in Syria these past six year not by Daesh, per say, but by the US, UK, and their Persian Gulf allies. Add to this motley crew Israel’s repeated violations of Syrian airspace and you identify an axis which constitutes a threat to human progress and development such as the world hasn’t seen since the Second World War.

As for the Syrian Kurds, fighting under the banner of the SDF (Syrian Democratic Forces), they now have a critical role to play when it comes to the trajectory the conflict takes upon the liberation of Raqqa. Indeed upon their next move will depend whether it will be accurate to describe the removal of Daesh from the city as liberation or whether it will be more akin to a re-occupation.

It has never been more important for the Kurds not to make the mistake of confusing self-determination with treachery. Their part in defeating Daesh has undoubtedly been a courageous one. However with this secret deal to allow hundreds of Daesh militants to leave the city with their weapons and ammunition, it is impossible to avoid pondering if they are now preparing for a post-Daesh confrontation with the Syrian Army, which has just liberated Deir Ezzor 145km southeast of Raqqa.

The point bears repeating: the presence of US military forces in Syria constitutes a clear violation of international law. It bears repeating when we have key US officials, such as Defense Secretary James Matthis, claiming UN sanction for this presence. As Russia Deputy Foreign Minister Gennady Gatilov pointed out in reponse to the US Defense Secretary’s false claim, “Syria is a sovereign independent state,” going on to remind Mr Matthis that “only the Syrian government can invite armed forces of third countries onto its territory. The UN has no such right,” he went on, before emphasizing that “the fight against terrorism does not give any states or coalitions a free hand to establish their presence on Syrian territory.”

There is no doubt, surveying the contours of this struggle in Syria, that driving it has been the ongoing attempt not only to destroy Syria’s sovereignty and independence, but to neuter Iran’s independence also. This is why Trump’s recent unhinged and uninformed bellicose statements, directed at Iran, should come as no surprise. What with the purge unleashed by crown Prince Mohammad bin Salman in the Riyadh recently, along with the detention and forced resignation of Lebanon’s Prime Minister Saad Hariri, though the battle for Syria draws to a close, the wider struggle between the axis of sectarianism and regime change – comprising Washington, Saudi Arabia, and Israel – and the axis of resistance to it – comprising Russia, Iran, Syria and Hezbollah .