Opinion: Iraq Caught Up in Cognitive Warfare; What Can Be Done 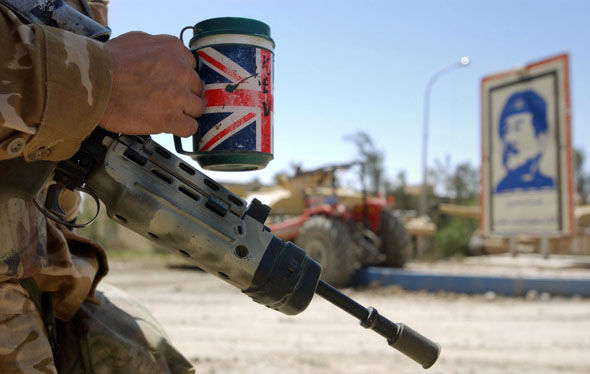 What Iraq suffering today is rooted in the transformation of people’s intellectual foundations, which they have long engaged in a new kind of war that aims to change the power of people’s understanding. Cognitive warfare is the West’s most important approach to destroying the axis of resistance, and of course, it’s the least expensive, but what is this warfare, and what is the counter-strategy?

The crisis in Iraq and some similar countries have been triggered by years of British-based media activity on the culture and politics of West Asian countries, with few results now to be seen; however, the worse part is that the posterity will suffer.

What emerges in the minds of individuals in the community about important issues is the perception or understanding that the cultural sections of intelligence agencies in the Western world are trying to manage the opinions of the people of each country through cultural programs and the global media. This is a British method whose extensive description requires separate research.

We have to take things in to account from a multitude of perspectives:
The US occupation of Iraq, the deadly sanctions and the humiliating “oil for food” program that the United States has been subjected to, British divisions over the past two hundred years, and the foundation of ISIS with the design of Israel and the economical support of Saudi Arabia and the US management are facts that Iraqi people, especially the Shias in the south, are simply forgotten. Even the anti-Shia Ba’athist regime has been forgotten too.
They ignore Americans who have official and evident influence in Iraqi ministries, which control the economy, especially the central bank, and then they set Iranian consulate on fire and chant slogans against Popular Mobilization Forces (Al-Ḥashd Ash-Shaʿbī) who defended the people against ISIS. But how this transformation has been possible in the memory of a nation.

Mechanism of cognitive warfare:
The inner layers of this warfare are not in the streets of Najaf, Karbala, or Baghdad, but it should be searched in the think tanks of politicians who are on the British axis. Unlike the United States, Britain is well-versed in Islam and Shia and has many connections with some Shia leaders and clerics, we are able to achieve this, and so we can enjoy it by having the clergy and the clergy. Whether before Saddam or after him. Basically, prior to the Iraq occupation and even before the destruction of the oppressive Ottoman rule, Britain studied Islam and the Shia religion and communicated with some Shia clerics. The design of the Arab countries was based on this. The emergence of British rule in the repression of the Thorat Al-Ashrin uprising (Anti-British revolution, 1920) and creating London-affiliated governments that looked like the British opposition on the face of it like Saddam is observable throughout the 20th century. The shock that the London court received from Mirza Shirazi in the tobacco boycott led them to institute false clerics and even fabricated religions such as the Baha’is.

Two centuries have passed since the “Divide and Conquer” tactics of the British, they have been updating this policy every decade, then sparking off new crises.

The British are well aware that the two elements of the inefficiency of government and false propaganda can be good triggers in any society. On the one hand, they prevent the government of Baghdad from serving the people to increase poverty; on the other hand, they attribute this situation to the Islamic Revolution and Iran by showing a few simple symbols of them. Since a year ago, the BBC’s British network concentrate its efforts to portray Iran as an enemy of the Iraqi people.

For example, the eight-year war, which was the product of British design and the implementation of the Ba’athist regime, resonates in the minds of the young Iraqi audience as the Iranian nation was that had attacked the oppressed Saddam. As a result, the audience reached the inductive analysis that it was the Iranians who had shed the blood of Iraqis for eight years. Or attribute the infrastructures that Britain itself destroyed in the Kuwaiti war to Iran. This is just one way of managing the perception of the Iraqi people.

The neglect of the main Shia factions who fought for years with Saddam in the eight-year war, the Sha’aban uprising (intifada), and afterward have caused the new Iraqi generations to have no right picture of the Ba’athist regime, the Wahhabism and the British occupation, and, on the contrary, images are instilled in them to show Iran as an enemy and oppressive. It is where Saddam’s actions are shown justified. Recall that Saddam expelled Iranian scholars and merchants at the start of his administration and later during the suppression of the Shia uprising in the year 1991, invaded the house of Supreme Ayatollah Khu’i’s, and more disastrous the barrage of Imam Ali (AS) shrine and entered the area between shrines in Karbala with tanks. These images are now completely erased in the memory of the Iraqi people. So mentioning those pictures revealing the British role and is an important step.

Over the last 20 years since the US occupation of Iraq, these images have faded, but what is being promoted is Iran phobia that, unfortunately, no action will be taken against it. Worse still, some are repeating the same cognitive warfare tricks unconsciously or biased in Iran as if Iran has taken Iraq under its control.

In fact, all of Iraq’s economy is under control of the US, and they are hampering the solution of problems and the growth of production and employment there. Two decades past and the United States has prevented the construction of power plants in southern Iraq. It has even prevented Iran from building a power plant free of charge for Najaf, but this news has never been heard by the Iraqi and Iranian people. The cognitive warfare exploits this neglect of the people and the slumber of the resistance axis precisely.

What can be done?
Iran and Iraq may not have enough tools to deal with the West, but there is a significant weakness in cognitive warfare, which is a strong dependence on Britain. The British, not in the form of a friend, but should be literally recognized as the most dangerous inhumane regime in the world.
When London receives severe damage from the countries of the region, it will undoubtedly fall back quickly. Cognitive warfare is directed neither in the US nor in Saudi Arabia but London. Israel, America, and Al Saud are indeed enemies of Islam and humanity. Still, all their actions in Iraq, Lebanon, and even the Yemeni War are based solely on the careful planning of Britain.

The only colonial government that has both a good knowledge of Shia and a deep connection between Whether an obvious connection like the British Shia and the Shirazi sect or some secret contact with some Iraqi officials, etc.

If the people of Iraq, Lebanon, Turkey, the United Arab Emirates, and others want peace, friendship, and prosperity, there is only one quick and effective way to annihilate the British economic interest in West Asia and the eradication of all those affiliated with Britain.

Note that a sign of dependence on Britain can be found in the residence and life of relatives and children of the political or cultural officials of the countries in Britain. People in the UK or its colonies (Canada and Australia) are being trained to play a role in the future, and they are kind of hostages taken from their fathers in the Muslim world.

Anyone looking to Britain in some way or another will be the same as the cognitive warfare of England. There is no other way to repel the West’s invasion and win the cognitive war, then to achieve economic prosperity and social justice, unless opposing seriously with British policies In Iraq and all Islamic countries.