Why is Iraq incapable against US? 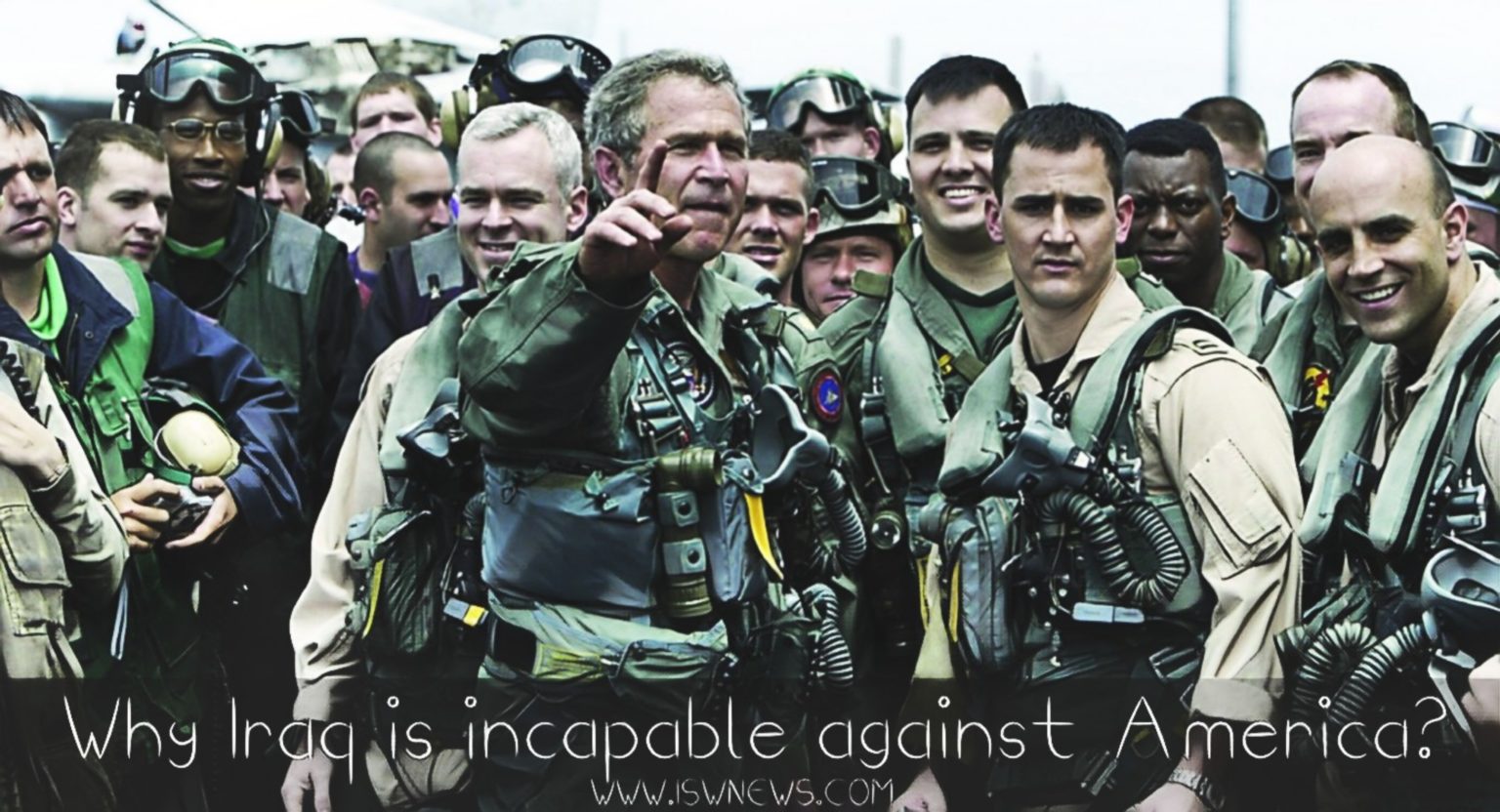 Disappointing expressions and behaviors of Iraqi politicians and leaders shows their deep weakness against US. Their reaction to US recent attack to Hashad Sha’abi shows that those tongues, which were shouting “reject Iranians and Quds Corp from Iraq”, are now shut up about USA!

What was the Iraqis decisions and reactions?
In general and optimistically Iraqis have concluded to reject USA. They say if we can’t find a political way to do it, we choose resistance.
The three powers of Iraq have agreed to politically stop violation of Iraq’s sovereignty. The process started by calling the US ambassador in Baghdad and official protests and continued by other countries invitation to put pressure on USA and ask resistance groups for prudence.
They claim that they have agreed with Hashad Sha’abi to not use military response to USA attack.

In the parliament two coalitions Fath and Saerun are preparing a bill to challenge the strategic tie with USA and exiting international coalition from Iraq. According to the treaty between USA and Iraq, either side can leave the treaty one year after announcing the intent to leave.

Marja only decried the incident and asked the government not to let Iraq to become a battlefield and foreign interferences. In fact Marja holds Iraqi government responsible.

What does Muqtada Sadr say?
Muqtada Sadr in his recent statement again looking from top to bottom condemning the regional engagements and transforming Iraq into a battlefield said: If we had chosen resistance to exit the occupiers and did not sign that shameful treaty, they wouldn’t collapse on Iraq like this. Today I am ready to reject the occupier by political means, is there anyone helping me?
Yes, Sadr again uses this incident for his own benefits similar to previous incidents such as protests, election, resignation, etc. Unfortunately in the chaotic society of Iraq those words and stances are more interesting than taking actions.

What does Kata’ib Hezbollah do?
A few hours after USA attack the news of firing four rockets toward Taji base, north of Baghdad and abducting an American reporter were released, however complementary news were not broadcasted.
Kata’ib Hezbollah’s statement contained how to react to USA attack or how much they suffered but considering Sadr’s blame on their so called arbitrary actions or Marja’s lack of mandate on answering, it is unlikely they do anything.
Unless they get the permission from leader of resistance or their answer is not in the military field.

Why is Iraq incapable against USA?
US occupancy, oil exploitation, Kurdistan separation challenge, high rate of illiteracy, vast corruption among politicians and the most important, lack of understanding the enemy are the reasons of incapability and weakness of Iraq.
Now why don’t Iraqis, from bottom to top, react to brutal killing of those who saved them from ISIS terrorist voluntary and devotional? The reason is explained 1,400 years ago:
“Those who sleep when they should help their leader, will get up by enemy’s kick.”
Saying by Imam Ali

Share it:
Iraq Iraq News ISWNews Kata'ib Hezbollah Marja US US Coalition US in Iraq Why is Iraq incapable against US?