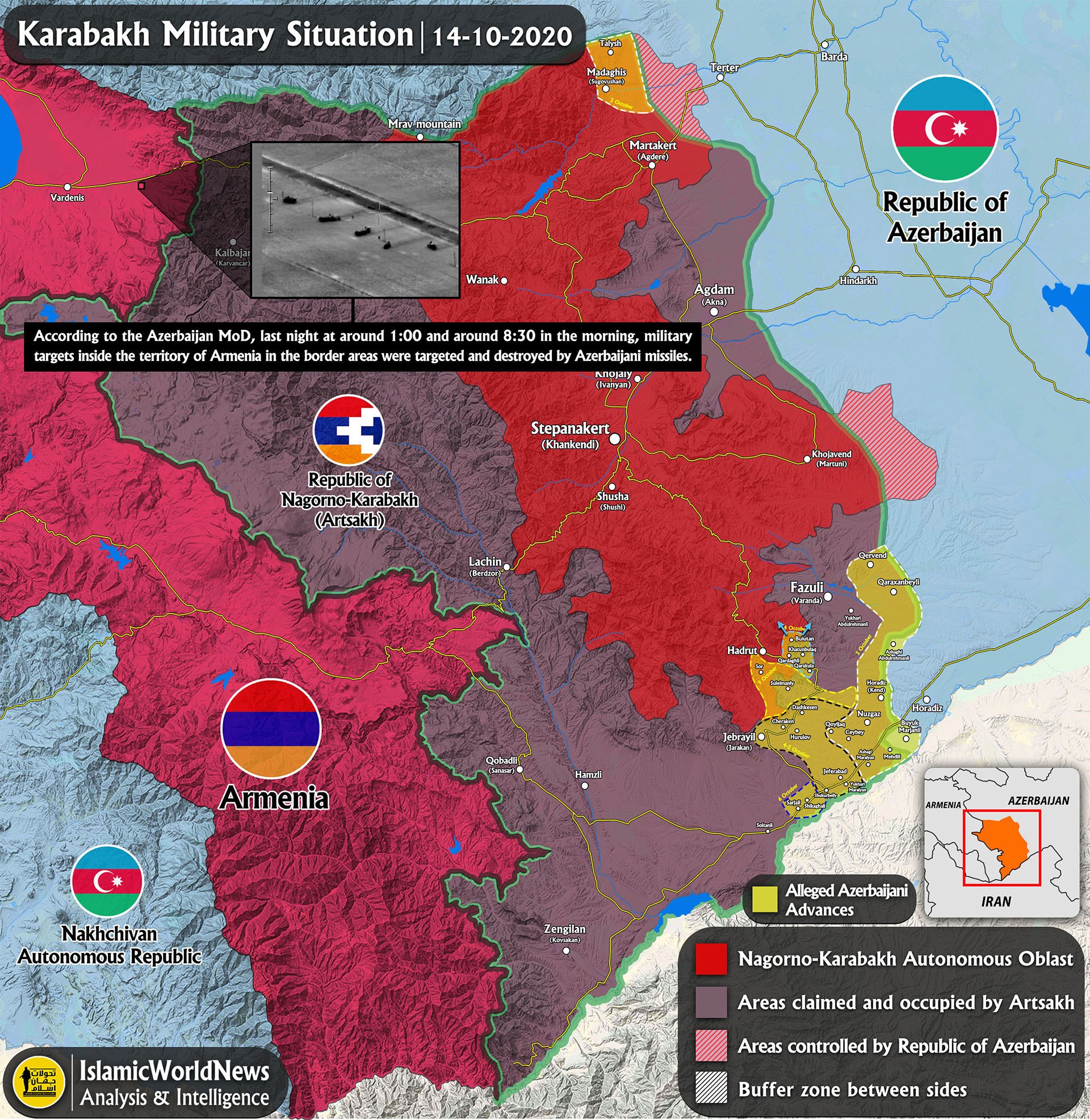 ISWNews Analysis Group: The Ministry of Defense of Azerbaijan announced in a statement the pre-emptive missile attack against military targets inside Armenia.

– The first official attack of Azerbaijan on the territory of Armenia.
According to Azerbaijan Ministry of Defense statement, last night at around 1:00 and in the morning around 8:30, some military targets near Azerbaijan border were attacked by Azerbaijan missiles and we’re destroyed. Azerbaijan stated that Armenian forces near the Kalbajar (Karvanchar) region were preparing for an attack with “Elbrus” ballistic missiles against Azerbaijan when the Azerbaijani artillery in a preventive attack, destroyed their equipment. On the other hand, the Armenian Ministry of Defense denied Azerbaijan’s claim that the equipment was prepared for a missile attack on Azerbaijani cities.

This is the first time that Azerbaijan has officially invaded Armenian territory, and this could provide an excuse for Armenia to force Russia to enter the Nagorno-Karabakh conflict, according to the CSTO security pact. Earlier, Vladimir Putin said that Armenia has not been invaded so far and that according to the Russian-Armenian security agreement, Russia will be able to defend Armenia whenever a foreign country invades Armenian territory.
Following the attack, Russian Foreign Minister Sergei Lavrov said they were examining the dimensions of the issue.

– The Azerbaijan Ministry of Defense released a video of the alleged Elbrus ballistic missile systems, that were destroyed near border of Armenia. The footages show the systems before being destroyed. According to the published video, contrary to the information provided by Azerbaijan MoD, it seems the mentioned systems are in fact Chinese WM-80 MRL rocket launchers purchased by Armenia from China.

– Azerbaijani President Ilham Aliyev tweeted about the new advance of Azerbaijani forces near Hadrut between the borders of Khojavand and Fuzuli districts. According to the information provided, the villages of Qardaghli, Khatunbulaq, Qarakula, Bulutan, Malekjanli, Kamartuk and Teke came under the control of Azerbaijani forces.

– Azerbaijani forces shot down an Armenian drone in the Fuzuli region.

– According to Western sources, the bodies of 52 Syrian mercenaries killed in the battles of Nagorno-Karabakh were returned to Syria by Turkey.

– The Ministry of Defense of the Republic of Nagorno-Karabakh (Artsakh) has released the names of 23 other Armenian soldiers who lost their lives in the Nagorno-Karabakh war. According to this information, the official death toll of the Armenian forces reached 555 people.