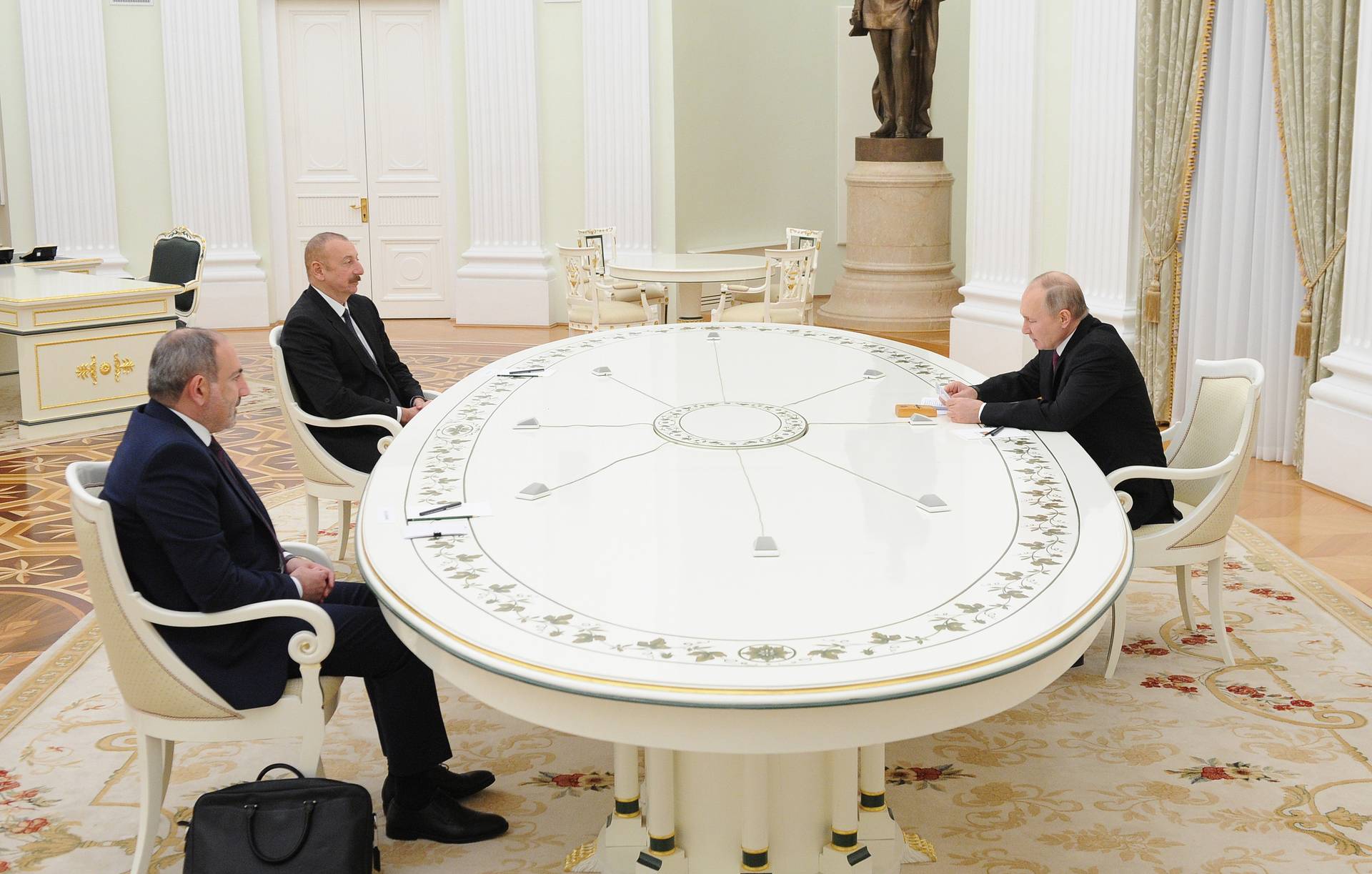 It was an interesting meeting specially after a 44 days war, in which more than six thousand people killed in Karabakh and then Aliyev and Pashinyan met like two good boys with their boss Putin and listened to him.

Following this four hours meeting, three countries unveiled a joint statement to create a list of joint projects to open the borders. There are not much details regarding the new agreement but it is in the same direction as the previous Karabakh ceasefire agreement.

Pashinyan spokesperson said before the meeting that important projects already are being investigated and talked over, one of which is to permit Armenia to cross Nakhchivan and transit to Iran, as well as using the railroad built in USSR era which was used to connect Yerevan to the southern regions of Armenia.

According to this trilateral agreement, each country forms a committee of specialists led by the vice PMs to make a list of joint projects for the leaders of the countries.

Russian paper Kommersant released a railroad map of Caucasus two days ago, which was the same railroad built in USSR era and was closed since the first Karabakh war in 1990. It is going to be open with the new agreement.

This railroad will connect Armenia to Russia through Azerbaijan and will be used for transit to Iran as well. On the other hand Azerbaijan will connect to Nakhchivan area and Turkey through Armenia.

Russia and Turkey undoubtedly will get the most of it. Russia restored its hegemony after a 30 years period of weak presence in the area and Turkey as a new player in the Karabakh, has greatly strengthened its foothold in the region and will strengthen its ties with Central Asian countries by connecting the Caspian Sea; Azerbaijan, while regaining its vast occupied territories in the south of Karabakh, was directly connected to the Nakhchivan region and of course to Turkey, and largely overcame the previous problems; Armenia will also benefit from direct connection to Russia and better connection to Iran, and by opening its western border with Turkey will benefit from trades with this country too. And finally, Iran, as the civilization and cultural owner of the Karabakh region, will have the least benefit from the events in Karabakh and the reopening of a new transit route; and Iran political and economic influence in the Karabakh region will be greatly reduced.

ISWNews
ISWNews Analysis Group is a completely independent organization maintained by a team of experts and volunteers which focuses on armed conflicts and crises. Our mission is to tell the untold, which is usually censored by the main stream media. Step in battles of the region with us!
Share it:
Armenia Azerbaijan Ilham Aliyev Karabakh Nikol Pashinyan Russia in Karabakh Turkey in Azerbaijan Vladimir Putin