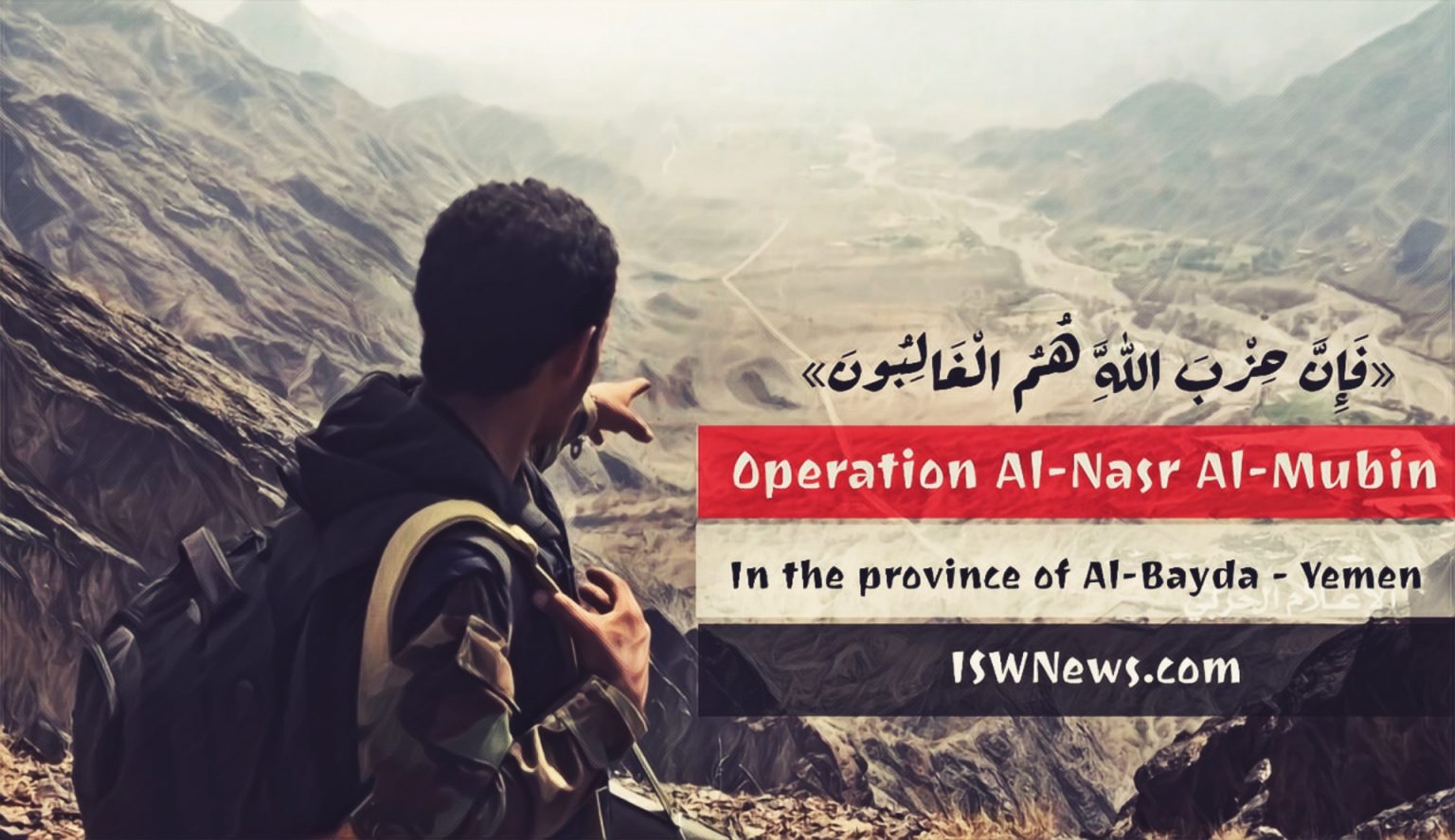 Brigadier General Yahya al-Sari’ said in this press conference:
“The second phase of Operation Al-Nasr al-Mobin led to the liberation of Nate’ and Nu’man administrations, as well as the infliction of heavy losses and the expulsion of takfiri elements associated with the coalition of enemies.
Various quantities of weapons have been captured, and also large numbers of enemy mercenaries and takfiri groups have been captured, killed and wounded.
Our forces are completely clearing Al-Bayda province of Takfiris.
The operation, with the help of God Almighty, will continue until the end of the aggression, the lifting of the siege and the liberation of all the lands of the Republic of Yemen.”

The details of the second phase of Operation Al-Nasr Al-Mobin are as follows:

The second phase of Operation Al-Nasr al-Mubin began on July 20 and lasted several days.
All the goals of the second phase have been achieved, the most important of which is the liberation of Nate’ and Nu’man administrations with an area of ​​380 square kilometers in Al-Baydha province.

Takfiri groups, including ISIS and al-Qaeda, have been severely damaged, and the number of Takfiri elements killed in the operation has risen to 160, with more than 200 wounded. Also, with the help of God, our forces have captured dozens of Takfiris.
Dozens of military vehicles and armor have been destroyed and burned, and various quantities of weapons have been captured.

About 500 square kilometers of Al-Sawmaah, Al-Zaher, Nu’man and Nate’ districts were liberated during Operation Al-Nasr Al-Mobin.

The total casualties of takfiri groups in the two phases of Operation Al-Nasr Al-Mobin reached 510 people and injured 760 people.

Various units of our armed forces participated in the second phase of the operation, and the drones conducted 19 reconnaissance and offensive operations, and the missile force carried out 13 operations against the enemy using the Badr and Sa’ir missiles.

Security agencies and local officials worked with the Yemeni armed forces to restore life in the liberated areas.
The crimes of takfiri groups against citizens and property have been recorded and documented .

The enemy coalition provided medium and heavy weapons and ammunition to the elements of al-Qaeda and ISIS, and provided full facilities for the access and deployment of the elements of ISIS and al-Qaeda in al-Baydha province.

During the second phase of Operation Al-Nasr al-Mubin, the coalition in support of the Takfiris carried out 67 airstrikes on our positions.
After the defeat, the coalition moved the Takfiris to the occupied territories.
We have all the documentary evidence to prove the connection between the coalition of enemies and the takfiri groups.

Our people are aware of the reality of the American plan implemented by the coalition of enemies and those involved in it, and what happened in Al-Baydha province is part of it.
We appreciate the great role of the Al-Baydha tribes and their honorable sons in this battle, as well as the great role of the local authorities in the province.
Our people will continue their jihadist path under the leadership of “Sayyid Abdul Malik Badruddin Al-Houthi” until they achieve sovereignty, independence and freedom of the lands of the Republic of Yemen.
We say to the people that your armed forces will not hesitate to take the necessary measures to strengthen their defense capabilities and military position to prevent aggression and its mercenaries, and we seek to continuously carry out better military operations against the enemy than aggression until the aggression is stopped and the siege is lifted.