Secretary General al-Nujaba: We will avenge the blood of Soleimani and al-Muhandis + Video 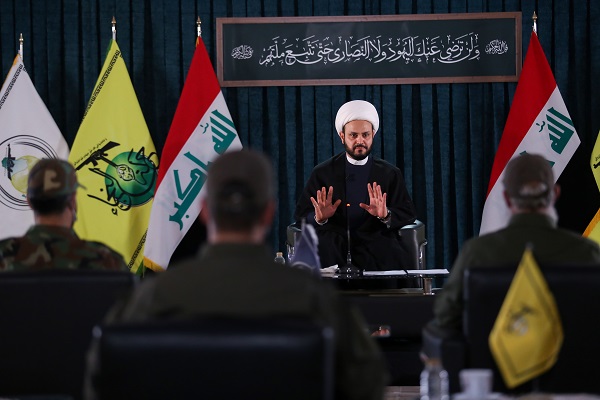 ISWNews Analysis Group: During a meeting with the commanders of eight Iraqi resistance groups, the Secretary General of the al-Nujaba stressed the need to maintain the weapons of resistance and confront the occupiers.

On December 9, Sheikh Akram al-Kaabi, the secretary general of the a-Nujaba, met with the commanders of the eight resistance groups that formed after the martyrdom of Haj Qasim Soleimani and Abu Mahdi al-Muhandis and announced their existence with the aim of operating against American forces in Iraq.

Akram al-Kaabi Secretary General of the al-Nujabasaid: “The United States has the tools at its disposal in Iraq to work on its interest. Fighting this country is our religious and national duty. The American regime today has arrogant and colonial projects not only in Iraq, but everywhere, and seeks to impose its influence on the whole world. Imam Khomeini called the United States “The Great Satan” and even if the United States leaves Iraq, it is our enemy and will never be a friend of the Iraqi people.”

Referring to the Iraqi government’s talks with US officials regarding the withdrawal of US troops from Iraq, al-Kaabi said: “US commanders clearly and unequivocally emphasized that they will not leave Iraq by the end of this year, And this shows that the Americans do not respect the sovereignty of Iraq. Undoubtedly, the only language that the United States understands is the language of the weapon of resistance, and they do not understand any other language than this.”

At the end of his speech, he announced: “God willing, we will avenge the blood of all the martyrs, especially Haj Qasim Soleimani and Haj Abu Mahdi al-Muhandis. These are crowns on us and a great honor for Iraq.”

The Iraqi Resistance Coordination recently issued a warning statement against US forces stationed in the country. The statement announced the date of the final confrontation with the US military is on December 31, 2021 after midnight. So far, more than 49,000 people from various Iraqi provinces have registered to fight the American occupiers.

Despite consultations and diplomatic efforts by the Iraqi side and talks with US officials, the statements by the US military commanders indicate that they have no intention of leaving Iraq; So after the failure of talks, resistance groups decided to confront the US occupiers in Iraq for good.

Read more on the topic:
The Iraqi Resistance Deadline for the US; Are Iraqis Going to Expel the American Occupiers with Force?
White House: There is no American combat force in Iraq!
Joint statement of the fourth round of strategic talk between Baghdad and Washington