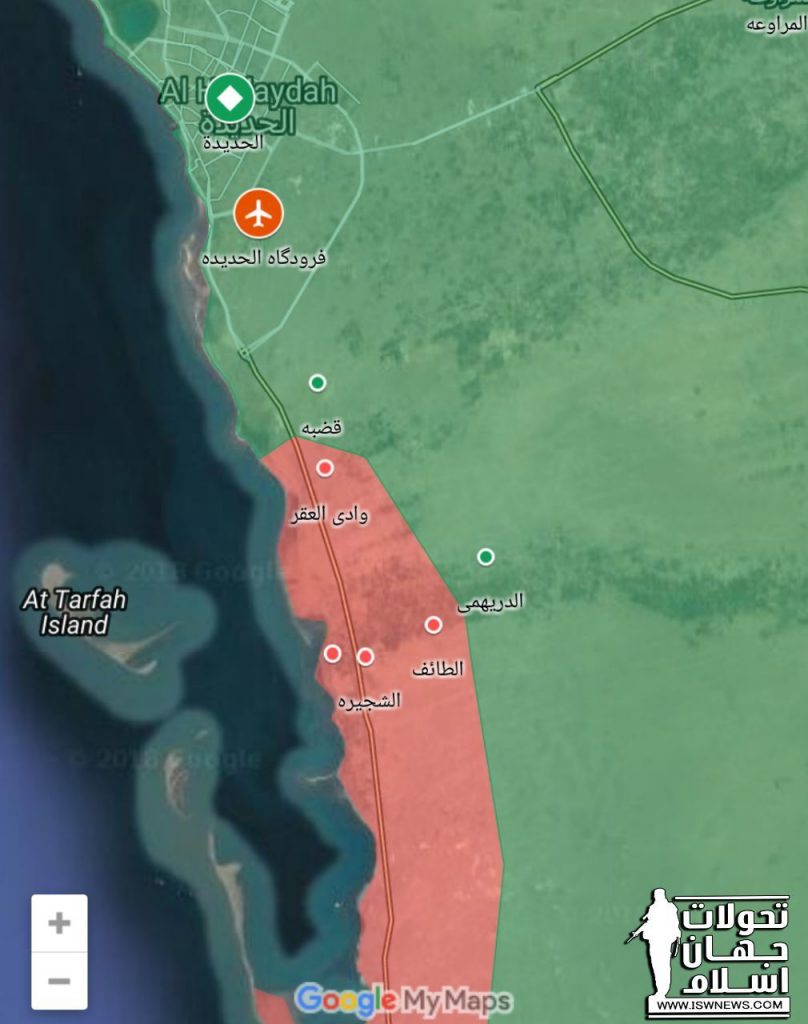 The British Department for International Development (DFID) warned the humanitarian organizations about an imminent attack on al-Hudaydah:

“We are doing everything in our power through diplomatic channels to prevent the attack on al-Hudaydah, but in spite of these actions, the military offensive is now imminent.
The Emiratis today informed us that they will now give three days for the United Nations [and their partners] to leave the city.
Please take all necessary precautions to prepare for this and tell us if there is anything we can do to help you in any way.”

“We are deeply concerned that life-saving organizations do not have the security guarantees they need to work safely in Yemen; All parties in Yemen conflict must allow the safe and unhindered humanitarian access to all parts of Yemen.“

According to the latest news from Taef front, Al-`Aqar captured by Coalition and Ansarullah’s defensive lines were transferred to the south of airport in Qadbah region.

In al-Faza and Hays axis, the feint attacks of Ansarallah continue.

“Images: AnsarAllah attacks to UAE-Backed force in south of al-Fazah

A newly constructed cholera treatment center run by the international medical humanitarian organization Doctors Without Borders/Médecins Sans Frontières (MSF) in Abs, Yemen, was hit by an airstrike Monday at approximately 5:40 am.

Due to Saudi aggressions the MSF said that they temporarily stop their activities in Abs until the safety of its staff and patients is guaranteed.

4- In Taez front the Coalition attacks to cut the Hajda-Barah road continue, till now most of attacks repelled by AnsarAllah.

It should be noted that the Coalition forces are highly concentrated on this road.

5- Counter attacks by Mansour Hadi forces in al-Motun district has been repelled by AnsarAllah.

AnsarAllah and the Army may advance towards the Hazm or al-Ghayl to fix this area.