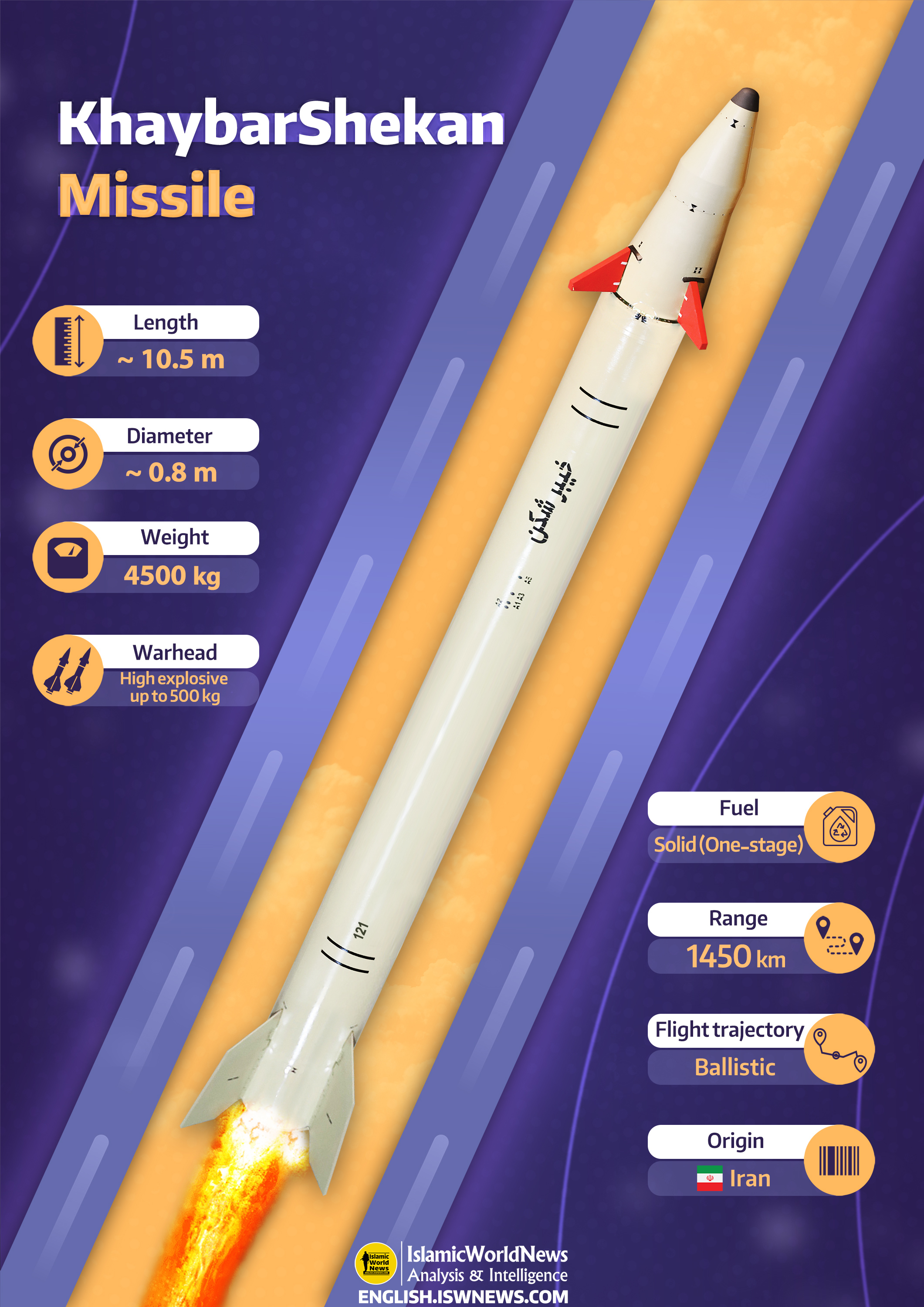 On February 9, 2022, during the visit of the Chief of General Staff of the Iranian Armed Forces, Major General Mohammad Bagheri, and the Commander of the IRGC Aerospace Force, Brigadier General Amir Ali Hajizadeh, to one of Iran’s underground missile bases, the Khaybar Shekan (Khaybar Breaker) tactical short-range ballistic missile was unveiled.

The unveiling of this missile on the eve of the forty-third anniversary of the victory of the Islamic Revolution of Iran, and especially the unique name of this missile, attracted many attention and reactions around the world. “Khaybar” refers to the famous war between Muslims and Jews in the early years of Islam and the victory of Muslims over the Jews after Imam Ali (as) threw down the door of the final fort.

The first thing that catches the eye in the Khaybar Shekan missile is the relatively larger dimensions of its warhead movable fins. Increasing the size of the fins, increases the maneuverability of the warhead after entering the atmosphere and allows for more sophisticated and faster maneuvers in order to pass more effectively through layers of in-atmosphere anti-missile defenses such as the David Sling and Patriot.

Unfortunately, the exact details of the missile, such as weight, length, diameter, warhead weight, etc., have not been officially provided by Iranian officials; But according to estimates, the diameter of the missile is 800 mm and its length is about 10.5 meters.

Due to the reflection of light from the missile body and its texture, it seems to be a composite body material, which means low deadweight of engine. Therefore, the missile weighs between 4.5 and 5 tons, assuming the weight of the warhead is 500 kg, which is a unique number for a short-range ballistic missile with a range of 1450 km. At the time of unveiling, it was mentioned that the weight of this missile has been reduced to one third, which is consistent with one third of the mass of the 15-ton Qadr S missile.

Extreme agility and speed in hitting targets at a range of 1450 km is one of the main capabilities of this missile.

As mentioned, this missile is based on the Dezful missile and with a weight of 30% of liquid fuel missiles, it has achieved the range of the same missiles. Therefore, this missile has solid fuel, and due to the reduction of dimensions and weight of this missile, it is possible to use two missiles of this type on dual launchers.

Smaller missile dimensions have significant advantages. The smaller the missile, the more missiles can be stored in the confined space of underground missile bases. Also, the need for drilling to increase the length of the tunnels and the cost and time is reduced. It should be noted that in the past, due to the lack of space for missiles, the IRGC Aerospace Force implemented the idea of multi-floor missile depots.

Another advantage of reducing the dimension of missiles is the use of a wide range of launchers; So that the Khaybar Shekan ballistic missile can be launched from the Iran Khodro Diesel’s Aria 10-wheel launcher. This truck has recently joined the Iranian Armed Forces.

Another item that was revealed with the unveiling of Khaybar Shekan missile is the use of a dual launcher that have the ability to carry and launch up to two Khaybar Shekan short-range missiles. Until now, short-range missiles, such as Iranian Qiam missiles with a maximum range of 1,000 km, were carried by the launcher as a single unit; Increasing the number of missiles means increasing the firing rate, which is a very effective and proven tactic in overcoming on missile defense systems.

Another important issue that occurred during the unveiling of the Khaybar Shekan missile, which led to much speculation, was the naming of the missile and the type of warhead: Khaybar Shekan (Breaker). At first, it looked like a bunker buster warhead, but with the release of more footage of the missile firing and hitting the target, the bunker buster warhead theory was rejected due to the angular impact on the target and how it exploded instantly. Of course, the possibility of developing a bunker buster warhead for this missile is quite possible. However, in the unveiling footage of the missile, the missile uses the HE warhead, which according to the commander of the IRGC Aerospace Force, Sardar Hajizadeh, the explosive used in the warhead, is several times more than its TNT equivalent, and provides more explosive power. Therefore, a combination of RDX and HMX has probably been used to provide such performance.