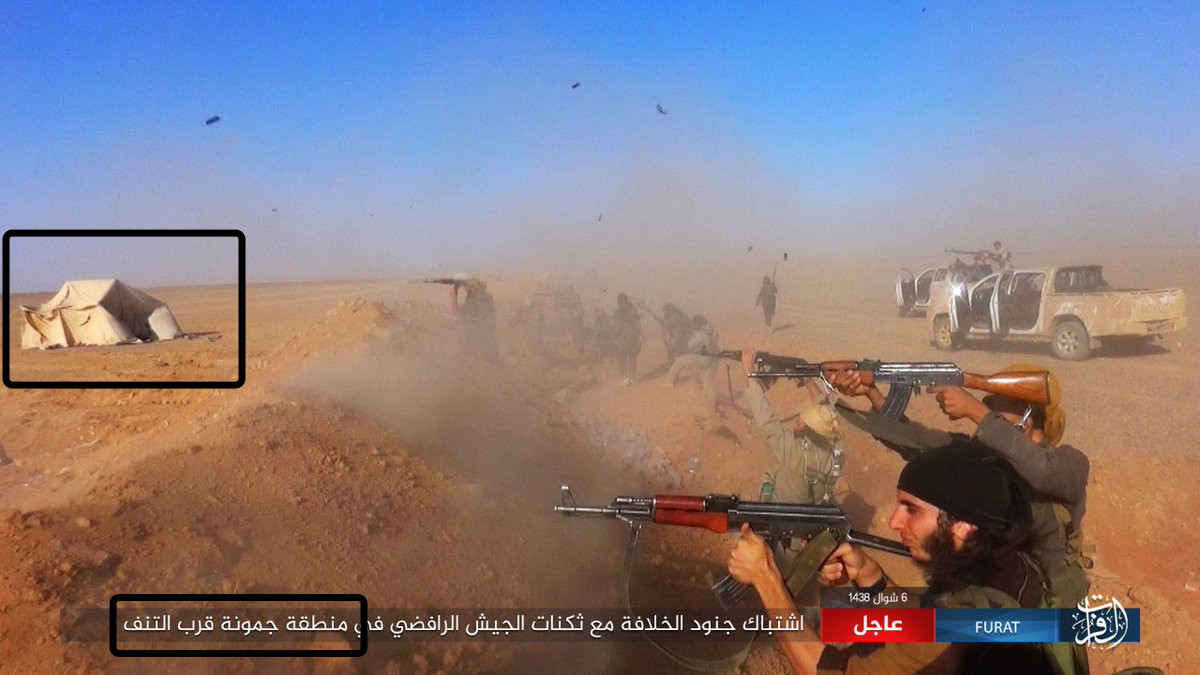 The desert area between Iraq and Syria has been controlled by radical jihadists for a long time. Both Syria and Iraq have been unable to secure this large area and it has become a foothold used by al-Qaeda and ISIS.

As the ISIS influence had been growing, the roads in this desert area became an important supply line used by ISIS to transfer infantry, weapons and military equipment.

With the start of the ISIS decline about a year and a half ago, the terrorist group made a special effort in order to maintain control over the desert. Constant Syrian and Russian airstrikes on ISIS targets and a lack of the support from local tribes were undermining the ISIS power in the area. At the same time, ISIS remained very powerful on the Iraqi side of the border even in 2017 when the key ISIS stronghold of Mosul was liberated in the country.

The successes of anti-ISIS forces in Mosul, Palmyra, in central Syria and along the Syrian-Iraqi border and the start of the battle for Raqqah, ISIS increased operations in the Akashat desert.

In genreal, ISIS conducts surprise attacks with one or several  suicide bomber then shell its opponents with heavy gun fire from multiple directions. Then, if the terrorist group wants to capture the area, ISIS infantrymen join the operation.

The area of ISIS attacks in the Iraqi desert is highlighted (yellow) in the map below. ISIS has conducted at least 7 relatively large attacks the Iraqi army since the Syrian army and its allies reached the borders bypassing the al-Tanf area earlier this year.

One of the  previous attacks also took place in Al-Jamouna area. Following images show it. The map below shows the overall situation in the area.

According to the PMU statement and local sources the US-led coalition conducted military strikes on fortified positions of the PMU located about 2 kilometers from the Syrian-Iraqi border, inside Iraq. However, the ISIS attack took place in another place in the al-Jamouna area. ISIS repotedly advanced on the newly constructed positions (their exact location is unknown). Considering the available photos and videos, it’s possible to suggest that ISIS attacked PMU units working on establishing fortified positions in order to strengthen their presence in the border area.

Pictures of the ISIS attack:

As usual, ISIS did not avoid releasing evidence that could increase the morale of its member. The ISIS video started with showing 15 dead ISIS fighters killed during the attack against the PMU. Thus, the real ISIS casualties could be higher. It’s clear that the ISIS media avoided releasing all info about the group’s casualties.

In turn, according to various sources, between 40 and 80 PMU members were killed as a result of the ISIS attack and the alleged strikes of the US-led coalition. The forces gathering in an environment that increase their weakness is the biggest factor in this incident.

In general, ISIS conducts its attacks when the resistance forces are the least vigilant. For example, a hour before the morning prayers involves the drowsiness of many forces and the provision of the adequate light. ISIS uses the element of surprise and engages with them in a close combat. Furthermore, ISIS has a wide expirience of clashes in desert areas.

The ISIS video allows to see that the PMU had set up no fortifications to defend its forces. Although, the new base was under constructuion but even the core of the base didn’t have notable fortifications. Many tents were located without any defense.

There were dozens of vehicles and construction equipment that could easily be used for the construction of temporary trenches and fortifications. However, this was not done.